It's been much overlooked until now. Black history in Alberta is put in focus with a series of information panels put on extended display in the permanent exhibit space at the Musée Héritage Museum.
0
Mar 5, 2020 2:00 PM By: Scott Hayes 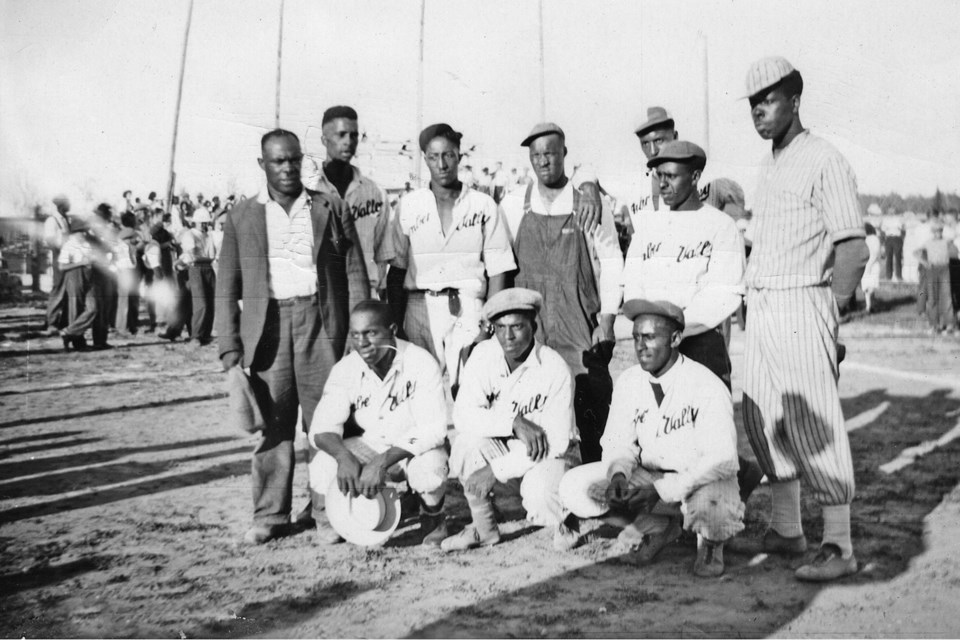 An Amber Valley baseball team c. 1930. Amber Valley (located approximately 170 km north of Edmonton) was one of several communities settled by Black farmers who found laws in Oklahoma to be too restrictive and racist. The community finds a focus in a temporary feature that has been added to the permanent exhibit at the Musée Héritage Museum that will stay on display until the end of April. ATHABASCA ARCHIVES 03237

Even though Black History Month is now over, Alberta’s Black history is getting an extended spotlight at the Musée Héritage Museum, thanks to new feature panels that have been added to the permanent exhibit space.

While the museum’s staff have actually been in talks about it for a number of years, it wasn’t until two local groups – Africans and African Descents in St. Albert as well as the Shiloh Centre for Multicultural Roots – approached them last year that real progress and plans could be made.

Museum director Shari Strachan said it was a community-driven function much like what the Musée did a few years ago with the Michel Band. That exhibit was curated by members of the Michel Band Council themselves.

“It was driven by what we were learning here at the museum from those involved in the community. I guess that's often called the grassroots. We want people in our community to tell their stories, not necessarily for us to go out and tell the story. We want them to have a place in the museum too,” Strachan said.

“It was the perfect year when we got approached by the Descendants organization to say, ‘Let's partner ... you tell us the history.’ Of course, then they were able to give us their own personal objects and things to reflect their history that we were able to put up in cases.”

Much of the exhibit focuses on Black history throughout the rest of the province and is not necessarily specific to the immediate area around St. Albert. That is primarily because this was not one of the major centres for Black settlers.

In the early 1900s, places like Wildwood, Barrhead, Breton and Amber Valley became destinations for Black settlers coming from Oklahoma and Texas. They were escaping racism and restrictive communities and looking for places where they could live, be free, work their own land and congregate.

Amber Valley was an especially successful community as it survived not only the Great Depression but also the Second World War. Located east of Athabasca, it was populated by 300 during its height but those numbers grew on days of religious services or other community celebrations, a phenomenon that occurs to this day.

The panels provide deeper looks at the local histories of these communities as well as some of the individuals who are connected to them. You may know Jesse Lipscombe from his acting, his activism or even back to his days as an athlete. He’s a fourth generation Albertan who is the descendant of settlers whose great-grandparents homesteaded in Amber Valley to escape Jim Crow laws of racial segregation and the Ku Klux Klan.

There are also the stories of Essie Agbozo who came here from Ghana, plus Marilyn McGreer who moved here from Jamaica.

Helen Agbonison is also featured in the exhibit. Nigerian-born, she has lived in St. Albert for ten years and has since become one of its biggest cultural spokespeople. She established the Africans and African Descents group, which also held its inaugural Taste of Africa celebration on the weekend. Through that group, she also successfully petitioned the city to recognize Black History Month for the first time.

All of these accomplishments are not lost on Agbonison, who realized that planning on this exhibit started late so it was not as comprehensive as she would have hoped otherwise; however, it does leave a wonderful starting point for more in-depth exhibits in the future.

“I’m just thankful that I could start something and it grows on to something that is accepted all over the city and it increases knowledge about the other cultures that exist here,” she said.

She remarked how she has heard from many people throughout St. Albert who experienced the exhibit and had direct connections to those settlers in Amber Valley and other Black-settled communities.

“Hearing that story being told now, they now want to connect with some of those people they knew as children in those days,” she continued, noting how Marilyn McGreer was so excited to be able to tell the story about her family as she had been looking for an opportunity like this for a long time.

"Coincidentally, she had just called the museum, saying that she's had pictures from her family for years, decades ... wondering what to do with it. The museum was so welcoming ... there are people like that that have been here for decades. They were so happy that they had an opportunity to document their story and have it saved in the museum for other people to read about."

Apart from the prospect of planning another exhibit as well as looking forward to a return of the Taste of Africa, Agbonison said that the Africans and African Descents group is hoping to establish other special events as part of St. Albert Culture Days in the fall. They also plan to participate in this year’s Rainmaker Rodeo parade.