Bombshell will blow you away

Bombshell is the movie that everyone needs to see this weekend, not Star Wars and Cats.
Dec 20, 2019 3:20 PM By: Scott Hayes 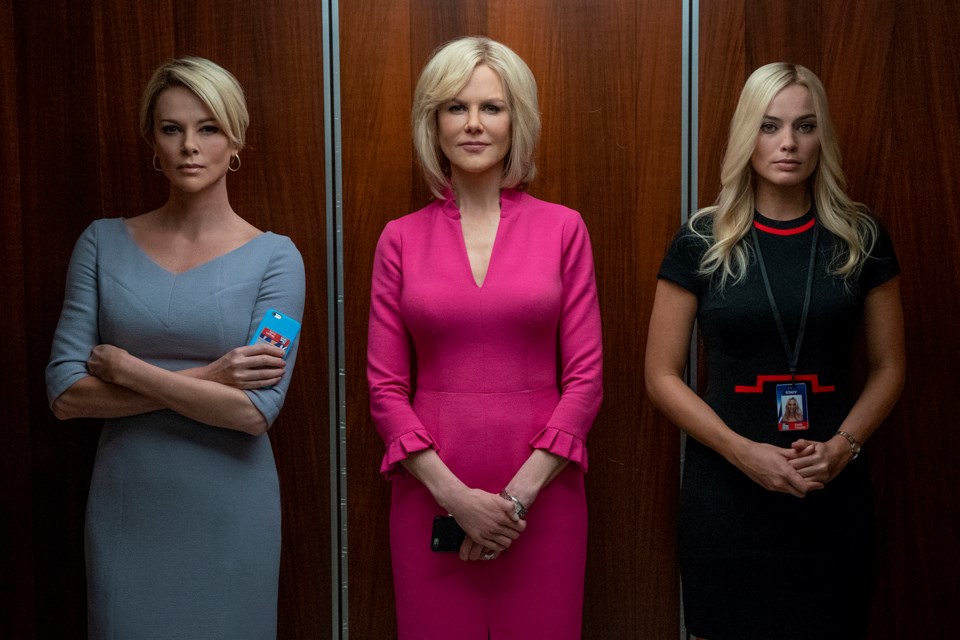 Megyn Kelly (Charlize Theron), Gretchen Carlson (Nicole Kidman), and the fictional Kayla Pospisil (Margot Robbie) cross paths literally and metaphorically in a pivotal scene of Bombshell, the based on real life story about how several women (starting with Carlson) came forward with sexual harassment allegations against Fox News CEO Roger Ailes a few years ago, leading to his high profile dismissal and the onset of the #MeToo era.

Rated: 14A for coarse language, substance use and sexual situations

Forget about any of the special effects-laden big-budget blockbuster movies that might be playing at your local cinema this weekend. Surely none of them are that interesting or relevant. Certainly, they're also too long or seem like they are. Go see Bombshell and thank yourself for making the smart choice.

In case you’ve been living under a rock in this #MeToo world, there was a major metaphorical bombshell that dropped at Fox News a few years ago when two of the network’s most powerful stars (and several others as well) accused its CEO of sexual harassment and assault, leading to his dismissal and a massive lawsuit.

In this movie, Gretchen Carlson (played by Nicole Kidman) gets fired and fires back almost immediately against Roger Ailes (John Lithgow). Ailes is very powerful and runs the network with a loud voice and a loud personality, but it’s his actions that are the most egregious. Women on camera are expected to be beautiful and show off their legs, and that’s just the beginnings of his malfeasances and misdeeds. He’s a jerk is the most polite way to describe him and his behaviour. Toxic work atmospheres start at the top as demonstrated very effectively here.

One of the film’s most intense scenes has him meeting with a young up-and-comer named Kayla Pospisil (Margot Robbie), a fictional character created for the film’s narrative purposes. In his office, he tells her to show him her legs by raising her skirt higher, and higher, and higher, and even higher. His persistence forces Kayla’s dreams of stardom to push past the palpable discomfort and awkwardness. Being in the audience for the moment is enough to boil the blood and make you feel complicit to the act. If this doesn’t drive home how awful it is to even watch a fictionalization of harassment then maybe you should talk more to your wife, your mom and all of your female family members to help you consider the real life damage done by actual harassment.

Perhaps a scene like that is just good directing but it definitely makes for an important movie for women and men to watch.

Caught in the middle between Carlson and Pospisil is Megyn Kelly (Charlize Theron), whose star is still strong at Fox when Carlson gets the boot but Kelly’s truth is whether to add her voice to the growing list of women who call Ailes out on his gross abuse of power and disservice to humanity.

The film is brilliantly done and should be rewarded with a three-way tie for acting Oscars to its tremendous stars in Kidman, Theron and Robbie, whose individual stories have equal weight. The full cast includes some other stellar talents including Kate McKinnon and Allison Janney, who are some of this critic's long-running faves. Part of the movie’s smarts is showing the flawlessness of the women in contrast to the grotesque portrayals of the male antagonists. Behold the incredible facial prosthetics applied to the otherwise lithe Lithgow to endow him with such a chubby neck and rotund physiognomy. Kudos to prosthetic makeup artist Kazu Hiro on this work here.

In fact, kudos all around to those involved in the film, which has already been named the recipient of the Producers Guild of America Award. Also known as the Stanley Kramer Award, it is out during the Oscars ceremony to honour a “production, producer or other individuals whose achievement or contribution illuminates and raises public awareness of important social issues.”

This is one movie that needs to be on everyone’s must-see list. If I could give it six stars, I would have.