The city's new poet laureate Julia Sorensen (with an ‘E’) has big plans for the post, some of which will be online through her social media just for the time-being.
May 9, 2020 8:00 AM By: Scott Hayes 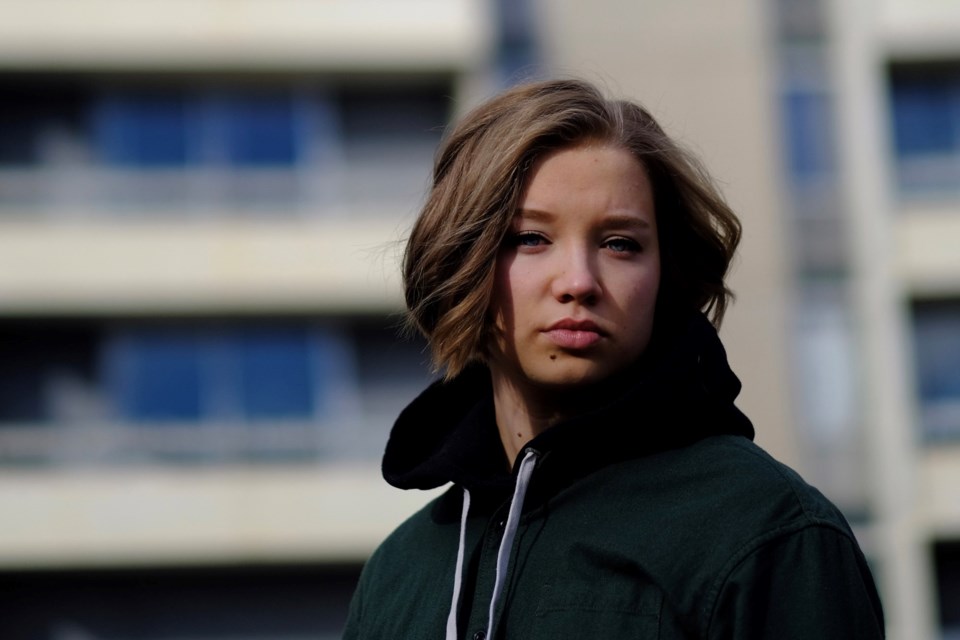 PK Poet coach Julia Sorensen was installed as St. Albert's second poet laureate on Monday. The prolific writer and tireless advocate of the arts read a new poem about vivid dreaming during the ceremony. JULIA SORENSEN/Photo

When your eyes open wide

you are a goldfish who wiggles

through your few rooms, nudging

your nose to the glass with

familiarity. You are a bat peeking

through your wings, wondering

whether it’s light out yet, whether

you shirked instinct long enough to

sleep through the darkness.

But when your eyes close tight

you are a forester who drinks

coffee and watches the trees

in their growing. You have a garden

with gooseberries and peonies for

humour and folly and when the fall hits

you hurry home to the sea.

Then suddenly you are fisherman

into monsters’ mouths when they wake

to swallow your sails. You spend days

on deck and nights down below in a hard

double bed fastened to the floor and

you are alone but happy.

Then you become a rich widow

glazed scones in the mornings. You attend

in the evenings intelligent plays about

the historical politics of your country, cutting

your teeth on the drama and carnage

before going to bed peacefully.

After you are a smuggler who goes

to dog fights and snugs away mongrels

in your deep deep jacket pockets.

But then, without warning, you are bear rising

to cut your own hair in a disappointed mirror.

You are a raccoon at a grocery store whose mask

is upside down but still does nothing.

of your protective pouch and into normalcy.

And when your eyes open wide again

you are not sure how long it was

that you were sleeping.

Julia Sorensen doesn’t miss a beat even when taking on a monumental role. The recent U of A grad is easily coming to terms with her newfound responsibilities as the city’s second poet laureate, a position that at times can be relied upon to be the chronicler of official events and occasions as well as a literary and cultural ambassadorship that reflects on contemporary St. Albert life and its social issues through the power of poesy. She alone can command the soul of the community while also raising the public’s consciousness to a greater appreciation of the reading and writing of poetry.

Being the new people's poet is all in a day’s work, she said just days after her introduction and first public reading at Monday’s city council meeting, a moment that followed shortly after the completion of her post-secondary studies as an English major with a minor in arts and cultural management and German.

“What that means is obviously I love books and I love words and language too, not just this one. I'm looking forward to working in the arts ... working for and with arts organizations,” she began.

“It's really helpful as an artist because then you come to understand how the industry actually works. Also when you work in the industry in one respect then you can also work in it and another as an artist so you can simultaneously support artists and be one, which is the goal.”

Being an artist and supporting other artists is not a new goal for the person who has been the coach for the Paul Kane Poets for three years now. That’s also just how long that she has been involved on the St. Albert Cultivates the Arts committee that organizes the Culture Days festival in late September.

She might be young but she certainly hasn’t wasted any of her years in establishing a strong voice for literary arts and arts in general.

Poetry has been a key part of her life for at least a decade. She remembers that it was in Grade 7 when she wrote a ballad about the movie Titanic, but there was already reams of music lyrics in her hand by that point. She has long held a love for writing songs, which obviously has its own roots in poetry.

“I've been writing music my whole life and I had a real fascination for writing lyrics. There's binders and binders of really terrible songs that I that I wrote while I was quite young,” she admitted. “Those are fun to look back on. It's really interesting because I can remember how all of them go. I've been writing lyrics for a very, very long time and poetry for a very long time.”

Don’t think of her as a “one-trick pony,” she confirmed. She writes a lot of fiction and non-fiction as well. She offered a 32-page self-led creative research project about her family’s experiences as it relates to immigration and trauma and “how those things tend to blur due to memory” to Technische Universität Dresden in Germany last year. It was intense, she admitted.

Outside of academia, she has also had some short fiction and poetry published.

Sorensen admits that she likes to do things a little bit differently. Often when she writes poetry, she “skirts” the main topic.

“I'll be writing about one thing, but then I'll look at it through the lens of something else. One of my favourite poems that I've written recently, you could call a poem about climate change, but you could also call it a love poem. I think they're both simultaneously.”

She says that it accomplishes more, like two birds with one stone, and in doing so it engages a double-sized audience.

For her inaugural address to city council, she read a poem about vivid dreaming. She recognizes that many people’s experiences of the pandemic and imposed quarantining has resulted in more intense dreams.

For those who weren’t able to watch the presentation, she intends to record a video of her reading. She encourages people to pay attention to her social media to view that and stay tuned in to her work through instagram.com/julialsorensen. That’s Sorensen with a second ‘E’, she made sure to point out.