Have you wondered what happened to the importance of neighbours in our all-too-connected world? An event coming to the library on Thursday aims to help people reconnect with their communities.
0
Feb 26, 2020 11:00 AM By: Scott Hayes 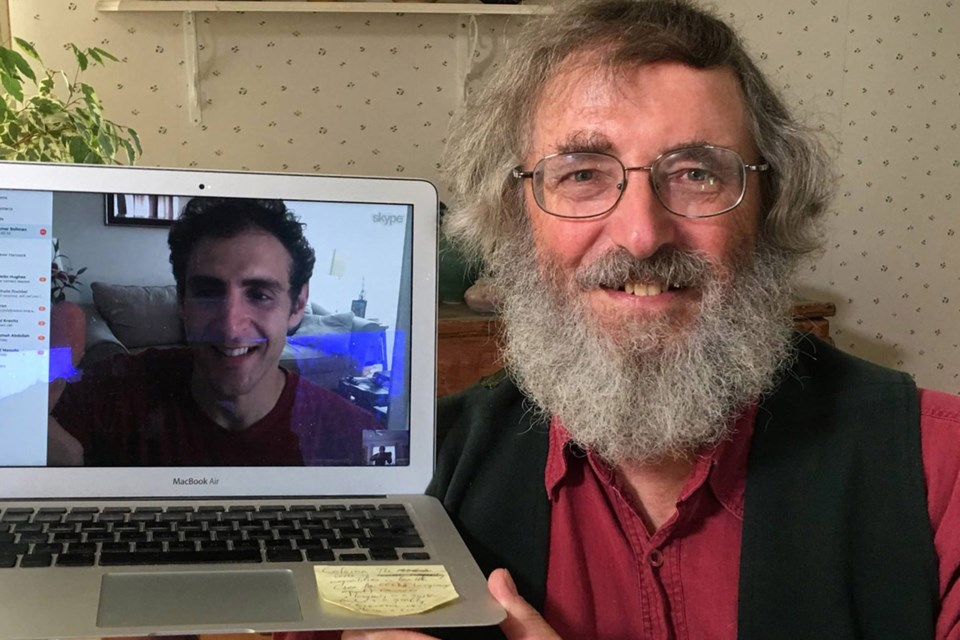 Wellness expert Tamer Soliman (onscreen) and Dr. Trevor Hancock, retired professor and senior scholar at the University of Victoriaâs School of Public Health and Social Policy. Soliman 'Skyped' Hancock for an interview for his documentary The Great Disconnect, screening with a discussion coming to the library on Thursday.

Attendance is free but pre-registration is encouraged. Visit www.sapl.ca for details.

“We have – in North America particularly – exalted personal independence to an almost godlike state. There is no higher value than independence.”

So says writer, community builder and co-housing advocate Douglas Tindal at the beginning of the documentary The Great Disconnect, right before he states, “Social isolation is the medical equivalent to smoking 15 cigarettes a day. It has the same impact on health as diabetes.”

It’s true: we live in a world of mobile phones and earbuds. All around us, people are taking care of business yet immersed in their own insulated little worlds. If you have teenagers with their own cellphones then you have to know the difference between face time and FaceTime. We all know being a part of a community is important yet it seems to be getting increasingly more difficult.

Perhaps that’s why The Great Disconnect is such an important starting place, says Angie Dedrick, the city’s neighbourhood development co-ordinator with Community and Social Development. She will be the host of a screening and discussion of the documentary on Thursday evening. She wants to draw attention to loneliness and social isolation in our neighbourhoods and the issues they bring forth.

“I like how the film examines the topic of social isolation in a time when we seem to be more connected than ever through social media. From a neighbourhood development perspective, knowing and being connected to your neighbours can reduce isolation and have huge impacts on our well-being. When you know your neighbour, you are more apt to look out for them and vice versa. This seems simple, but it has a huge impact on our sense of safety and belonging.”

The film is an engaging treatise on the unofficial Age of Loneliness that we live in. It does more than give us a chance to pause and reconsider how important our relationships are. It reminds us of the vitality of relationships in general. No one is an island unto themselves, so the saying goes.

Nutritionist and wellness expert Tamer Soliman created the documentary because he saw the deeper, broader impacts that such rampant disconnection can have on the overall health of an individual and the world at large.

The idea for the project actually came as a bit of an accident, he explained. He was really trying to make something more about spiritual health, which he confirmed is another extremely important piece of the puzzle of the holistic view of health. Spiritual health comes from a variety of sources, including being able to share your beliefs with others. And that means community.

Now the nutritionist places as much importance on staying in touch with his neighbours and his community as he does on eating right and getting plenty of exercise and sleep.

There will be a discussion after the film presentation, during which participants will also get the opportunity to learn about all the tools and resources that the city has available to help neighbours meet and be connected including Little Free Libraries, Block Parties and Neighbourhood Connectors.