Culture Days hitting all corners – and cultures – of the city 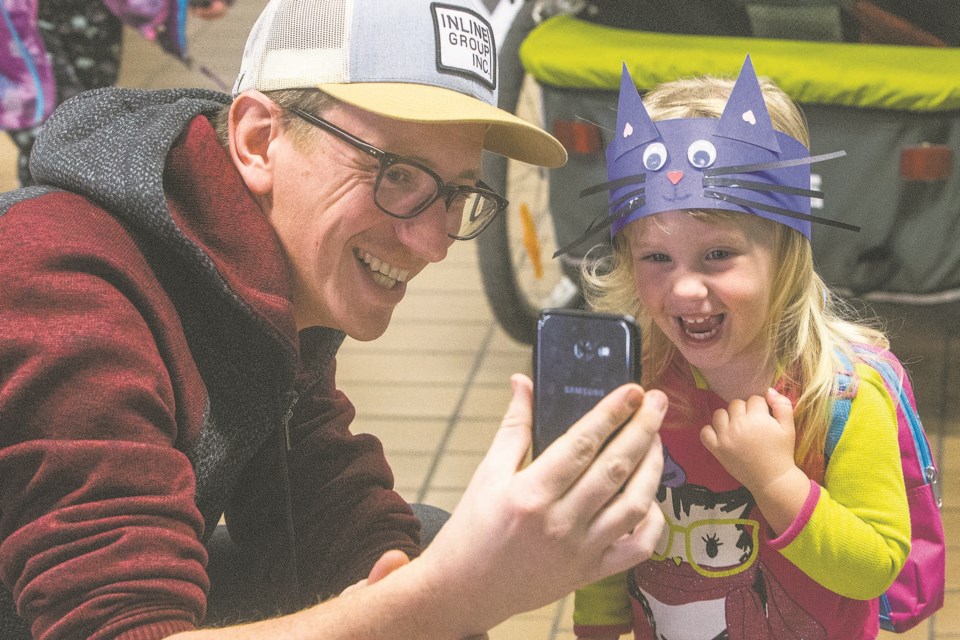 Edith Morrison, 2, of St. Albert is more than pleased with dad Braden's cat headband crafting skills and subsequent photography as the two spent time together at the Get Creative workshop at St. Albert during the 2018 Culture Days. FILE/St. Albert Gazette

If you thought St. Albert’s Culture Days celebrations were chockablock full of activities and events in the past, you should really check out the 2019 programming at stalbertculture.ca. Planning ahead is a big key to getting the most out of this exciting time.

“It is a big weekend. There’s just so much going on this time,” said St. Albert Cultivates the Arts Society co-chair Heather Dolman, clearly a bit flustered for knowing where to start.

“It's great in a lot of ways. It's lots for people to choose from. It's a lot for our little committee to be on top of, I think.”

From visual arts to music to museum exhibits to dance to literary, acting and film programs to paint parties to a grand opening of the new location of a well-established art school, there are dozens upon dozens of things to see and do. With such an agenda ahead, there really is only one way to cover so much ground for a preview: hit the highlights.

Dolman was quick to point out how the scope of the weekend has expanded not only in terms of what will be on offer, but also where and who.

“I think one that's kind of interesting is this: the programs and activities that we're doing over at the River Lot Heritage Sites, because that's all new to everybody. Not a lot of people have even seen those houses over there, and they're still being worked on.”

Look to the Grain Elevator Park and the River Lot Heritage Sites for programming including chainsaw sculpture (with Thomas Fenton), a Pecha Kucha kitchen (with St. Albert Urban Agriculture), watercolour painting lessons (with Doris Charest) in English and also in French, as well as two photography workshops for teens and adults (both brought to you by members of the St. Albert Photography Club).

“We’re pulling in a lot of other partners as well, which I think is great. There are a lot of different organizations and groups in St. Albert that can all work together on these things and let people know what they're doing, even out of the river lot.”

She added how great it is Charest is offering programming in French, a first for St. Albert Culture Days. The programmers are still working behind the scenes to try to confirm other entertainment they hope will represent Indigenous culture also.

In Riel Park, the Big Lake Artists’ Studios (33 Rayborn Cr.) have tons of programming to offer thanks to the 12 representative artists – including painters, mixed media artists, papermakers and a mosaic artist – on site. At Colours and Canvas studio and gallery, Bruce Thompson invites one and all to stop by to contribute to a collective painting that will be live all weekend long. Thompson’s studio mate Lynn Lawson-Pajunen will be hosting a Canvas Art Party that is described as a ‘pouring party’, which sounds messy and fun. This is the second year that these artists have been a part of the big weekend, but only on the second floor of the building.

Right next door but still in the same building, Hidden Talent Art School wants to celebrate its grand reopening (after moving from its longtime Campbell Park location) by “paying it forward” with what owner and teacher Laura Watmough calls ‘The Great Art Book and Magazine Giveaway’ to inspire more creativity and visual arts while also encouraging people to bring in donations to the St. Albert Food Bank. This is a host event and will also be marked by a visit from Minister of Culture Leela Aheer at 1:30 p.m. on Friday, Sept. 27. This one building is now a major arts centre and cultural destination in the city.

As might be expected, there will also be lots of programming at the Art Gallery of St. Albert and St. Albert Place (including at the St. Albert Public Library and Musée Héritage Museum) as well as the Visual Arts Studio Association (25 Sir Winston Churchill Ave.) where you can take in a workshop to create a special cape.

From Sept. 25 to Oct. 12, the Art Gallery of St. Albert is also taking submissions for a collaborative book project called Sense of Place. People are asked to offer small drawings, prints, poems, paintings, photos, or collages on the subject of what makes a place meaningful and makes you feel like you belong. The submissions will then be turned into a series of small hand-made art books, which will then be exhibited at the gallery.

The Pygmalion School of Fine Art is hosting a drop-in art program as well.

People can sign up early for these ever-popular events at venues including the Skybox Grill in Servus Place, as well as Connor's Irish Pub, the Corro Collective, and the Art Gallery of St. Albert. For many of the city’s seniors who love to get in on the action but can’t make it out, organizers are bringing two special paint parties to Ironwood Estates and the Chartwell Retirement Residence.

The sounds of music and voices ... and laughter

If you want to get musical, the Visionary Centre for the Performing Arts will be offering music lessons for the first time ever. Dominelli Music will also be returning by popular demand for its own music lessons and recording sessions. If you really just want to listen, check out the St. Albert Community Band performing during the St. Albert Farmers Market.

Another new venue is Confections Cake Co. on Perron Street where local poesy legend Julia Sorenson will be putting on P...unch, a fantastic blackout and cut-up poetry workshop. Michif Cultural Connections at Juneau House on Mission Avenue has also joined in on the festivities for the first time. Programmers will offer a Cross Cultural Craft Day.

It really seems that St. Albert Culture Days is bursting out at the seams.

“It really just speaks to all the number of groups that have come forward. We plan some specific events but a lot of these are coming from other groups in St. Albert that want to participate,” Dolman said, taking a moment to appreciate the enduring importance of the weekend towards enriching the lives of the people of the city.

“Basically, it provides them with a lot of different things to choose from and to participate in with the hope that in the end it inspires them to perhaps get more involved in arts and culture in the community. It lets them know about our various musicians and artists and in our community as well,” she stated. “I think that's really important: we’ve got a lot to offer here. Whether it be our well-being, our spirit, our souls ... being involved in the arts is good for us in so many ways.”