Free book for your mental health

Leif has a new book for people's mental health. It's the story of his own psychosis and struggle with medications and hospitalizations but it should resonate more strongly with the community at large during these strange times of physical distancing and mass isolation. Alert and Oriented x3 is available for free from his website.
0
May 6, 2020 12:00 PM By: Scott Hayes 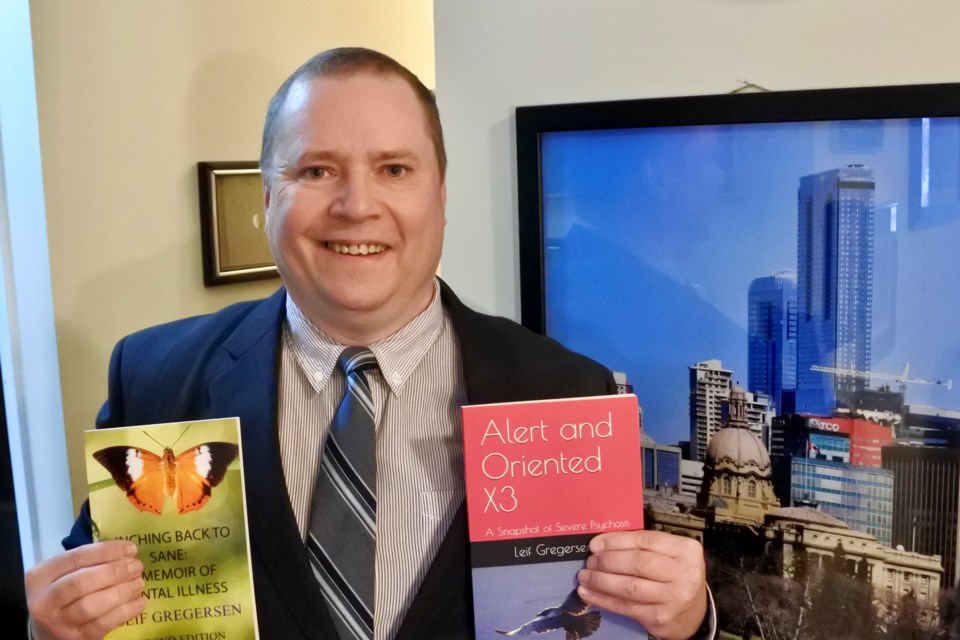 Prolific Edmonton writer Leif Gregersen has a new book out that offers a deeper look at his own psychological troubles but is meant to help the community at large. He's offering Alert and Oriented x3 for free from his website. LEIF GREGERSEN/Photo

May 4 to May 10, 2020 is Mental Health Week. The City of St. Albert recognizes that with COVID-19 life is particularly hard for a lot of St. Albert community members. Need some support?

• Help offered includes support on a variety of needs – from seniors, youth, people with disabilities and child-care support, to food, counselling, housing and shelter support.

• The Canadian Mental Health Association has a variety of resources available at mentalhealthweek.ca. For a list of trusted resources and supports, visit the City of St. Albert’s Help in Tough Times.

Courtesy of the City of St. Albert

Leif Gregersen is the right person for the right place and the right time. In the age of physical isolation and during Canadian Mental Health Week, the St. Albert-raised author has spent a lifetime being open about his experiences with bipolar disorder and depression, and his new book does more than just detail his survival through his most recent struggles.

It reaches out as its own support mechanism to the reader.

Alert and Oriented x3 takes the author back to 2018 when his doctor suggested a new pharmaceutical regime to control his psychosis. It didn’t exactly work out as hoped for.

“My doctor approached me and he said, ‘I have some good news for you. There's a new medication that's going to work better that you don't have to take as often. It’ll help you lose weight.’ He really played it up,” he began, remarking on his initial reluctance to switch.

He changed his mind.

“The new medication, for some reason, simply did nothing for my psychosis. I mean, it's worked miracles for many people. I have nothing against the doctor for prescribing it. I've seen it do really well for people and they liked it a lot more.”

The bigger problem was that it required him to be hospitalized. There were a lot of battles going on in his head, he admitted.

While he was there and had little else to do, he did what any good writer would do: he picked up a pen and notepad and got to work. Gregersen is well known for being productive and prolific, having had several books of poetry, fiction and biography published plus multiple other works either out or in progress. He’s a tireless writer and never misses an opportunity to get words down on the page.

Those words – both poems, essays and more – have become the basis for Alert and Oriented x3, his story of finding himself again. He was even able to include his chart notes. That’s where the title phrase comes from: it’s a nurse’s diagnostic tool to determine a patient’s level of psychosis.

In publishing this book, his objective is to help those dealing with their own psychoses and mental wellness issues, and to give their friends and loved ones the benefit of perspective for their own coping and other purposes.

“I was influenced in a way by the book Girl, Interrupted because the author of that book did a similar thing, where they took actual clinical notes, actual statements from family members and things like that, and put it all into a book. I figured this was going to be something that would really help people to understand psychosis: to feel more compassionate for those that had it.”

That’s why he’s offering the book for free. Go to his website at edmontonwriter.com and click on the picture of the bridge on the right side of the page. The 116-page book is a well-written and comprehensive foray through one man’s life and mind. Don’t be mistaken ... it’s also incredibly easy to read and enjoyable as well.

He has also included an appendix with a listing of mental health resources that should be on everyone’s fridge. The pandemic has forced a strange stress on everyone’s psychology. Gregersen only hopes that his words will offer help so that people can get through it in good mental health.