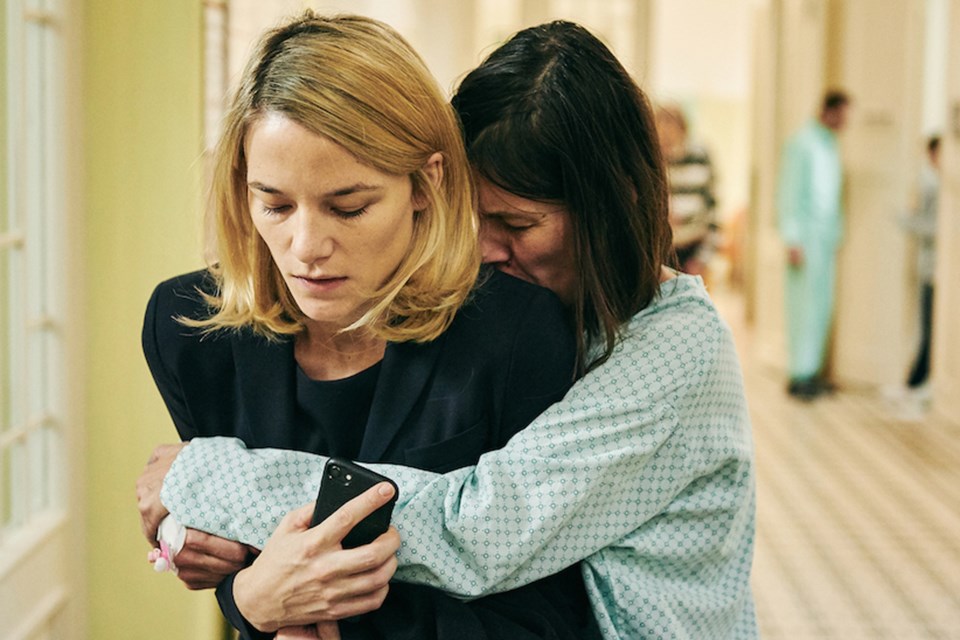 The Ground Beneath My Feet looks at one woman's grip on reality as her ruthless business dealings overshadow her personal life with devastating results. STRAND RELEASING/Photo

Film festivals come and go, but it’s a sign of maturity, longevity and – not least of all – popularity that Edmonton’s Rainbow Visions Film Festival is marking its fifth anniversary with a four-day celebration starting Thursday.

This means it reliably fills a permanent niche within the LGBTQ+ community and the larger fabric of the community in general. Just think that six years ago, Edmonton was the only big city in the country that didn’t have its own LGBTQ+ film festival, said festival’s artistic producer Guy Lavallee.

“We're pretty excited. When we undertook this whole endeavour in 2015, I remember sitting around at a board meeting ... and I remember saying at the time, ‘If we can get through the first three years, that's pretty good, but if we can make it to five years, that's a really big milestone for any organization. Five years is a really solid milestone.

“And here we are five years later. We've got more sponsors than ever before. This is the first year where people were actually approaching us asking to be sponsors instead of the other way around, which is almost unheard of. I think we have actually now found that there was a need in the community in this city to have an event like this and the fact that audiences are showing up and increasing year after year after year and showing consistent growth, it really has told us that that we were correct in our assumptions.”

The feedback he has received over the last four years has been overwhelmingly positive and this has led to a lot of excitement for this year’s edition of the fest.

“For me, back when I first had come out, the festival was a hope bearer. It showed me actual movies that had gay characters, something I wish I would have seen way more of at the time and when I was growing up. Now, the media has caught up and there are lots more LGBT characters, but at the time it was one of the only ways to see the LGBT community portrayed accurately,” said Mia Soetaert, vice-president of the Outloud Foundation for LGBTQ Community Supports and Services in St. Albert.

“The festival is all around amazing and I hope this year is the best one yet.”

This year’s showcase looks like it will fulfill that promise. With more than a dozen films screening over a four-day period, Rainbow Visions has something for everyone: everything from shorts and docs to repeat viewings of big Hollywood movies coupled with brand new features that analyze them and discuss their impact on the world in general and on people individually.

Everything starts Thursday evening and the fest runs through Sunday. All screenings take place at Metro Cinema at the Garneau Theatre, 8712 109 St. in Edmonton. Visit rainbowvisions.ca for more details and ticket information.

If you don’t know Showgirls then you have missed out on one of the strangest wonders Hollywood has ever produced. It’s a big-budget NC-17 spectacular about a young woman with a dream of being a star in Las Vegas. Written by Joe Eszterhas and directed by Paul Verhoeven (the same team behind Basic Instinct), Showgirls tried to be serious but came off campy – or is it the other way around? It’s way overacted, the writing is so cringe-worthy you might need medical attention afterward, and the whole thing is so bad it’s simply shocking. It really is something to behold, an unforgettable nightmare. Somehow, it didn’t get chalked down to becoming an Alan Smithee film, which is what happens when a director disavows his participation on a movie project and instead offers the name of a fictional person.

You Don’t Nomi, on the other hand, is director Jeffrey McHale’s pitch-perfect exploration of the 1995 cult classic, deemed one of Hollywood’s biggest film flops and the Golden Raspberry Worst Picture of the Decade. Somehow, this documentary makes Showgirls better, and that really is saying something.

This opening night double feature starts with a pre-screening reception and cash bar at 6 p.m. and curtains up at 7 p.m. Before Showgirls plays, there will also be a screening of João Dall'Stella’s short film Stalls, about a guy who goes to the restroom in the middle of an opera performance with a very specific mission.

Friday – The Ground Beneath My Feet and Sauvage/Wild

One is the story of a successful businesswoman who has a much more disastrous personal life involving a secret romantic relationship with her boss and a problematic older sister. The other is the story of a young man working the streets as a prostitute. The Ground Beneath My Feet won the Grand Jury Prize Best Feature at L.A. Outfest and Sauvage/Wild took the FIPRESCI Prize Best First Film for Camille Vidal-Naquet at the Jerusalem Film Festival and star Félix Maritaud won the Rising Star Award at the Cannes Film Festival. Both screenings on Friday are preceded by other short films.

Are You Proud? focuses on the LGBTQ+ movement’s fight for equality in the U.K.

The Garden Left Behind is about a young Mexican trans woman in transition as she and her grandmother try to build their new lives as undocumented immigrants in New York.

Killing Patient Zero: Gaetan Dugas was a French-Canadian flight attendant who, through an unfortunate series of events, would be mislabeled as Patient Zero, the man who started the AIDS epidemic.

Scream, Queen: My Nightmare on Elm Street and A Nightmare on Elm Street 2: Freddy's Revenge. Ever thought a bad '80s horror could become a real life nightmare? A Nightmare on Elm Street 2: Freddy's Revenge was called “the gayest horror film ever made” by no less than The Advocate, a highly esteemed gay publication. Unfortunately, star Mark Patton was still in the closet, but the review caused headaches and heartaches due to the overriding homophobia that still existed in Hollywood. His acting career ended just as it was about to begin. Scream, Queen looks into this moment of film history and discusses the ramifications of his inadvertent outing. The film is followed by the screening of the film that started it all.

Straight Up: a young gay man contemplates his own gayness with the help of a young actress facing her own insecurities.

Changing the Game: a look at three high school athletes, all at different stages of their athletic seasons, personal lives and unique paths as transgender teens.

Closing night film The Twentieth Century: It’s Toronto in 1899 when an aspiring politician named Mackenzie King has to choose love between a heroic soldier and a psoriasis-addled spinster.

The Twentieth Century will be preceded by the screening of Edmonton director Trevor Anderson’s short film Docking. It’s a nearly wordless visual statement on the director’s own fear of dating set against a Star Wars-like galactic backdrop. The musical score is a marvel and the special effects are astonishing with credits to Christien Tinsley's Oscar- and Emmy-winning effects house behind American Horror Story and Westworld, cinematographer Peter Wunstorf (he of Brokeback Mountain), and Todd Cherniawsky (Star Wars: The Last Jedi) handling the production design. It really is a sight to behold.