Brad Necyk is a busy artist but he isn't watering down his multidisciplinary work, as evidenced by his recent Governor General's Gold Medal.
0
Nov 28, 2019 12:00 PM By: Scott Hayes 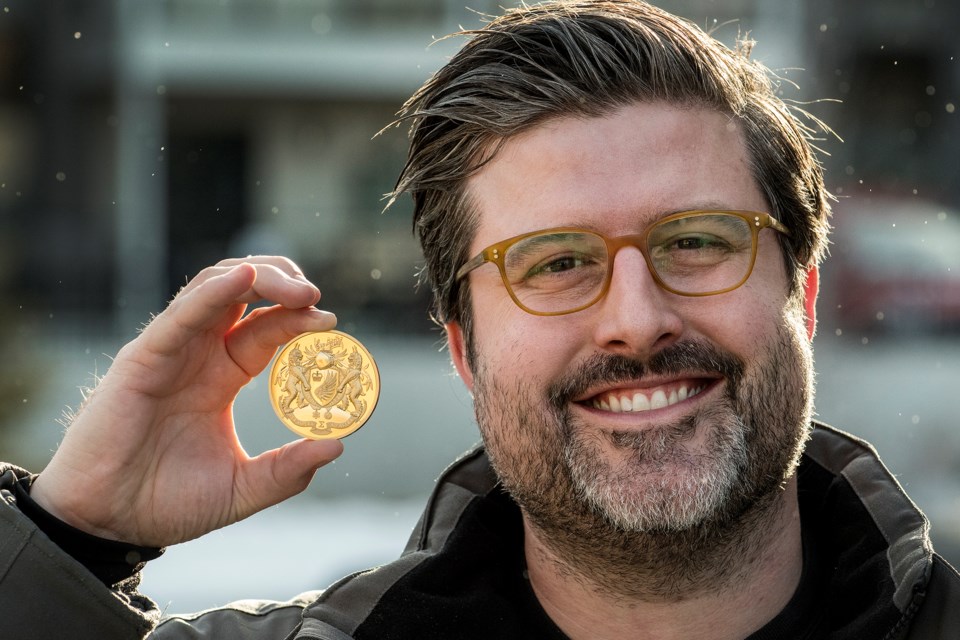 St. Albert visual artist Brad Necyk shows his Governor General’s award that he received during U of A convocation last week for his doctoral thesis as seen in in St. Albert November 25, 2019. DAN RIEDLHUBER/St. Albert Gazette

For most people, successfully defending a doctoral thesis is cause enough for celebration. For St. Albert intermedia artist Brad Necyk, the celebration was capped off with a little something extra and golden, all courtesy of Canada’s Governor General.

The medal, which he speculated may or may not be actual gold, was presented to him during his convocation at the University of Alberta last week. He was nominated by the Psychiatry department, which might seem strange until you understand the nature of the multidisciplinary artist’s work.

His thesis called Telling Stories Otherwise stemmed out of his work with recent transplant patients, head and neck cancer patients, suicide survivors in the Arctic and psychiatric patients at the Centre for Addiction and Mental Health in Toronto. An exhibit of visual and narrative works was on display at the FAB Gallery last year.

“Illness is a vital meaning-making event in people's lives, and the stories we use to narrate our illness to others and ourselves matter deeply,” Necyk wrote on his website at bradnecyk.com to describe the exhibit.

“It was essentially about telling new mental health stories through creative means,” he elaborated. “It was a storytelling dissertation. Parts of it were actual narratives about the research that I was doing. Some parts were methodological chapters on what I was doing and then the other half of the dissertation was all creative work.”

That creative work included visual art, a short film, a play he wrote and other collaborative art. He has presented at numerous conferences, had approximately 50 exhibitions in the last four years and he has a number of upcoming exhibits in Calgary, Montreal and Nova Scotia, too. He is also working on a dance performance with the Brian Webb Dance Company and will be premiering his play in Toronto at the Art Gallery of Ontario next year. If his artistic practice sounds like it might be busy, keep in mind he also teaches at both the U of A and at Grant MacEwan University on top of that.

He’s currently considering a post-doctoral fellowship, which he suggested would be two years of dedicated time to do research on the “lived experience of the mental health impacts of growing up in the Anthropocene.”