Hair-raising competition with a lot of St. Albert colour 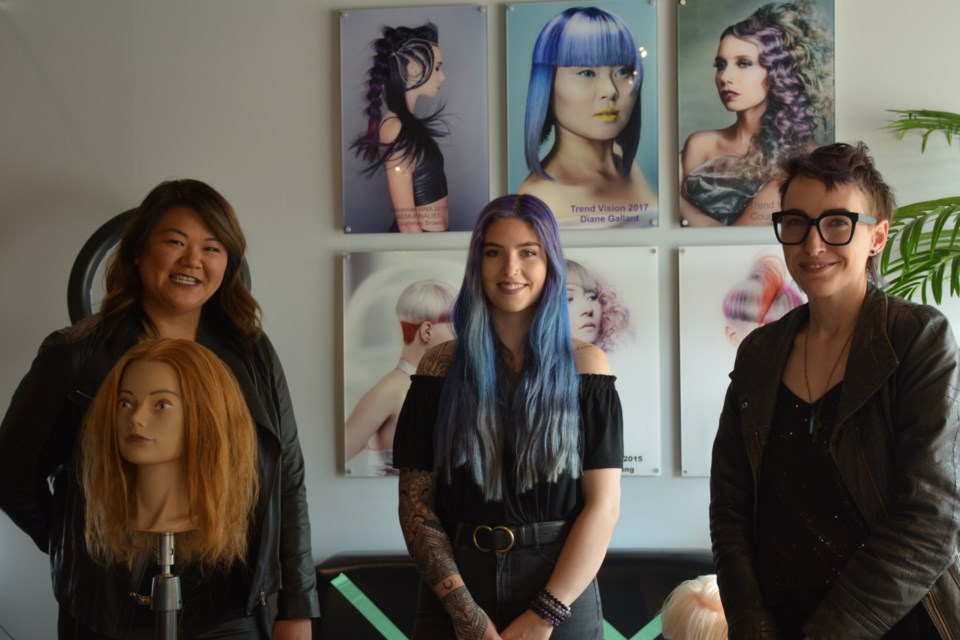 Hairstylists Diane Gallant, Courteney Brown, and Lauren Wilde look poised but they are prepping for the fierce competition of the upcoming BEA Awards, the hairstylist industry's Olympics. It's a virtual competition this year, so they each have a mannequin head to prepare their masterpieces for their categories. SCOTT HAYES/St. Albert Gazette

The Beauty Envision Awards are the Olympics of hairstyling: a competition on an international stage with thousands of people under the pressure-cooking lights of a Las Vegas convention centre.

At least that’s how it was last year. When three St. Albert hairstylists enter the competition this year, it will be through digital photos and videos of unique and creative coiffures on mannequin heads.

C’est la vie, say Diane Gallant and Courteney Brown of Bliss Hair Design on St. Anne Street and Lauren Wilde, owner and stylist at Rose & Onyx in Taché Mews West. Gallant and Wilde are two of the finalists in the Color competition, while Brown is up for Editorial Artist.

“Usually I compete in the creative category, which is a lot more bold. Editorial – what I've learned – is a lot more soft; it's a lot more about creating a balanced image. It's not just solely focused on the hair itself: creating an image that speaks for itself and tells a story,” Brown explained.

The Color category is more self-explanatory but that doesn’t make it any simpler. They will be judged on technical skill as well as creativity and how well their entries exemplify the theme for the year: ‘Fractured’.

Gallant and Wilde, friendly enough in real life, are up against each other as two of the three master colourists.

They have their game faces on and have been putting in lots of extra hours to make sure that their entries are of the highest quality.

The awards (formerly called TrendVision) are a global competition divided up into different categories with more than cash prizes up for the winners.

Hairstylists attend the event to make valuable connections, including mentorship opportunities, with other professionals around the world, as well as to get worldwide industry recognition. Those winners get hailed as trendsetters, and that’s the kind of glory you can’t put on a trophy shelf.

None of these three finalists are strangers to the show. All have competed previously. All know what is at stake. In fact, just making it as a finalist is its own reward as they have already beaten thousands of other entrants.

“There are three right now, and from three, they choose one,” Gallant, owner and hairstylist at Bliss, explained. “For the Color category, I will be representing Canada if I win. And then in the fall, it'll be on a global scale. Typically it's in a European city. This year because of COVID, I do feel a little bit stifled. We feel a little bit gypped out only because… we're not allowed to travel.”

“It's very bittersweet,” Brown added. “We are very, very honoured to be chosen because it's such a big deal but it's been hard. We would have liked to go to the show and have the full experience. This has been cool in some ways, because it’s a mannequin: we can do whatever we want to it.”

Winners in all categories will be announced digitally on event sponsor Wella Education’s social media accounts on August 9.