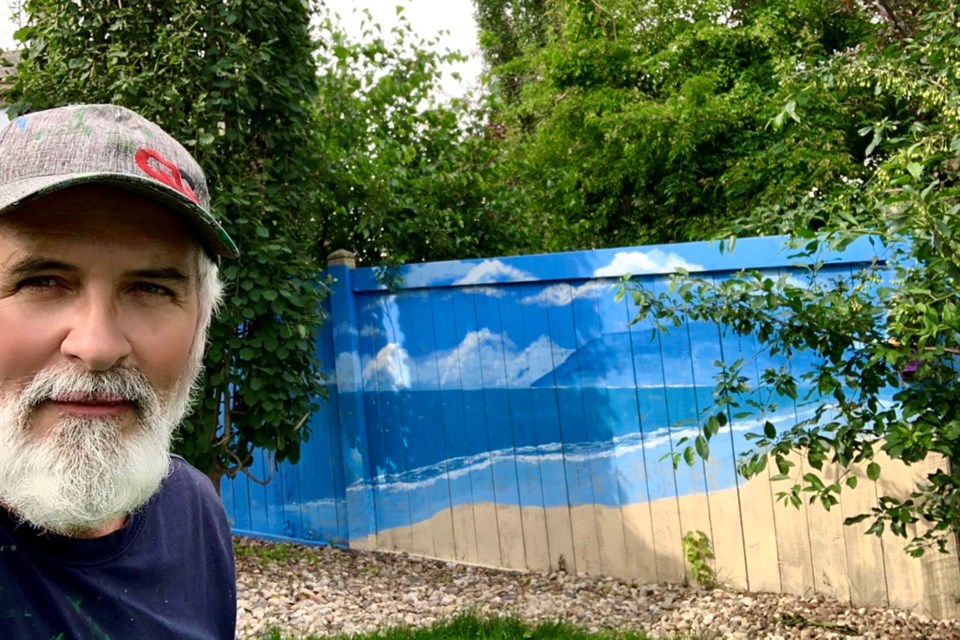 From 50,000-year-old cave dwellers to 21st-century graffiti artists, murals have given humans a way to express their world for centuries.

Closer to home, this popular art form has found its way on all sorts of exterior walls including garages, sheds and fences.

Morinville visual artist Robert Murray is one the latest to dive into this populist art form. His fence landscapes, mountainscapes and seascapes may not decorate great halls, however, they create a serene, relaxing environment for the homeowner.

Murray turns an ordinary wall into an extraordinary scene. His nature-based garden art runs the gamut, from a tree grove surrounding a cool pond or a ship sailing on orange waters during a setting sun, to water mills turning alongside rushing rivers or a lighthouse on a cliff waiting for the tide to rise.

“When I first posted my fence work on St. Albert Chat, my Facebook page lit up with inquiries. With people staying home because of COVID, I’ve already completed 65 since April,” said Murray.

Originally from Nova Scotia, he showed an aptitude for drawing at an early age. After high school, Murray travelled to Red Deer College where he graduated from a two-year art and design program.

“It covered a broad spectrum of art. My first intention was to be an art teacher to young children.”

However, as a member of the Church of Jesus Christ of Latter-day Saints, Murray was called to serve as a missionary in England. Across the pond, he discovered the French impressionists. In particular, Édouard Manet and Claude Monet art had a profound influence on the young Canadian.

“The impressionists immediately struck a chord, and I was trying to use their technique. I admired their skill, the loose compositions and the romance in the paintings.”

Upon returning to Alberta, he met his wife Judy. They were married shortly after and had five children, all gifted with artistic talent.

In the 1990s, his creative juices started flowing once more as he published three books, and for a time, sketched a weekly cartoon strip. He also designed a series of t-shirts as well as painted detailed landscapes on rocks and stones later sold at the St. Albert Farmers’ Market.

“I really honed my palette of colour and light and shadow in painting rocks.”

Through a series of circumstances, Murray inadvertently began mural painting after his mother was admitted to a seniors centre.

“I went to visit her and one day I was staring at a bare wall. I asked permission if I could paint a mural. It was an organic fantasy in the Kincaid style with flowers, trees and leaves.”

The administration loved his concept and commissioned two more works. To date, the prolific muralist has completed 500 pieces.

From painting three-pound rocks to finding himself on a hydraulic lift painting images more than three stories high, Murray has developed a style that incorporates impressionism's romantic vibe.

“When I get a brush in my hand, I’m lost in my world and I love it. It’s a wonderful thrill. For me, it’s therapeutic.”

Murray works with speed and agility completing as many as two fence art pieces a day. In between painting garden art, he’s also been commissioned to create 13 indoor murals for Alberta hospitals.

“My plan is to make the murals a place of tranquility and peace that helps them (patients) reflect on the things that bring them happiness.”

As for the backyard fence art, he said, “With COVID-19 going the way it is, I want to leave people with a piece of heaven.”