Fashion is murder anyway, n’est-ce pas? I mean, who wouldn’t selling their soul to the devil in exchange for the chance to look smokin’ hot in a sexy red dress? That's the question writer/director Peter Strickland seems to be asking in his new stylistic film, In Fabric.
Dec 6, 2019 1:30 PM By: Scott Hayes 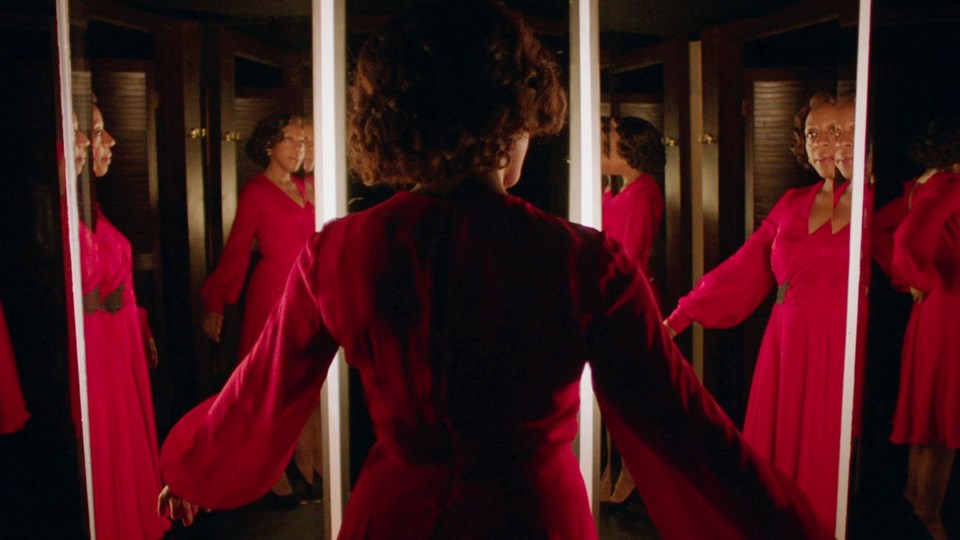 Marianne Jean-Baptiste's Sheila better be careful. That dress knows what she wants and more! In Fabric is a delicious and delightful retro horror with fun directing and a story to boot, plus those colours are to die for. MONGREL MEDIA/Photo

Written and directed by Peter Strickland

Rated: 18A for coarse language, sexual content, substance use, and violence

Haven’t you ever wanted to wear a dress that made people turn their heads, something that looked so good on you that it put your confidence sky-high? Personally ... no, but I get it. Well, In Fabric is about a dress that promises all that, but at a price more than what you see on the little tag dangling from a thread on the hem.

Fashion is murder anyway, n’est-ce pas? I mean, who wouldn’t sell their soul to the devil in exchange for the chance to look smokin’ hot? Again, asking for a friend here.

This is writer/director Peter Strickland’s new film, a mesmerizing tribute to the old giallo horrors with their highly stylized cinematography, strange and unnerving tones, pulpy storylines, salacious plots, and all. This film more than once reminded me of Suspiria, meaning the good Dario Argento version, not the boring and unnecessary remake that came out last year.

Strickland knows what he is doing so there’s no fear of wasted viewing time.

In Fabric starts with Sheila (Marianne Jean-Baptiste), a divorced and middle-aged woman who really could use something special in her life. Her twenty-something son still lives at home and his girlfriend seems to have moved in, too, finding new ways to invade her privacy, stepping all over her authority and feelings and such, making her feel less and less worthy of attention every day. She’s a woman who needs to come back into her own. After she signs up for a blind date, she heads to the department store.

And this is where she meets the saleswoman with that oh-so-close-to-Dracula accent. Things only get stranger from there. It’s not just the after-hours ceremonies the saleswoman is involved in (with a mannequin) at the store. It’s not just how the washing machine destroys itself when Sheila tries to wash the dress. Something sinister is happening and Strickland knows just how to amp it up with retro flair, using dissonant tones on the soundtrack, a colour scheme that’s somewhere between Vegas neon and Kool Aid. It’s not just those high gloss cherry red fingernails. The red lipstick. That red dress ...

In Fabric is meant as much to tease the senses as jar them out of place with flash frame montages and repeated snapshots of age-old fashion catalogues. It bewilders us with not knowing what will happen to the characters next as it delights with how much fun the filmmaking team is obviously having. That, my friends, is sinister. While it might come off a bit campy at times, considering the genre, it works like the sound of two fingers snapping.