Ready and set for the little racers to go

Gravity is revving its engine for the city’s Soapbox Derby. The annual fave is making its triumphant return to Father’s Day after being shuffled to a different weekend in 2018.
Jun 14, 2019 12:46 PM By: Scott Hayes 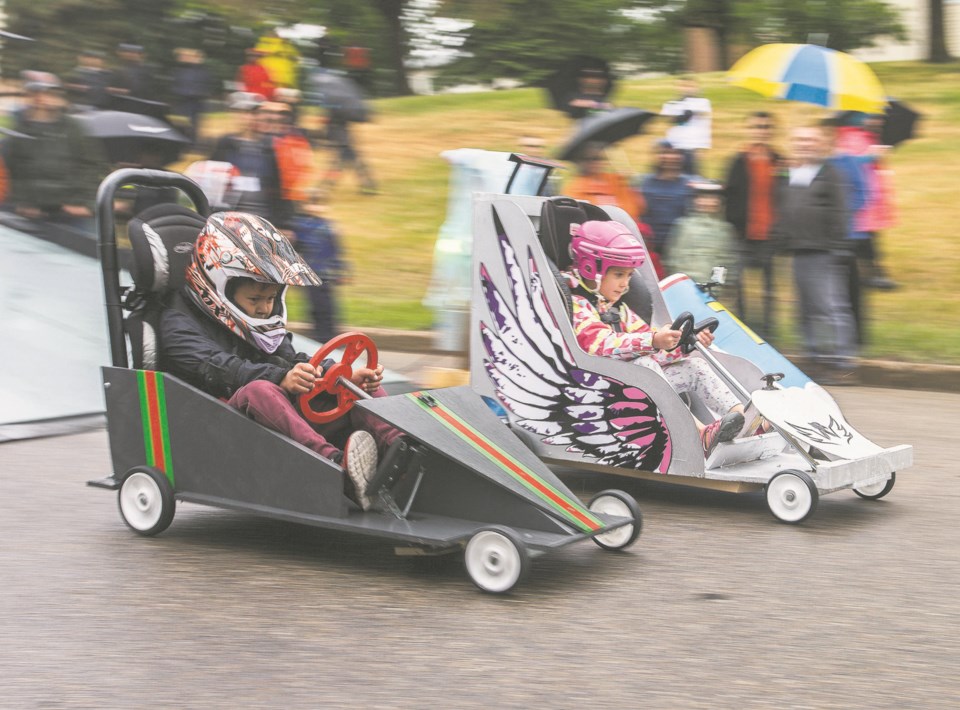 Zachary Skuba, left and Sophia Malikov race in a fast and furous way off the starting ramp and down St. Vital Ave during the 8th Annual Springtime Soapbox Derby in 2018 to the delight of spectators who braved rain and cold to support the racers. CHRIS COLBOURNE/St. Albert Gazette

Gravity is revving its engine for the city’s Soapbox Derby. The annual fave is making its triumphant return to Father’s Day after being shuffled to a different weekend in 2018.

Organizer Cheryl Mackenzie said that the event is now a fixture on the calendar and in many people’s hearts and minds.

“People see it as a really great Father's Day event,” she remarked.

While the number of competitors ebbs and flows, this one looks to be a banner year.

“The leading indicator is the number of kids that come in at the six and seven year (age group) because once they're in, they'll race right through until they age out. They stick around. They love it,” she said. “That always tells me what the next three or four years is going to look like.”

She calls 2019 a “growth year” because that age bracket is the biggest group of them all with approximately one-third of the nearly 60 competitors.

The action gets underway on St. Vital Avenue with the first races starting at 12:15 p.m. on Sunday. The weather looks it will be beautiful for the spectator-friendly event but Mackenzie noted that it runs rain or shine but with the possibility of delays.

The good news is that if the dark clouds come rolling up as they sometimes do, there’s a lightning meter right where the ramp is to give people ample warning to clear the area.

The ramp was donated last year by Fountain Tire (the major sponsor of the event along with Rock’n August). It’s a metal ramp with two tall metal spires, she described, hinting that they might act as conducting rods under the right electrical circumstances.

“We can track how close anything is coming. Last year, we had to stop the races for about 15 minutes while we had some thunder and lightning crossing over. Once it was gone and our meter told us we were all clear, we got back on the track and started running again.”

With safety firmly in mind, the kits that people buy to make their derby racers are also specially designed to keep their velocity more reasonable. The hill can be pretty aggressive, Mackenzie said, so they max out at 30 to 35 kph.