REVIEW: A healthy dose of Greed

Writer-director Michael Winterbottom hits the nail on the head with his new film Greed, featuring Steve Coogan as a billionaire business mogul whose every success in business is matched by a contrasting failure in his personality.
0
Mar 7, 2020 12:30 PM By: Scott Hayes 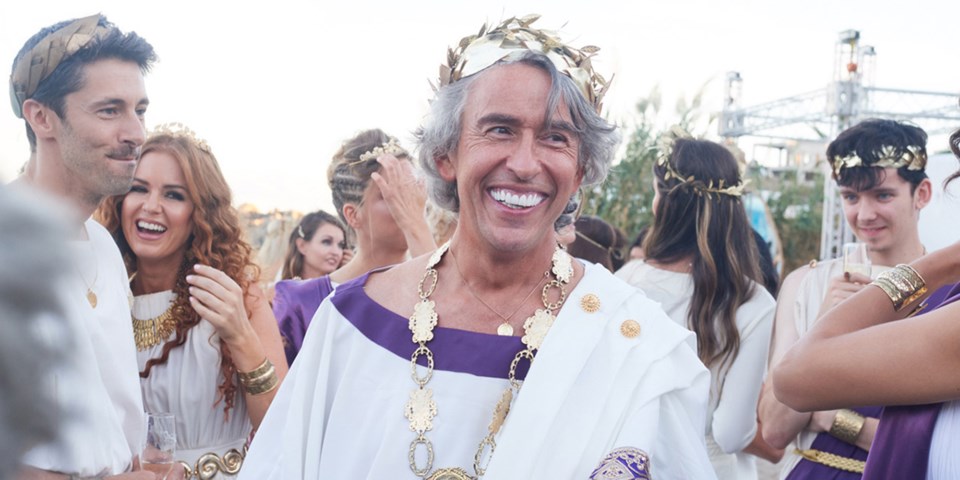 Written and directed by Michael Winterbottom

Now playing at the Princess Theatre, 10337 82 Ave. in Edmonton. princesstheatre.ca

That orange skin. Those white teeth. That sterling ego. Sir Richard McCreadie (Steve Coogan) is indeed the pinnacle of wealth and excess in his career as a billionaire high-street fashion mogul. It’s no wonder that his nickname is Greedy.

At the start of writer-director Michael Winterbottom’s Greed, Greedy is fretting over the delay of the construction of an amphitheatre à la the Colosseum, fretting over the lion he has rented for the gladiator games he intends to host, fretting over the surge of Syrian refugees who have camped out on the public beach nearby, and fretting over the biographer who has shown up to write up his life such as it is. In a quick flashback sequence during his trial, he is described as “the unacceptable face of capitalism.”

He gets called other things during the course of the movie as well. Greed plays out as a faux biography in the same vein as the mockumentary style of This is Spinal Tap. McCreadie gets his egregious attitudes and behaviours from somewhere, so we are treated to flashbacks of his formative years in a boarding school with his tough-as-nails Scottish mother Margaret (Shirley Henderson) who berates the headmaster for being poor as he tries to instill better values in the young lad.

Later, there are scenes of a trial though our ‘hero’s’ braggadocio doesn’t lend much to humility in front of a proper judge either. We thoroughly get the sense of him being a man who simply does not stop until he gets what he wants. I’m sure that there are real life modern-day examples of similarly minded people in power. I just can’t think of them at the moment.

Satire doesn’t come much drier than this, nor more astute. Coogan should get more credit on this side of the pond. He’s a brilliant actor whose informed, invested performances don’t simply blur the line with the role he is playing; he becomes the character time and time again.

It’s a clever drama with spot-on supporting performances by Henderson, Isla Fisher (as Greedy’s wife Samantha), Asa Butterfield (as his son, Finn) and David Mitchell who bears the brunt of the story as the put-upon biographer Nick.