REVIEW: From the murky depths

Disappearance at Clifton Hill is not a tourism ad for Niagara Falls, where the movie is set. A kidnapping is witnessed by a young girl who grows up broken because of it. Solving the crime might just be her salvation, but there's a lot of strings to tie together to do it in writer/director Albert Shin's masterful film.
0
Feb 29, 2020 8:30 AM By: Scott Hayes 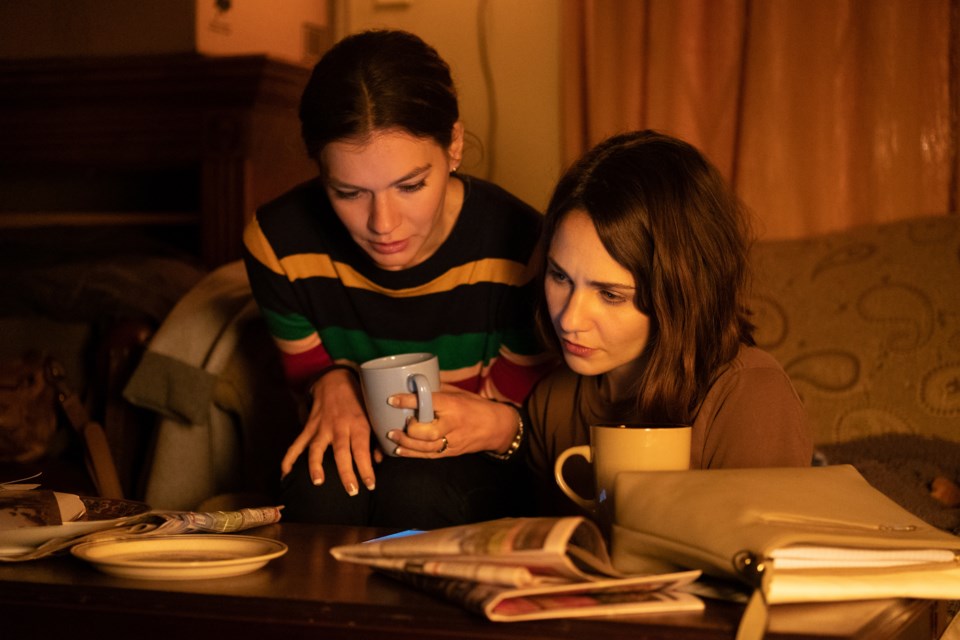 Laure (Hannah Gross) helps her sister Abby (Tuppence Middleton) figure out the clues leading toward the mystery of Abby's witnessing a young boy being kidnapped when she was a child in this scene from Albert Shin's masterful, rewatchable Disappearance at Clifton Hill. ELEVATION PICTURES/Photo

Witnessing something horrible and criminal as a child must be traumatic on many levels. It happened to Abby and it was the single major turning point of her young life. She develops a sad, messed-up life starting as a young girl when, on a family fishing trip, she is the only witness to the kidnapping of a young man already suffering a head injury. He sees her and motions to her to be quiet, and so she is.

She harbored the secret and it festered like a boil on her soul. Disappearance at Clifton Hill has a clever title for that: it isn’t ‘The Disappearance’ because it doesn’t just refer to the boy who was taken. Abby greatly disappeared on her own after that violent event. Later, she went away to get away from the past.

Now grown up, Abby (Tuppence Middleton) has returned to Niagara Falls where the hill is located. Her mother has died and has left the care and control of the failed Rainbow Motel to her and her younger sister Laure (Hannah Gross). They don’t get along though. While Laure’s life never skipped tracks, Abby has become a sketchy character, untrustworthy, shady even. When she walks straight past checkpoints to visit Laure at her security office deep inside a casino, we know it’s not the first time she has figured out the tricks to do whatever she wants.

This is part of the cleverness of writer/director Albert Shin’s film – Abby is ultimately a champion in underdog’s clothing – but mostly it’s the story of her figuring out what really happened that strings us along without a ripple. In some ways, it plays out like a David Lynch mystery, especially with Alex Sowinski and Leland Whitty’s unsettling score putting just the right ‘strange’ edge on what might otherwise be a straightforward story. Niagara Falls presents itself as the glossy tourism hotspot with its neon lights and all, but the plunge pool at the bottom of the waterfall is a great place for things to go missing. There is a seedy underbelly to any place that’s popular.

When Abby digs into the motel’s storeroom, she uncovers a collection of photos taken on that fateful day. It gives her the first clue that opens up that whole proverbial can of worms once more. The film plays like a Canadian version of The Girl with the Dragon Tattoo, what with the weight of memory placed on the story and the importance of old photos to the plot.

Abby, with Laure’s begrudging help, starts to unravel the mystery along with the crucial assistance of a local history podcaster named Walter, played by David Cronenberg. You know that things are going to get funky when he’s acting in it. In some ways, he and the rest of the cast bring just enough levity to make the proceedings not unbearably heavy as Dragon Tattoo did. That cast also includes Edmonton-born Eric Johnson looking like a younger version of Brad Pitt.

All told, Shin’s film is masterfully told, interesting and enjoyable. I see brighter things in his future.