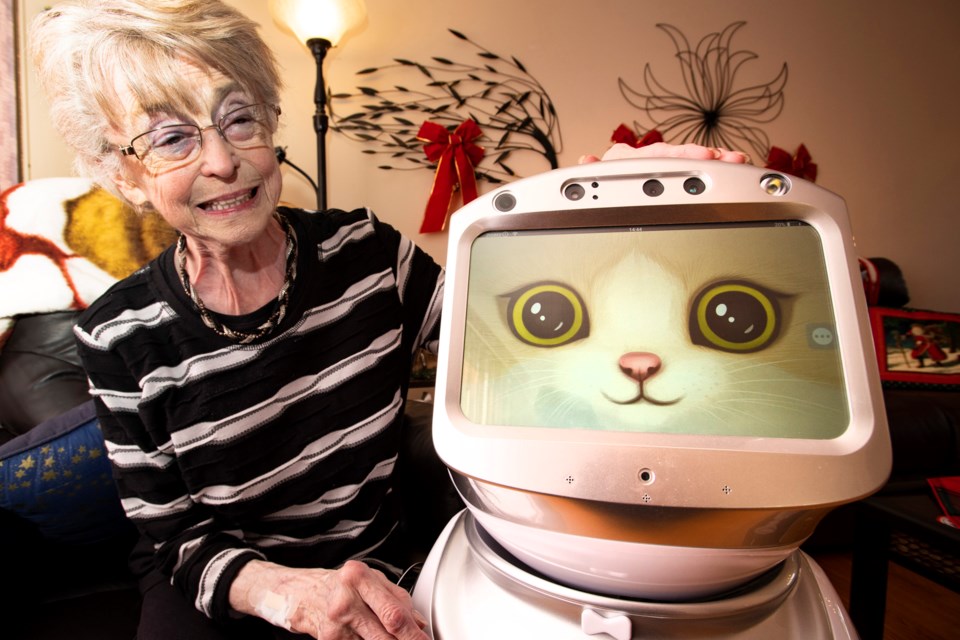 Mirelle Lafleur with a companion robot named Mylo, which she received as a Xmas present from her granddaughter Candace. BRUCE EDWARDS/St. Albert Gazette

Check out Mylo, your elderly relatives’ new best friend and tireless servant. He is plugged in to a lot of ways that he can be a help around the house. He might just be the smartest, too, and is a whiz at making life easier and more comfortable for them – and for you, too, assuming that none of you mind new technologies.

Mylo is the newest personal home robot on the market and not only does it have roots in St. Albert, its first customer home on this continent is here now, as well.

Candace Lafleur grew up here but developed the product through her Ireland-based company, CR Robotics. The project actually began more as a self-help effort when Lafleur herself needed medical assistance in her early 30s after she had a major stroke and still had to care for her one-year-old twins at home.

“There wasn't any medical intervention that they could give me, but they wouldn't release me to go home because there was nobody who could be there 24/7 to make sure that I was okay. I was stuck in hospital for two-and-a-half weeks. I was just raging to go home. I was looking at all these tech supports online, things that can help people to stay home. All I could find was an oversized remote control. That wasn't exactly going to help me do that,” she said, remembering back to the genesis of the kind of tech support she needed and her early sketches of its design.

“I had it in my mind – I was doodling on a napkin – what the issues were and how and what could potentially fix that.”

While she was doing her MBA at Trinity College Dublin, she assembled a team of researchers and developers, sourced parts from China, Poland, Germany and other countries, and brought them all together in Ireland.

The end result: “We made a robot.”

Mylo is designed as a monitoring companion that works to help people – especially those with dementia – to retain their independence while remaining in their own homes. CR consulted with dementia advocates to ensure Mylo maintains high ethical standards as well as high functionality.

It has been on the market in Ireland since late 2019 and has already been installed with a few hundred customers. Its core features include remote monitoring so you can log in on your phone from anywhere in the world and you can essentially “avatar” into Mylo, Lafleur explained, so you can see what it sees and hear what it hears.

“By being able to do that, people are not having to travel constantly to mom's home to make sure she's okay,” she continued. “Instead they can just log in and check: ‘Did mom lock the door at night? Did mom feed the cat? Is she okay? Is she there? Did homecare actually arrive?’ People are feeling quite relieved by that function.”

Mylo also acts as a videophone and will approach the user before announcing there is a call, instead of the other way around, which can pose a risk of panic causing a fall. It also monitors the user’s health and can detect if they fall in the house.

The team from CR Robotics is in the early stages of doing quality of life assessments on not just Mylo’s users but also the users' family members. They have been measuring the impact that ‘he’ – Lafleur’s word – had in improving people’s quality of life.

“Nearly every single metric is skyrocketing up,” she announced. “It's been absolutely fantastic. It's really cool. I really nerd out when it comes to things like this.”

And since CR is a social enterprise, customers don’t buy the product, which would likely be a burdensome cost to most. They rent it for a much-reduced rate and can return it at any time just in case Mylo doesn’t work out so well in the house.

The name Mylo itself was specially designed to be user-friendly as well. When Lafleur was visiting her grandfather in one St. Albert nursing home, there were many other residents with dementia on the same floor. She noticed many of them were calling out for attention.

“They're going, ‘Hello, hello, hello’ and nobody had time to answer. You couldn't fault the nurses because they were running off their feet. That's when I decided that we need to have an activation word like Alexa/Google Home kind of thing. We needed an activation word that rhymes with hello that doesn't rhyme with many other things so it's hard to accidentally activate him. That's when we came up with Mylo so when people call out ‘Hello’, someone will answer.”