The literal and figurative horrors of war

Edmonton writer James Ballard's first novel is an excellent work of fiction about the Vietnam War and how so many of the battles are still being fought far away from the Mekong Delta.
Nov 11, 2020 12:30 PM By: Scott Hayes 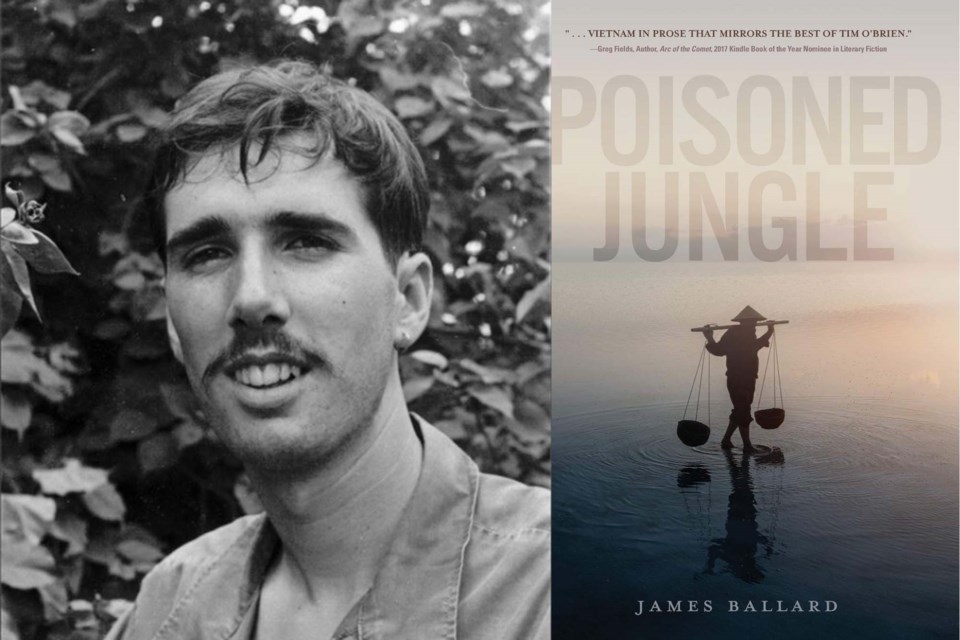 James Ballard's novel about a medic during the Vietnam War is an excellent read, especially for a first-time novelist. KOEHLER BOOKS/Photo

It’s been a half-century since Edmonton writer James Ballard left Vietnam as part of his military service as a medic in the United States army. But, as any other vet would probably say, Vietnam never really leaves you.

Now 71, the retired Peace River region beekeeper has penned Poisoned Jungle, a book of fiction to get some of the horrors of that war – and the war afterward – out of his head and onto the page. He’s actually quite a writer, and his story of a veteran army medic and his quest to overcome trauma in all of its multifarious shapes has the clear ring of disarming authenticity and vulnerability for a first-time published writer.

It’s no surprise after speaking with the author. He’s very well-spoken and reasoned in how and why he focuses on deliberating on the subject of war. In his writing and in conversation, Ballard shies away neither from the ‘war is hell’ theme nor from the many explicit examples of that theme. His primary interest is in examining it closer as a way of dispelling the pain that results from it.

“I wrote the novel, and I'm still writing about the war. It's somewhat cathartic. It's not completely cathartic, but it doesn't trigger all kinds of depressions or anything. Over the years, I've been very interested in the psychological consequences of war, both from a personal perspective and from a societal perspective and I’ve followed the research,” he began, offering further credit to his already built-in qualifications to undertake such a book as this.

The heavily invested story follows a young medic who comes home from his 1969 tour with nothing left to give either physically, psychologically or emotionally.

But he brought the demons back with him and his normal life soon finds chaos overtaking it. The big problem, it seems, is how much easier it is to deal with war. War offered the ease of at least knowing who the enemy was and how knowing your side of the conflict was necessary to continue on.

Living in peace turned out to be the real fight because of how it changed every ounce of you.

“There were just so many problems with the Vietnam War that were cause for what is now being called moral injury," he added, noting he returned from service and continued to live unscathed.

Many others, obviously, suffered far worse and for far less justifiable reasons.

"I'm very conflicted about what our firepower did to the Vietnamese, as well. There were so many civilian war casualties that I saw and treated, and then, of course, the whole Agent Orange controversy, which is partly where the title of the novel comes from. It’s part metaphorical but part literal as far as the chemical defoliants, which not only damaged the landscape – some of it permanently – but also has had an ongoing impact on not only the lives of veterans and their offspring, but has been a big problem in the Vietnamese population. I think coming to terms with my side dumping that kind of destruction through the arsenal of a superpower to the use of the defoliants and the way they were used and the cancer-causing impact of that, there was just really a certain guilt and shame in that my side didn’t have a better reason for going to war there," he continued.

It's fictional stories like Poisoned Jungle that not only offer vets like him the opportunity to process their experiences even further but they also offer their loves ones a way in to start a conversation about the war when it might otherwise be a tricky proposition with a vet who doesn't want to talk about it.

"I've tried very hard not to make it about myself. I definitely don't drift into self-pity, because I was very fortunate; I not only survived the war. I was not wounded. I basically feel I've had a good life and others have not. Others, of course, died, and had lifelong physical and psychological wounds from the war."