Town council is set to borrow almost $19 million this year to finance the construction of the new regional rec-centre.
Mar 20, 2018 11:04 AM By: Kevin Ma 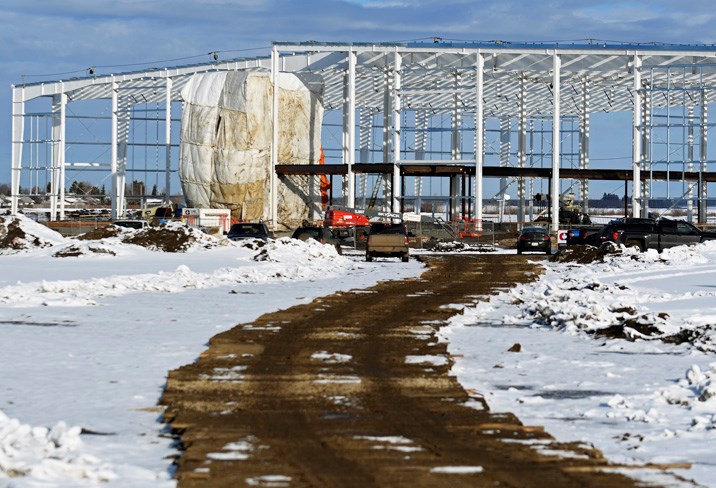 The framework of the new Morinville recreation centre rises from a field on Tuesday.

Town council is set to borrow almost $19 million this year to finance the construction of the new regional rec-centre.

Council approved first reading of a temporary borrowing bylaw last March 13 that, if passed, would see the town open a $6 million line of credit to pay for the construction of Morinville’s new rec-centre.

It’s the first of three borrowing motions planned this year to cover the rec-centre’s $24,611,201 cost.

The town will have paid about $4.9 million of that by the end of March, leaving it with about $18.8 million to go, town corporate and financial services director Shawna Jason said in an interview. It hopes to cover about $6.1 million of that through sponsorships and the rest through long-term loans.

“The faster we get that (sponsorship) money, the less I have to debenture.”

Due to the way the Alberta Capital Financing Authority’s deadlines work, the town won’t be able to borrow money from it for the rec-centre until this June, Jason explained. This line of credit is meant to cover any bills that have to be paid before sponsorship or loan dollars arrive.

Jason proposed to take out a five-year loan for up to $11,737,688 this June to pay for the arena part of the rec-centre, explaining that council had previously said it wanted the arena paid off in five years. She hoped to get this loan down to about $7.7 million using sponsorships.

A second 15-year loan of up to $7.1 million (less than that if sponsors come through) would pay for the field house and would be borrowed around September, Jason said.

While the town planned to pay for the principal of these loans using federal gas tax and provincial Municipal Sustainability Initiative money, taxpayers will have to cover the interest, Jason explained. The town would pay an estimated 2.4 per cent interest on the first loan and about 3 per cent on the second.

Jason said the town would still be about $3.9 million below its self-imposed debt limit if it received no sponsorships and had to borrow all this money.

Mayor Barry Turner said in an interview that he was not surprised by this proposed borrowing, as council knew it would have to take on debt for the rec-centre. The town was looking for sponsors to reduce the amount it would have to borrow, and would soon create a sponsorship policy to outline naming rights and other sponsorship levels.

The line of credit motion is back for second reading this March 27. Council will hold separate votes on the arena and field-house loans later this year.