I envy people who buy a car new and enjoy it so much they continue ownership for decades all the while keeping their vehicle looking like new. Easily done if you don’t drive during winter.
0
Jun 27, 2018 12:07 AM By: Garry Melnyk 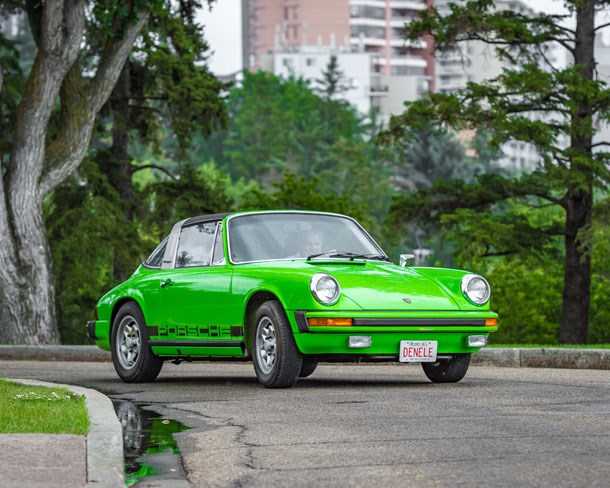 The 1974 Porsche has limited mileage, but every mile was driven with pleasure.

I envy people who buy a car new and enjoy it so much they continue ownership for decades all the while  keeping  their vehicle looking like new. Easily done if you don’t drive during winter.

Denele Somshor-Walsh of Edmonton had a decision to make many decades ago. A young educator and newly married to Roger, a career member in the RCMP, Denele had become a fan of small sports cars. She had owned a couple of Mustang convertibles while Roger had a 1970 Mustang and later a Corvette.  In 1972 Denele bought a Volkswagen Beetle as a daily driver but it wasn’t long before the Beetle didn’t seem like enough car to satisfy her passion for driving.

That’s when Denele started doing some research. She likes the colour green. So it’s no surprise a bright green coupe in the 1974 Porsche brochure got her attention right away. She and Roger agreed the 911 was her sports car of choice. She obtained a bank loan and soon after the couple went to a Volkswagen dealership to fill out the order form. (At that time Porsche did not have its own dealership network across Canada). A fan of top down motoring, Denele really wanted a convertible but such a model did not exist in Porsche's model lineup, so a 5-speed 911 Targa was deemed the best compromise. Denele also insisted on the bright green paint colour. For whatever reason this didn’t sit well with the female salesperson who tried to talk Denele into another colour. But undeterred, Lime Green was selected with standard black Leatherette trim and black twill seat inserts. Other options were carefully chosen including a front curb guard, not something normally seen on 911s of that era.

The Targa arrived in May 1974 missing emblems, the jack, radio, air pump and a pint of touch up paint. Roger believes those pieces disappeared after the car was unloaded in port at Halifax. The Frankfurt Blaupunkt AM/FM radio was originally ordered, but Denele took a basic AM radio to replace the stolen stereo.  Once all the other parts were replaced the Targa was delivered. The green 911 created quite a sensation at the Edmonton Volkswagen dealership as 911 Porsches were a rare sight on Canadian roads back then.

From that day on, Denele and Roger enjoyed the Targa as a special/weekend driver.  As a school principal, Denele rewarded outstanding students at the end of the school year with a ride in the Targa to the lunch spot of their choice. There were also many highway trips with Roger in Western Canada and two solo road trips; into Washington State and Yellowstone National Park in Wyoming. At one point during a two-year time period Denele and Roger lived apart so she could work toward her PhD in Education. Trips to the town where Roger was posted were done regularly and the 2.7 litre engine eager to run full out. As Denele told me with gleam in her eye, “I would have the speedometer up to as high as it would go.”

By the mid-‘90s the couple was getting busy with many interests including horses, travel and drag racing. This left the Targa spending less time on the road. From 2003 onward and now only 40,787 miles on the odometer, the Targa sat covered in one side of the garage.

“They were all pleasure miles,” said Denele in a reflective mood.

But life was busy and it wouldn’t be until 2015 when the couple, after talking annually about getting the Targa running, finally decided to do just that.

The Walsh’s approached Eurasia Automotive of Edmonton on a plan to get the 911 running again. Service manager Ralph Buchsdrucker was excited about his team bringing an old Porsche back to life. The car attracted the attention of the shop’s younger technicians and more than a few customers who were around.

Once the go ahead was given it didn’t take long for Ron to find out the worst and most expensive problem – a rusted gas tank. Fuel hoses also had to be replaced along with the fuel sending unit and fuel filter. The fuel distributor and fuel pump were both cleaned of varnish from the old fuel. A new fuel tank was purchased and shipped from Germany. All fluids were flushed and a tune-up was done prior to startup. When the car was turned over the little Targa fired up without a problem.

After all the service work was completed, Ralph himself got behind the wheel and gave it a passing mark saying “It’s a survivor, well-preserved and drove wonderfully, other than the clutch being grabby.”  Denele is just as delighted to have her car on the road again. The Targa has been featured in a British magazine and to see it in person was a pleasure for the eyes knowing it’s all original.