Springtime brought not only daffodils, greener grass and warmer temperatures but Ford dealers suddenly had a crop of 2015 Mustangs arrive in showrooms.
0
May 30, 2015 12:00 AM By: Garry Melnyk 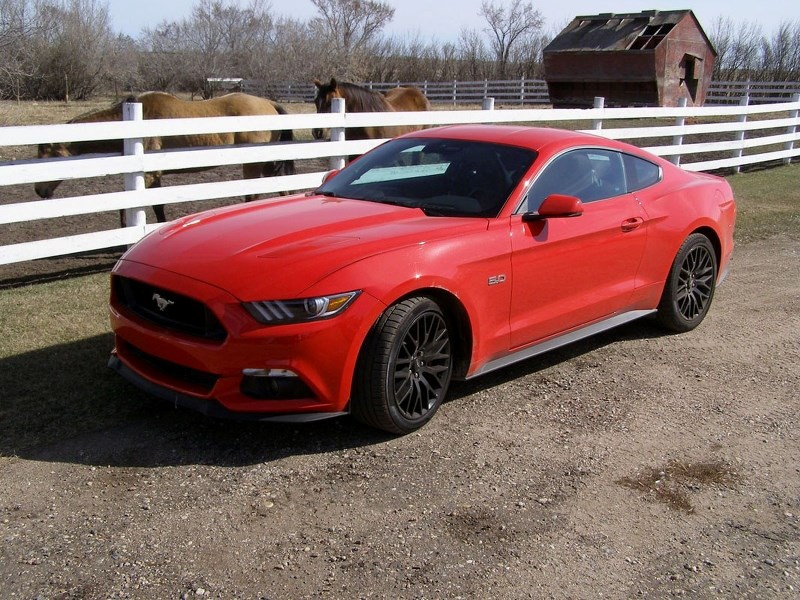 The 2015 Mustang GT Premium is a true muscle car.

Springtime brought not only daffodils, greener grass and warmer temperatures but Ford dealers suddenly had a crop of 2015 Mustangs arrive in showrooms. So not long ago I was handed the keys to a GT Premium model loaded with options and powered by a 5.0-litre V8 backed by a six-speed manual gearbox. A true muscle car with all the options to enjoy the drive.

As 2014 was the 50th anniversary of this car, this latest generation of Mustang had to be done just right by Ford to appease die-hard fans like me while expanding on a larger scale in the European market. Two thumbs up for what designers and engineers have done. However, this Mustang still weighs more than the previous model. That has been the biggest issue raised by Mustang faithful although with 435 horsepower and 400 lb. ft. of torque from the V8 the amount of engine compensates for the extra mass. Of course Mustangs equipped with the other optional engines will weigh a little less.

Most importantly the new car is more refined and now has independent rear suspension for improved handling and ride. I put on many kilometres with my test car going to Provost and back one day, then hitting the highway to Sundre and returning home the next. So I can say with certainty the V8-powered GT is a fine highway car. I deliberately drove like a normal person to achieve the best fuel consumption possible during those two days and got 9.2L/100km as my best. Around town with an occasional stomp on the go pedal my worst fuel consumption was 16.4L/100km. Certainly someone concerned about saving pennies at the pump doesn’t buy the V8 model knowing it’s going to be thirsty once in a while. Mustang buyers can also choose a turbocharged four-cylinder (EcoBoost) or the entry level V6.

The six-speed manual gearbox is delightful, short, precise throws help get the power to the rear wheels. In most situations on two-lane highways, I found gearing down into fifth wasn’t necessary to pass another vehicle. But it sure made the Mustang sound nasty.

Handling is much better than the fifth generation car, something I felt in the seat of my pants pushing through a few tight turns on my road trips. Let there be no doubt the new Mustang GT is a true driver’s car, very capable against its competitors – Camaro SS, Challenger R/T, Hyundai Genesis Coupe 3.8, Nissan 370 Coupe and dare I say BMW M3?

Electric steering is standard with Comfort, Normal and Sport settings. Simply make your choice and toggle through them via a button at the base of the centre stack. There is also a toggle switch next to it to select drive modes – Normal, Sport, Track and Snow/Wet.

The starting price for this great car is $25,349 for the V6 model. But of course you’re not going to be paying anywhere near that once the GST is added and maybe a few options. I looked over a bare-bones EcoBoost four-cylinder model sitting on Waterloo Ford’s lot and it priced out at $30,000 and change. There weren’t many options on that car. A convertible Mustang is also available; its base price is around $30,000.

If you have the income and want the growl of a V8 and crave the performance that goes with it, well the sky’s the limit. My GT Premium started at $42,499. The GT Performance package was added on for an additional $3,700 and includes upgraded tires, black painted wheels, a more performance oriented rear axle ratio, firmer springs and larger sway bar.

Leather Recaro seats were an additional $1,800 but worth the cost in how they keep you in place during spirited driving and keep your butt happy on a long drive. Additional options; some of which I wouldn’t bother getting, pushed the price tag to almost $54,000 before freight was added in. Again look at other cars in this performance market and a loaded GT is right in there with the rest of them.

I’m impressed with the exterior design; it’s more tastefully done than the previous retro-themed Mustang. Yet still retains those traditional Mustang cues like the triple bar rear taillights. The fastback has a sleeker profile, due in part to a more steeply raked windshield and rear window. The car also has a lower, wider stance with reduced roof height and wider fenders.

Inside, designers listened to people about moving the cup holders slightly and keeping the traditional two-pod flavour of the instrument panel.

No not a practical car, but an expensive toy that you can enjoy no matter what the season. Winter included, just put on the best snow tires and it will get you through snow covered streets.

So as a long-time Mustang enthusiast and owner of an ’03 model, I still feel the Mustang can come down in size, as the new 2016 Camaro has gone on a diet losing 200 lbs. Downsizing a little won’t hurt interior room much and cargo room isn’t an issue as you have plenty for two people and the added bonus of a folding rear seat back. Hopefully this summer I can drive the V6 or four-cylinder version of the Mustang as those are the cars most people will be buying.