By now you may know the 2017 F-350 Super Duty won the Truck of the Year award. Motor Trend magazine began presenting its Car of the Year award in 1949. The effort and attention to detail in determining a worthy recipient is exhaustive.
0
Feb 7, 2017 11:00 PM By: Garry Melnyk 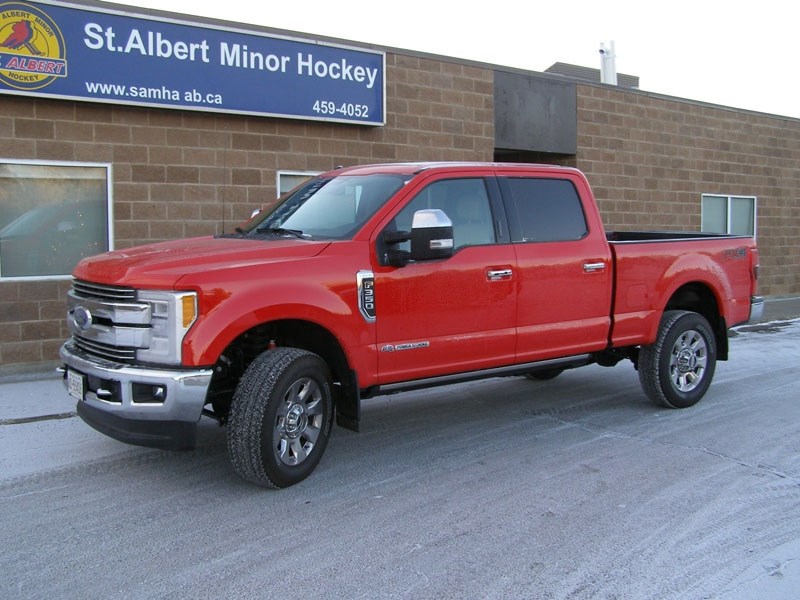 By now you may know the 2017 F-350 Super Duty won the Truck of the Year award. Motor Trend magazine began presenting its Car of the Year award in 1949. The effort and attention to detail in determining a worthy recipient is exhaustive. In our modern age Motor Trend not long ago created two more categories to better reflect what’s hot in the marketplace: SUVs and trucks.

Heavy-duty pickup trucks are serious business especially in Alberta. These pickups need to be capable and usability is king. Ford’s Super Duty trucks continue to be leaders in their class for 2017 in several areas. The new generation of Super Duty is evolutionary, not revolutionary so at first glance it all looks familiar inside and out. But important changes have been made even though the overall exterior design looks much like the previous truck. One has to accept that Ford is merely being cautious in not radically changing what has been working very well for many decades. Styling for example tells the world it’s a Ford pickup with a look that accentuates strength and dependability.

Engineering is key in developing a heavy duty truck capable of coping with conditions anywhere be it the oil patch, mine, farm or construction site. Towing capacity is extremely important and the new Super Duty is claimed to have a class-leading 32,500-lb. towing capacity and the 7,630-lb. mass payload capacity. Also impressive is the ability to extend blind-spot detection to cover a trailer which adds an important layer of safety, as does the ability to monitor the tire pressures on a trailer and the trailer lights on the instrument panel. The 360-degree camera greatly aids manoeuvring in close quarters in addition to front and rear-looking cameras. A tailgate-mounted backup camera makes connecting a trailer a breeze.

Another smart feature is the inclusion of four 25-amp and two 40-amp auxiliary switches for connection to power takeoffs or other equipment. Also available is a 400-watt power inverter and two available 110-volt power outlets for charging tools, computers and other gear.

My test F-350 Crew Cab was a Lariat trimmed 4X4 with the optional 6.7 Litre Power Stroke Diesel engine. Cold temperatures didn’t affect start-up when the truck sat for a few days at Edmonton International Airport. After a couple of minutes of idling as I swept off a little snow, the truck showed its colours pulling strong and steady as we merged onto the QEII and headed for home. The transmission clicked off quick upshifts without surging and got up to highway speed a lot quicker than you might expect for a truck of this size. The ride can be a bit jarring on some pavement and over expansion joints but shouldn’t that be expected with a truck carrying a beefy suspension? The suspension is part of the reason that Ford Super Duty trucks have gained a reputation for class-leading towing and handling.

Inside, the F-350 interior looks much the same as the previous generation truck offering the same clear instrumentation and easy to use controls including some large knobs. You need large knobs when you’re wearing work gloves, right? My test truck in Race Red with a Camel leather interior started at $66,249 in Lariat trim. From there it was built up with a long list of options, some almost laughable for a truck that’s supposed to be someone’s workhorse.

A few of the high dollar items included; a Chrome Package, skid plate, shiny 20” aluminum wheels, a sprayed bed liner and the Lariat “Ultimate Package” ($5,675.00) consisting of twin-panel moon roof, adaptive steering, lane-keeping alert, remote start and tailgate step. There were more options not as noteworthy but there to add enjoyment to the driving experience while pumping up the sticker price. The final tab for this F-350 Crew Cab was $96,163 including shipping.

Ford does extensive research among its customers resulting in the F-350 Super Duty offering innovative and class leading features. Clearly the competition will have some catching up to do.