2017Acura MDX is a good cross over vehicle

If you feel the need to spend more than $50,000 on a cross-over utility vehicle the Acura MDX would be one of the nicer looking ones for less than fifty-five big ones. The engine is strong, smooth and quite good on fuel.
0
Apr 22, 2017 12:00 AM By: Garry Melnyk 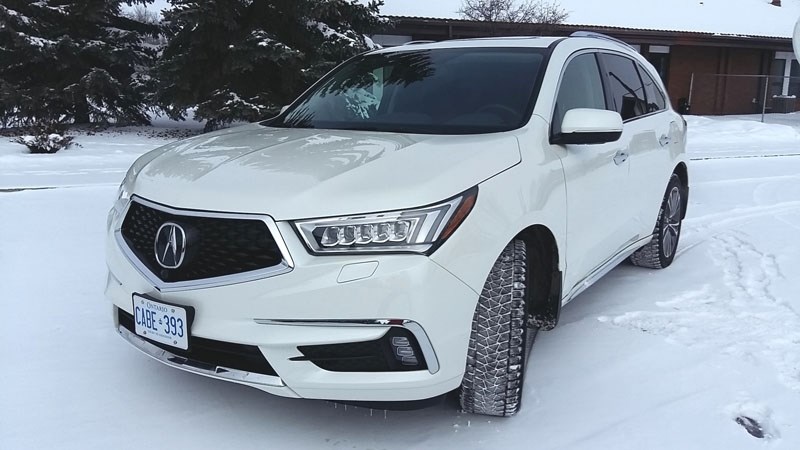 FUEL EFFICIENT – The 2017 Acura MDX cross over vehicle has more than enough power to propel it quickly to highway speeds. The V6 engine has decent fuel economy.

If you feel the need to spend more than $50,000 on a cross-over utility vehicle the Acura MDX would be one of the nicer looking ones for less than fifty-five big ones.

The engine is strong, smooth and quite good on fuel. The transmission clicks off upshifts like a spoon through pudding, although my tester’s 9-speed wasn’t eager to upshift from first to second when the transmission was still not fully warmed up. Not sure it’s a trait with the MDX or just a minor thing with the tranny I had.

The brakes are strong and more than able to bring the MDX to a quick stop when needed. On the road, powertrain noise is muted by good sound deadening and the fact the 3.5 litre V6 is humming along under 2,000 r.p.m. at 110 km per hour. The V6 rated at 290 horsepower has more than enough ponies to propel the MDX up to highway speed. You never feel like there is not enough engine. It should be more than capable of getting you up a mountain fully loaded with passengers and their gear. Fuel consumption is good given the size of the MDX. Around town I averaged 11.1 L/100 km. My highway rating of 9.0L/100 km matched what Acura rated the MDX.

All-Wheel-Drive is standard and gives you the grip you need no matter the road conditions. Acura says their AWD system is designed to sense driving conditions and react accordingly by sending up to 70 per cent of the torque to the rear wheels. At the rear the system is capable of mechanically splitting that torque by sending up to 100 per cent of it to the rear wheel with the most traction.

What sets the 2017 MDX apart from competitors is the execution of the exterior and interior design. I could name a number of CUVs and SUVs at $50,000 plus that are rather dull looking on the outside and ho-hum on the inside. If you appreciate tasteful design without the silly styling gimmicks some manufacturers slap on their vehicles, you might take a close look at the MDX. Now restyled with bejeweled LED headlights and a revised front grill, the new look sets off a nice front-end making this year’s MDX much nicer looking. The stylist’s careful use of character lines and chrome trim really make the MDX look good from any angle.

Inside, the interior is inviting with supportive and comfortable seats both of which on my Elite were 10-way power adjustable. For the most part I like the instrument panel layout. Only two things annoyed me; the function of the cruise control (a little too complicated) and a NAV screen where there are too many layers to search in order to select a feature. The steering wheel is not too thick so most people will not get sore fingers after an hour of highway driving. The use of real wood trim and tasteful bits of polished aluminum trim add a touch of class along with white contrast stitching on the seats. Large windows, big side mirrors and a backup camera all work together to let you easily see in every direction. Seats are heated and cooled. All MDX models seat seven if the third seat is used. Fold that seat down and you have 1,239 litres of cargo capacity.

My nearly top-of-the-line Elite model had all the gadgetry you expect now on an expensive vehicle including surround sound and a high-end DVD entertainment system for rear seat passengers.

The starting price for a base MDX is $53,690, which is great but you are limited in exterior colours and some features. Go for the next step up, the Navi and there are more colours and features at a still very reasonable $57,190. My Elite tester at $65,790 is almost the most expensive model but comes with everything most people need at this price point.