In a world full of SUVs that all look like potatoes or jellybeans, The Lexus NX 300 certainly stands out from the crowd. The controversial spindle grille sets the tone and you either like it or despise it.
0
Apr 18, 2018 12:00 AM By: Garry Melnyk 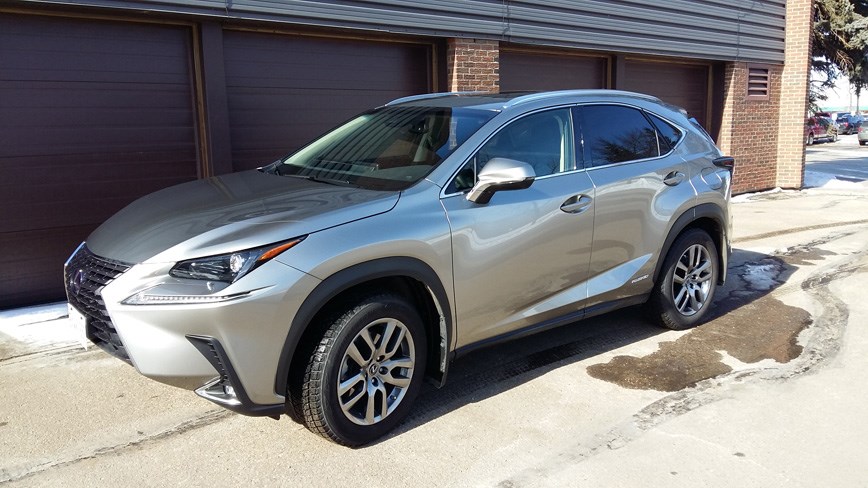 In a world full of SUVs that all look like potatoes or jellybeans, The Lexus NX 300 certainly stands out from the crowd. The controversial spindle grille sets the tone and you either like it or despise it. Still, this popular Crossover is a hit with buyers. The NX 300 is the second best-selling Lexus brand in Canada. So Lexus has been careful in its refresh on the 2018 model.

As a result, styling changes are minimal on the front for the NX 300 and NX 300h, the wide, gaping grille now extends lower making the Lexus “spindle” more prominent. Larger air intakes enhance engine and brake cooling and all models get redesigned LED headlights. At the rear stylists have redone the tail lights and other details.

Inside, soft leather and tasteful detailing makes for a pleasant experience whether you’re driver or passenger. Steering wheel-mounted paddle shifters are now standard, as is a 10.3-inch infotainment screen. All trim levels get a new, larger console-mounted touchpad that has been refined for improved interface. Heated and cooled seats are standard along with a heated steering wheel. Heated rear seats are now available for the first time. Instrumentation and controls are well thought out.

Strangely Lexus has not placed Apple CarPlay or Android Auto for Smartphone connectivity into this model. Instead, Lexus has designed in its own Enform operating system which was introduced on another Lexus model. This includes a series of apps for providing info on traffic, sports, weather and stock markets, plus Slacker Radio and a Yelp search engine. Also included in the system is Scout GPS, which uses your cellphone’s GPS for navigation. The system works, with the only frustration I discovered was the inability to connect my Android cellphone. Really annoying.

There are a few new standard driver assists, including dynamic cruise control, lane-departure warning with lane-keep assist, automatic high beams, and collision mitigation with pedestrian alert. A few new available assists include rear traffic alert with automatic braking, and a 360-degree camera monitor. The dynamic cruise control is a step up from regular cruise, as it maintains a preset distance behind other vehicles and slows the NX to a stop in traffic, but it won’t accelerate back up to speed on its own and you must resume manually.

When you’re on the go the passenger cabin is hushed, the seats most comfortable, the stereo system really good. Large side mirrors make up for the smallish side windows. A nice touch though for passengers and driver would be some natural wood trim and a little less plastic to enhance the interior experience.

Engineers have revised suspension settings but the ride when encountering potholes and pavement cracks is a little choppier in the 300h than I had expected.

The NX 300h hybrid is powered by a 2.5-litre Atkinson cycle four-cylinder engine, which combined with two electric motors to produces 194 horsepower. The engine propels the front wheels via a continuously variable transmission, while the electric motors power the rear wheels. The hybrid combo isn’t a powerhouse so plan to take a little more time to complete a pass. At least you get decent fuel economy; my NX 300h in mostly city driving averaged 9.0L/100 kilometres (31.5 mpg). This is good for a Crossover of this size. But, there are less expensive hybrid alternatives including the Toyota RAV4.

The NX 300h has a base price of $55,000. The RAV will be around $20,000 less. The starting price for a base NX is $44,050. The NX is designed to attract younger drivers, and it certainly does that if they have the income to purchase, but I can see an older demographic in the hybrid. Cargo capacity in the back is limited because of batteries taking up space behind the rear seat. Not what you want if there is Mom, Dad, two kids and all the stuff that goes with a family.