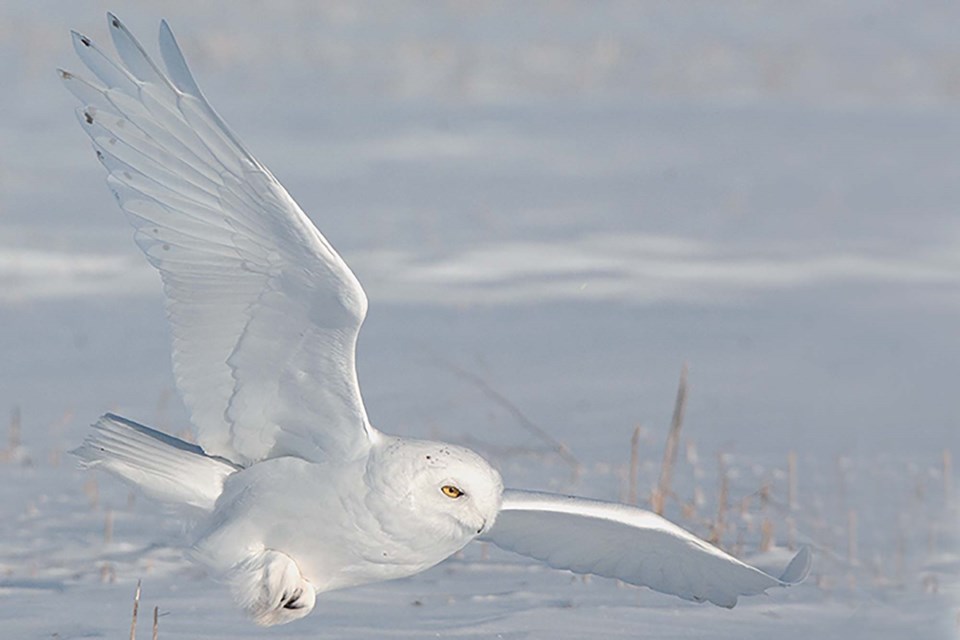 ICONIC COUNT BIRD – St. Albert's Christmas Bird Count returns for its 30th anniversary this Dec. 26. Many counters will have their eyes open for snowy owls such as this one. GORDON COURT/Alberta Fish and Wildlife

St. Albert ornithologists are prepping their lists and binoculars this month as they gear up for St. Albert’s 30th annual Christmas bird count.

Birds Canada put out a call last month for volunteers to participate in the 2020 St. Albert Christmas Bird Count.

The annual event typically sees about 100 people fan out across a 24-kilometre-wide circle centred on the old St. Albert Airport in late December to count every bird they can in 24 hours. Data from the count is sent to Birds Canada and other agencies to track trends in bird populations.

Running this year’s count is St. Albert birder Dave Cleary, who used to own Wild Birds Unlimited in Edmonton. Cleary said he knew former count co-ordinator Alan Hingston and agreed to take over the event’s organization this year after it nearly folded in 2019.

Cleary said this year’s count would be on Dec. 26 (Boxing Day). Counters could once again participate as either stationary feeder-watchers or mobile bush-beaters, the latter of which would patrol a set zone in search of avian life.

The count might change radically, or be cancelled altogether, depending on what rules are in place on Dec. 26 to control the COVID-19 pandemic, Cleary added.

As of Dec. 2, the province had banned indoor social gatherings and capped outdoor gatherings at 10 people, with those outdoors expected to remain physically distanced (at least two metres) from each other. That means no bird-watching parties amongst feeder-watchers, and no crowding around the camera or binoculars by bush-beaters. Cleary also recommended bush-beaters take separate cars instead of carpooling while on patrol.

Cleary said this year’s participants should email count data manager James Fox at [email protected] to sign up for the count.

Speaking to the Gazette in 2010, Demulder said the count had its roots in the just-formed Big Lake Environment Support Society. Area birders wanted to know more about trends in bird populations, so he set up the count to start keeping track.

“I had to do a lot of arm-twisting,” Demulder said, but 99 people showed up.

This was in the early days of the internet, so everyone relied on pen and paper to record their observations, said Hingston, who participated in that first count. Afterward, you would either phone in or hand-deliver your results to Demulder, who would meticulously tally everything up on a big sheet of ledger paper.

Count records show residents identified 4,028 birds from 40 species in that first count, including the only three lesser scaups spotted thus far in the count’s history. Other rarities included a record two American coots (last spotted in 1997) and a northern hawk owl (last spotted in 1993).

Hingston said Demulder stepped down as count co-ordinator after the 2002 count as he wasn't very tech-savvy and Bird Studies Canada had started requiring counters to submit their records electronically. Birder David Nadeau stepped up to take his place in 2003 and ran the count until his sudden death in November 2007, after which Hingston took over.

Hingston stayed on as count co-ordinator until personal circumstances forced him to pull back in late December 2019. The count was initially cancelled that year, as Hingston could not find a replacement organizer, but was revived late that month after Birds Canada drafted Edmontonian Elene Haave Audet to take over the event.

Cleary said count organizers had not planned any special celebrations for this year’s 30th annual count due to the pandemic.

“We’ll be lucky to get the whole thing off the ground.”

Cleary said he had seen an uptick in interest in birding this year, likely because it is one of the few activities people can do while in quarantine. Bird-watching is a great way to connect with nature and a fun family activity, he added. He predicted a smaller-than-average turnout for this year’s count due to the pandemic.

Hingston advised novice counters to pack binoculars, a smartphone bird guide and warm clothes before heading out to count. Bush-beaters should move quietly to avoid spooking birds and remember to stop, look and listen every few minutes to spot those more elusive species.