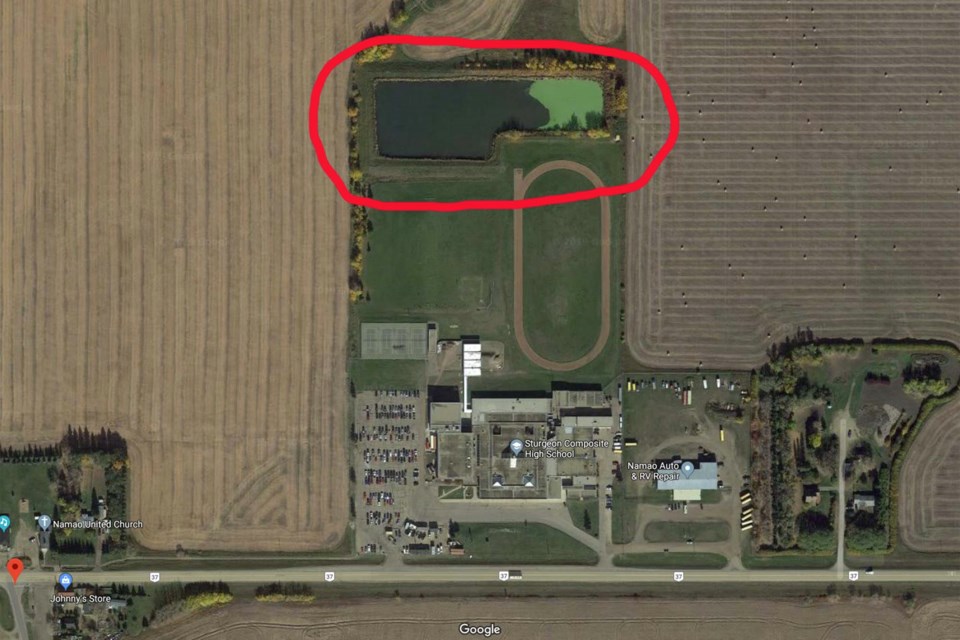 DISPUTED POND – Sturgeon Public School Division is set to go to court this December over a $32-million lawsuit filed by Ardmore Properties Inc. Ardmore alleges that wastewater from the sewage lagoon (circled here) near Sturgeon Composite High has contaminated its lands, which are next to the pond.

Sturgeon Public School Division and a county land developer will face off in court this December in a case that could cost the school board $32 million in damages.

Sturgeon Public School officials confirmed Wednesday they are embroiled in a $32-million lawsuit filed by Ardmore Properties Inc. that has so far cost them $500,000 in legal fees.

Board chair Terry Jewell said the suit was first filed in June 2016 and involved the sewage lagoon that services Sturgeon Composite High and Namao School, and the board had budgeted another $350,000 this year in case it went to trial. He would not comment further on the matter as it is before the courts.

Ardmore Properties director Rick Hinteregger said his company bought the roughly 130 acres north of Hwy. 37, east of Hwy. 28 and north of Sturgeon Composite back in 2009 and hopes to develop it. The lagoon is next to these lands and has been there since the 1970s.

In its statement of claim (which has yet to be tested in court), Ardmore alleges this lagoon regularly discharges and leaks wastewater effluent onto its lands, contaminating it, and stated the province and Sturgeon Public had received numerous complaints over the years about such leaks. Ardmore alleges a groundwater study it commissioned showed the lagoon was leaking and causing contamination.

Ardmore alleges Sturgeon Public and the province were negligent in allowing these leaks to occur and had breached environmental law. The company seeks $32 million in damages due to lost profit, a permanent injunction to stop the board from operating the lagoon, an order for the board to remediate the Ardmore lands and other costs.

In their statements of defence (which also have yet to be tested in court), Sturgeon Public denied all allegations made by Ardmore, with it and the province specifically denying they acted negligently or that the Ardmore lands were contaminated.

The province alleges one of the four test wells involved in the groundwater study commissioned by Ardmore found evidence of leakage, but that the study called for additional monitoring to confirm background water chemistry. Based on additional tests in 2013, the province concluded the tests did not definitively show if the lagoon was leaking or not.

The board alleges if Ardmore suffered damages in this case, any damages it incurred were due to its lack of due diligence for not recognizing the potential implications of the lagoon on future development back when it bought their land. The board called the damages sought “highly speculative and grossly exaggerated” and said there was no basis for Ardmore’s call to have them stop running the lagoon.

The province and the board both want Ardmore’s case dismissed.

The suit is scheduled to be heard at Edmonton’s Court of Queen’s Bench this Dec. 19.