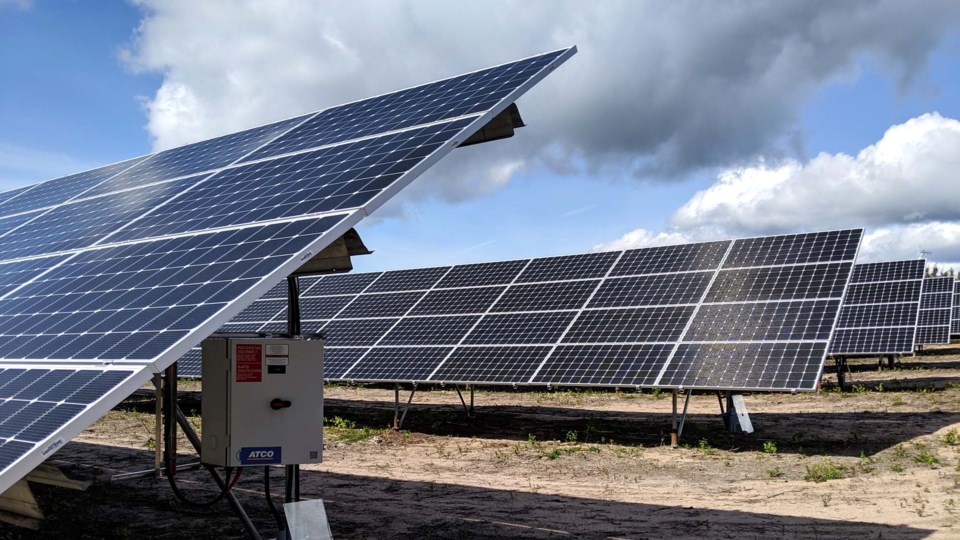 COMING TO ST. ALBERT? — St. Albert's community growth and infrastructure standing committee recommended this week that city council spend $200,000 to study a $33 million solar farm on the Badger Lands. The farm, which would likely be similar to the one in Fort Chipewyan shown here, was projected to make the city a net $29 million in 25 years. ATCO/Photo

A city administrator has proposed St. Albert build a 15-acre solar farm on the Badger Lands that could eventually make the city $29 million.

Members of the St. Albert community growth and infrastructure standing committee voted unanimously July 13 to recommend that city council spend $200,000 on design work for a proposed $33 million solar farm on the Badger Lands – the 80-acre site owned by the city north of Villeneuve Road.

City utilities and environment director Kate Polkovsky spoke on the project during city committee meetings on July 8 and July 13.

Money from the sun

Polkovsky said she looked into solar power after council directed her to find ways to make the city money.

She noted the cost of solar panels had fallen some 85 per cent in the last decade, and that Alberta has excellent solar resources. Solar farms allowed communities to generate electricity and carbon credits, both of which can be sold to make money.

Polkovsky crunched the numbers for a $33 million, 15-acre, 15-megawatt solar farm, one that could be built in three chunks over 15 years, each phase creating five megawatts of power. It would be paid for through a 25-year loan.

She found the farm would make more than enough money each year to cover its annual loan payments, paying for itself in 25 years and netting the city a $29 million profit, about $200,000 of which would be made in the first year.

“We haven’t built in any grants,” Polkovsky noted, and they haven’t counted additional cash they could make by selling green power to a third party.

Polkovsky said the farm would likely last about 30 years – panels in California have been known to last 40 – after which about 96 per cent of the materials in the solar panels could be recycled. The farm would cost about $30,000 a year to run, most of which would go towards mowing grass and clearing snow from the access road – clearing snow from the panels won't be needed as they’ll be on an angle and get hot enough to melt most of it.

Polkovsky said the farm would offset some 3,500 tonnes of heat-trapping carbon emissions a year – the equivalent produced to power 1,481 American homes a year, the U.S. EPA estimates.

Polkovsky proposed that the farm go on the northern 15 acres of the Badger Lands.

That land was contaminated with salt from its use as a snow dump and would require expensive cleanup before it could be sold. It was also close to a substation, which would reduce transmission costs. She noted the city could always remove the solar farm in 30 years if it wanted to sell the land.

Solar farms have been proposed and are under construction in many Alberta communities, including Bon Accord, Edmonton, Calgary, and Vulcan County. Polkovsky specifically cited the $7.76 million solar farm in Fort Chipewyan owned by Three Nations Energy as an example.

In an interview, Three Nations Energy president Calvin Waquan said his group’s solar farm would produce about a quarter of Fort Chipewyan’s electricity and prevent about 2,145 tonnes of greenhouse gas emissions a year once completed this winter. The farm has already created local jobs and gotten residents interested in rooftop solar and energy efficiency.

“They see a future through employment (and) they see a future in balance with the Creator. That’s what’s really exciting for me, is making a lifestyle change within our youth and in our people.”

Besides its environmental benefits, Mayor Cathy Heron said the St. Albert farm could create a hub for green industry in St. Albert and reduce the tax burden on residents. While the city would have to take on debt to build it, revenue from the solar farm should completely cover that debt.

“Probably now more than ever we’re going to be looking to offset taxes because of COVID-19, and this is a good opportunity to do that,” Heron said.

Polkovsky said the $200,000 would let her do a feasibility study for the solar farm at several sites in town including the Badger site, one that would examine safety, grid capacity, and environmental impact.

The community growth and infrastructure standing committee also recommended that council have administration report on the study's results by the second quarter next year, prepare a borrowing bylaw in 2021 to fund the solar farm's construction, and dedicate the back third of the Badger Lands to the development of a solar power industry in St. Albert.

These recommendations will be considered at a future city council meeting.