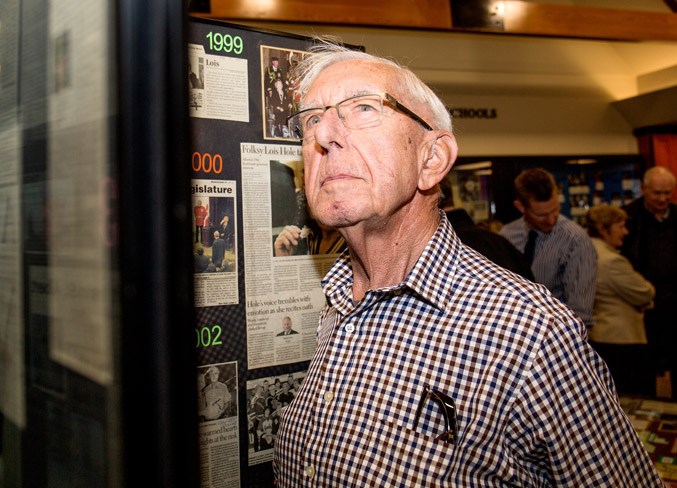 LOOKING BACK – Dave Geddes, who was one of the first staff members at Paul Kane back when it was a junior high, looks through old newspaper clippings about the public school district on Thursday. The clippings are part of a new exhibit celebrating the St. Albert Public School district’s 60 years of history.

Remember the Great Condom Debate of 1990?

Joe Demko does. He was associate superintendent at the time of what was then the St. Albert Protestant District, and can remember seeing trustee Lois Hole walk through a mob of 150 angry, sign-waving parents and students at the old district office that March en route to the vote on whether or not to put condom machines in the district’s two high schools.

More important than the actual vote (which passed) were the conversations about sex and sexuality it prompted among St. Albert families, Demko said. It also prompted the board to make sure its next district office had multiple entrances so members could avoid angry mobs in the future, he joked.

“I was really proud of our board,” said Demko, speaking at that new St. Albert Public district office Thursday.

Demko was one of about 56 St. Albert Public alumni at the district office (60 Sir Winston Churchill Ave.) on Thursday to celebrate a new exhibit on 60 years of Protestant education in St. Albert.

The exhibit is part of an ongoing series organized by the Historical Foundation of School District 6, said acting chair Pat Babiuk. While previous exhibits have profiled schools, the foundation decided to do the whole district this year in recognition of the district’s 60th anniversary.

The exhibit features articles and photos from the district’s past, including photos of some of the 255 teachers who have served 25 years or more with the board during its history.

That’s a testament to the board’s excellent parents and leadership, Babiuk said.

“Once they’re in the district, they find it’s so great they don’t want to leave.”

The St. Albert Protestant board came out of a meeting called by Dr. William Cuts in February 1958, Babiuk said. According to Black Robe’s Vision, Cuts was concerned that St. Albert’s demographic trends meant that Protestants would soon be the majority, making them responsible for the city’s schools and their debts. While some voters, including Lorne Akins, feared such a move would prove divisive, the group voted to form a separate school district, which led to the creation of Protestant Separate School District No. 6 on April 1, 1958.

The board’s first school, Sir Alexander Mackenzie, was supposed to open that fall but was delayed due to squabbles between the architect and the province, Babiuk said. The board’s first 98 students spent the fall of 1958 taking classes in the basement of the St. Albert United Church.

The exhibit delves into many of the big issues and events in the district’s history, including bullying, bus routes and teachers’ pay.

One hot topic in the early years was the district dress code. Under it, Babiuk said boys were required to wear dress pants and collared shirts with no more than the top button undone, while girls had to wear skirts of a minimum length. Principals were empowered to measure skirt lengths from the floor up in case of a dispute. When a seven-year-old from SAM was suspended for wearing blue jeans and a T-shirt in 1961, a judge upheld the suspension, saying that “blue jeans and T-shirts are the uniform of the hoodlum,” the exhibit showed.

Looking back on the district’s 60 years, Demko (who started as a teacher with it in 1968) said that the one theme that stands out is the way its people embraced students.

“The members of our school community have always put the needs of our students first, and this has been a constant for over 60 years of existence. I believe this has been our strength, and will continue to be our focus for the next 60 years.”

The free exhibit is open to the public for the rest of this school year.