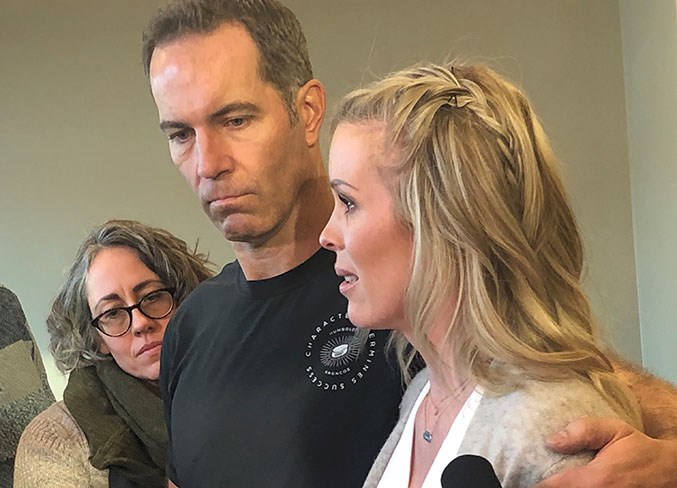 Chris Joseph, centre, and Andrea Joseph, the parents of Humboldt Broncos player Jaxon Joseph, address a court in January at the sentencing hearing for Jaskirat Singh Sidhu. Chris says he is disappointed with the Alberta government's decision to extend the deadline for drivers to comply with new training.

Families of the Humboldt Broncos players who died in a tragic bus crash in 2018 are urging the Alberta government to keep strict road regulations.

Transportation Minister Ric McIvor released a statement at the beginning of October that the UCP government had extended the deadline for drivers to comply with the new Mandatory Entry Level Training (MELT) program, which was introduced by the former NDP government

Chris Joseph, who lost his son Jaxon in the crash, said he is not happy with the decision.

“We have been keeping up with everything that's been going on and we are extremely disappointed that the government has decided to take a huge step backwards,” Joseph said.

The decision allows hundreds of new truck and bus drivers to delay going through Alberta's new Class 1 and 2 driver training program. McIver's statement added the government plans to work with farmers and school bus drivers to "build a strong driver training system that works for our key industries while ensuring public safety."

The new training program was brought in by the NDP last year as an effort to strengthen driving regulations following the Humboldt Broncos bus crash. Joseph said the MELT program that was brought in to Saskatchewan, Manitoba and Alberta was a great first step in keeping up with regulations in Ontario.

The UCP government said it is relaxing the rules for bus drivers and farmers because they are travelling much shorter distances than long-haul truckers.

But Joseph and other Broncos families believe strict rules help prevent other tragedies in the future.

“It's important because we don't want to see other families go through what we have been going through. Our life the last year and a half, it's changed forever, it's been hell. I wouldn't want any family to go through that,” Joseph said.

Joseph said the families feel a strong need to advocate because many other people lose loved ones on the roads but don’t have the platform the Broncos families do.

“In a way, we feel like we're fighting for them. We're also fighting for us. But we're trying to create change as best we can."

Shauna Nordstrom, mother of Logan Hunter, who died in the Broncos bus crash, said the move is unsettling.

“It's just unsettling to know that there would be over 1,000 drivers that didn't get any training,” Nordstrom said.

Nordstrom said she considers truck drivers to be professionals and believes they need education and accountability.

Nordstrom noted accidents can happen anywhere on the roadway, not just while travelling long distances, and feels like it is still not safe to have loosened regulation for bus drivers and agricultural drivers.

Both families want to know what the barriers are to continuing with strict training regulations.

The families say this isn’t a partisan issue and everybody wants safer roads for their loved ones.

They say if the problem is financial, it's worth spending the money in the interest of safety.

“If it comes down to money, I can say wholeheartedly from a family that lost a loved one, I would give everything I own and I would go into debt over and over again to have my son back,” Joseph said.

The families suggest offering the drivers government subsidies or grants to help pay for the training if it costs too much.

McIver said the province made its decision in order to address shortages of driver examiners, which he said was created by the NDP’s decision to end privatized road testing. McIver said school bus drivers and the agriculture industry are areas that require more drivers.

Both families say while they want the more strict provincial rules put back in place, in the end they really want to see driver training regulated by the federal government and not done through piecemeal provincial regulations across the country.

Air, rail and marine are all run by Transport Canada but roadways are left up to provinces to manage.

“Why it's not a national standard is beyond me,” Joseph said.

The families say they will keep fighting the new rules and keep advocating to get more strict rules in place for the safety of everyone driving on Canada’s roads.

“When I first heard about this, my emotions started with disappointment, then to anger, now I feel the fight within me to never stop for my son,” Nordstrom said.