A look at the west option for rec lands 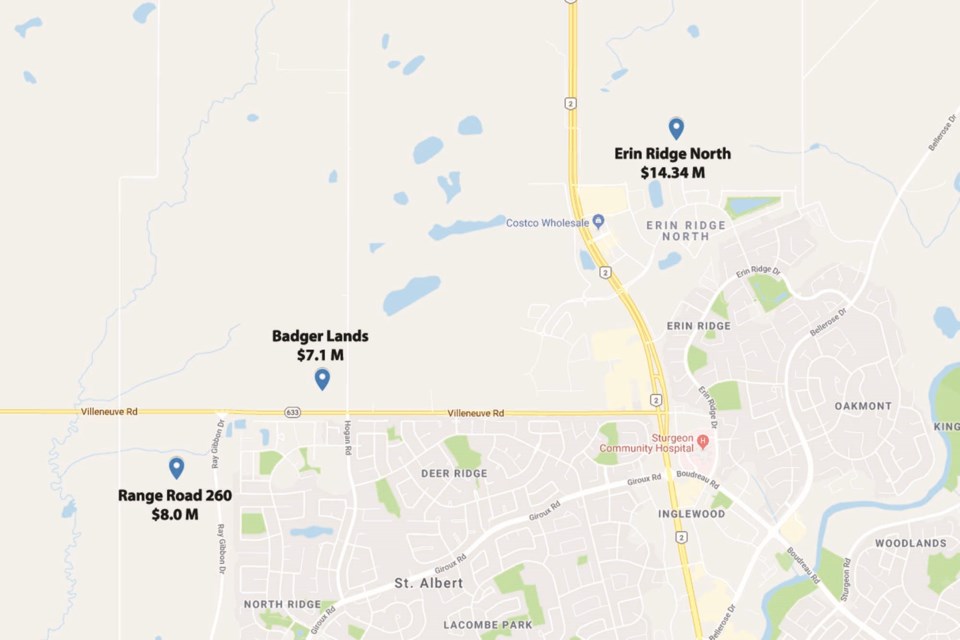 The city is considering three options for a future amenity.

There is a new kid in town when it comes to land options for a new recreation facility in St. Albert.

In September, Rohit Land Development was publicly unveiled as one of the companies offering land to the city for a new recreation facility. St. Albert is currently weighing the pros and cons of three land options, after the land options and their associated projected servicing costs were unveiled during city council’s Sept. 23 meeting.

Two of the options are privately owned and being offered to the city – one from Rohit and one from Landrex – and St. Albert already owns the third land parcel in the Badger Lands area.

Rohit has offered 59 acres to the city for a recreation facility west of Ray Gibbon Drive and south of Villeneuve Road.

“This particular piece of land, it’s had some hair on it,” Dauk said. “It basically had former landfill on it and previous parties working on the development were just not putting the time and effort into the work that it takes to monitor a landfill and do a proper closure on it.”

Over the past year, Rohit has been doing the necessary work and studies on the landfill – which comprises 29 acres of the 59 parcel – to demonstrate it is “not an issue.”

“I’m certainly not trying to give away a problem, and that’s open for people to see as it goes through the city, because the city would never take a liability,” Dauk said. The other 30 acres of land is fully developable.

Tests have included monitoring gases coming from the landfill and whether there is leaching. Dauk said they now have a final report ready to go to the province and city for the mandatory 300-metre setback on landfills to be reduced.

While a former landfill means a lower value property, Dauk said it has value when tied with a recreation facility and can be used for sports fields or parking. He pointed to Rundle Park in Edmonton as an example of former landfills being reclaimed for recreation purposes.

St. Albert also owns approximately 30 acres of land north of Rohit’s offered land, which combined with Rohit’s would make a parcel of around 90 acres.

During council’s Sept. 23 meeting, servicing options were presented for the three land parcels, and the city estimated Rohit's location would cost a total of $24.5 million, $16.5 million of which could be recovered from other developers through off-site levies, resulting in a net cost to the city of about $8 million.

Rohit also provided an estimate for servicing, which was close to the city’s. In his presentation, Dauk said Rohit would give the city two options: either pay $22.5 million for the land fully serviced, or receive the unserviced land at no cost.

St. Albert will be deciding between Rohit’s offer, the city-owned Badger Lands parcel (which would cost $23.5 million to service, with $16.4 million recoverable) or Landrex Ventures' 33.5-acre parcel in Erin Ridge North Landrex Ventures is offering. The city’s servicing estimates placed Landrex as the priciest option at $51.1 million, with $36.8 million recoverable, resulting in a $14.3-million net cost to the city.