For the past couple of decades Ford's Lincoln division had been stumbling along unsure what kind of vehicles it wanted to offer younger buyers.
0
May 10, 2017 12:00 AM By: St. Albert Gazette 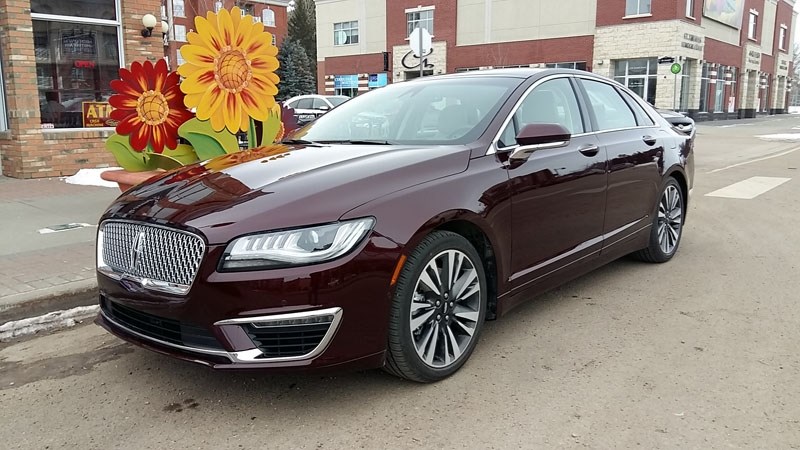 The MKZ has been refined for the 2017 model year sporting a body that is sleek and elegant.

For the past couple of decades Ford’s Lincoln division had been stumbling along unsure what kind of vehicles it wanted to offer younger buyers. Old, loyal owners who had grown used to vinyl roofs and velour interiors with fake wood trim were dying off or no longer putting pension money on new Lincolns. A few years back upper management finally determined pure luxury would be the goal, not chasing after the Germans. Cadillac had been there, done that and came up with some very nice sport sedans. Lincoln matches Cadillac almost model for model with the exception of a Hot Rod Lincoln. Although a performance package is offered to add some sporting flair to the MKZ.

The MKZ has been refined for the 2017 model year continuing with a body that is sleek and elegant. There’s a limited amount of chrome on the outside other than the signature chrome-toothed grille surrounded by optional LED headlights. The paint finish is jaw dropping. The MKZ must have the shiniest paint job I have ever seen on a luxury automobile. My Reserve 3.0 AWD was painted in “Burgundy Velvet Metallic” which as a $700 option is money well spent.

The interior has been upgraded on the MKZ with new driving aids and safety features that help it better compete in the premium midsize segment. The seats are contoured and seem to cradle you in comfort than making you sit upright. The low, sloping roof makes the interior cocoon-like. Not in a claustrophobic way, just sort of comfy-cosy. The instrument panel has been improved with real buttons and knobs instead of the touch-and-drag controls. The new Sync 3 infotainment system is a nice step forward from its predecessor with clear graphics and a quicker response time. The navigation system is much more intuitive too. The push button gear selector remains. Not sure how I feel about that. The audio system is a Revel with 14 speakers’ standard, 20 speakers optional. The Revel works well; I’ve heard better sound systems so I’m thinking the 20 speaker option might not sound any better.

If it’s technology you enjoy there is plenty built into the new MKZ. Aids that will parallel park, perpendicular assist, pre-collision assist, pedestrian detection and available adaptive cruise that will automatically bring the car to a complete stop if the driver fails to apply brakes in time.

There is no shortage of legroom front or back but headroom is a little snug because of the sloped roof. The optional fully-retractable panoramic glass roof doesn’t help either. Once fully open, the glass covers part of the back window. But the interior gets so much light it’s a fair trade off.

On the road the MKZ is hushed with little engine noise coming into the passenger cabin. A little more pressure on the gas pedal makes the 400 horsepower twin turbocharged 3.0-litre V6 easily get you triple digit speeds. Drive in a normal manner and you should get 9.5L/100 km at a steady 110 kilometres per hour. At one point during a trip down south, the MKZ’s computer showed 8.8L/100 km. That’s impressive for a 3.0 litre V6 in a mid-size car. A turbocharged 2.0-litre 4 cylinder is an alternate power-plant.

Rated at 245 horsepower, I’m not sure the four would do in a car the size of the MKZ. Handling is decent, the brakes strong and the suspension now fully adjustable, easily able to transition from normal to sport to comfort.

The rich smell of leather, real wood inside, AWD, a nice ride and a long list of features makes the MKZ a worthy choice starting at over $50,000 for the Reserve model I drove. The Select is a little less expensive at $45,800. A FWD hybrid is also available starting at just over $41,000.