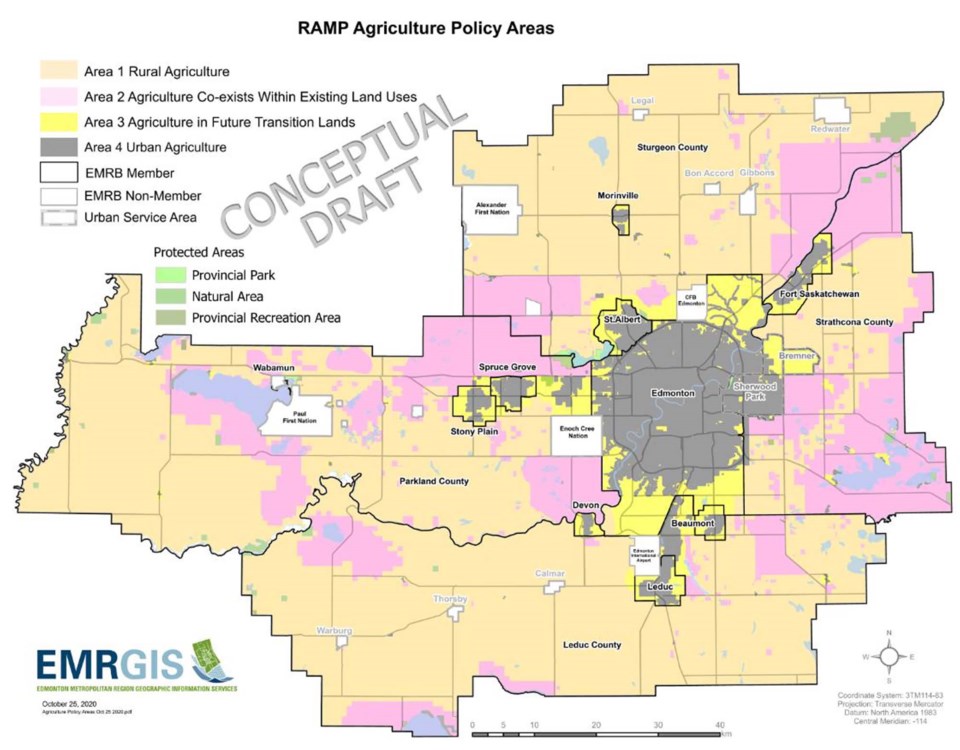 PLAN FOR FARMS? — The Edmonton Metropolitan Region Board launched a wide-ranging consultation on the proposed Regional Agricultural Master Plan Nov. 9. The plan proposes to classify farmland in the Edmonton region into one of four zones, each with different policies. This map shows how those zones might be designated. EMRB/Photo

Governments have to be prepared to pay landowners for their property if they want to get serious about protecting farmland around Edmonton, says a Sturgeon County potato farmer.

The Edmonton Metropolitan Region Board kicked off a series of online and in-person forums Nov. 9 to ask residents to help shape the proposed Regional Agricultural Master Plan.

In the works since 2018, the RAMP is part of the EMRB’s overall growth plan and will be the first region-wide plan for agriculture, said Sturgeon County Mayor Alanna Hnatiw, who sits on the RAMP task force. The plan aims to balance regional growth with food security, create a thriving agricultural sector and protect farmland from urban and industrial development.

“Once agricultural land is paved over ... it’s very difficult to reverse that,” Hnatiw said.

The RAMP discussion guide proposes that the plan divide the Edmonton Metro region into four zones, each with different policies for agriculture.

About 63 per cent of the region, including most of Sturgeon County, would be “rural agriculture,” which are prime agricultural lands to be preserved for farming for the long-term. “Urban agriculture” zones would be communities that support activities such as vertical farming and market gardens. The last two zones covered regions that either border settlements and are set to urbanize within 50 years or are places where farms and other activities have historically co-existed.

How to grow farming

The discussion guide noted the Edmonton Metro region is the most productive farm region in Alberta, being home to 25 per cent of the province’s food processing industry, 35 per cent of its top-producing soils, world-class research facilities such as the St. Albert Research Farm, and 4,655 farm operations.

But the region is also losing farmland at a rapid pace, with some 38,250 hectares (roughly eight St. Alberts) of farmland converted to non-farm use between 2002 and 2012.

The RAMP consultation aims to identify challenges faced by area farmers and ways to prevent the fragmentation of agricultural land.

Sturgeon County potato farmer Wayne Groot said his biggest challenge is uncertainty, as he is surrounded by heavy industry in Alberta’s Industrial Heartland.

“It’s really hard to make long-term plans when a big chunk of the land we farm is owned by industry,” he said.

Delton Jubinville, who farms beef north of St. Albert, said area governments should support farmers by creating a forum through which local producers could connect with local customers. He also called for the promotion of conservation easements with which farmers could protect their lands from urbanization. He said farms and homes could exist side-by-side as agricultural parks, promoting sustainable farm techniques and reconnecting people with farming.

Groot was skeptical that the RAMP would preserve farmland unless it includes plans to compensate landowners for lost development opportunities.

“For most landowners, that land is an investment, and they don’t want it frozen,” he said.

Hnatiw said this plan is about “food, fuel and fibre,” and would affect everyone, not just farmers or rural landowners. She encouraged St. Albert, Morinville, and Sturgeon County residents to take part in the RAMP consultation through online sub-regional forums this Nov. 12 and 16 and at in-person ones Nov. 21. Residents could also sign up for region-wide forums on Nov. 9, 10, 12, 16, 18 and 19, or email comments to [email protected]

“This is important work that will affect people for decades, and we need to make sure we’ve come up with some well-informed policy,” Hnatiw said.

The Gazette’s agriculture reporter was asked not to participate in the RAMP consultation sessions by EMRB administration. Board CEO Karen Wichuk said the forums are for specific stakeholders only and that it would be inappropriate to have a reporter present during them.

Visit letstalkramp.ca for details on the consultation.

U of A solves fireball mystery
Fish Friday: St. Albertans observe Lent
Good morning, St. Albert!
'I miss them a lot' Family torn in half by conspiracy theories