'I think we are in a little bit of trouble,' said Chris Sloan, who runs a large cow-calf operation north of St. Paul.
May 29, 2020 2:00 PM By: Jennifer Henderson, Local Journalism Initiative reporter 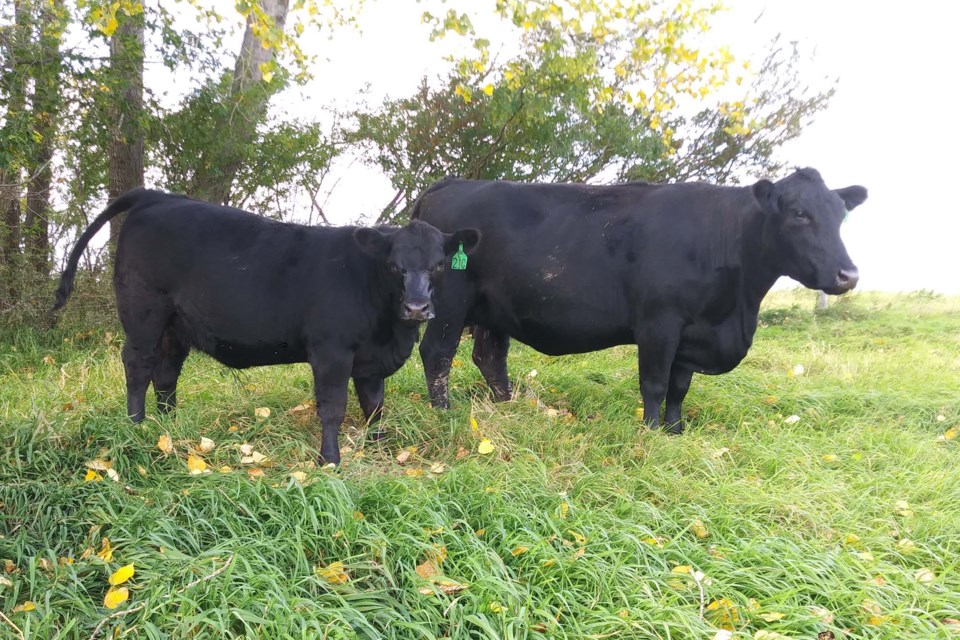 CASH FOR COWS – The provincial government announced a $42-million federal/provincial fed cattle funding program May 7 meant to help farmers pay for the cost of feeding cows held back due to backlogs at beef processing plants. Some 400,000 cows are backed up at feedlots due to processing delays related to the coronavirus pandemic. Shown here are purebred Black Angus cattle in Bon Accord. COLIN CAMPBELL/Photo

Beef industry insiders say Alberta’s cow-calf industry is in more trouble than people realize, as farmers face down the possibility there won’t be a market for their calves come the fall.

Cow-calf operations are the founding sector of the beef industry, where calves are born and raised up to weaning age (roughly six to eight months). Once they are weaned, they are typically sold to a feedlot, where they are fattened for slaughter.

But severe backlogs at feedlots, brought on by COVID-19’s catastrophic implications for Alberta slaughterhouses, could mean there won’t be room for newly weaned calves to move along the food supply chain.

“I think we’re in a little bit of trouble in the cow-calf industry, and I don’t think the government’s addressing our concerns or problems at all,” he said.

Three meat packing plants in Alberta process some 85 per cent of Canada’s beef: the Cargill plant in High River, the JBS plant in Brooks and Harmony Beef in Rocky View County. All three plants had outbreaks, forcing them to temporarily close or slow their operations, dropping Western Canada’s slaughter capacity to roughly a quarter of its usual amount. The facilities, which once processed 9,000 cattle per day, dropped to processing 2,000, which resulted in slaughter-ready cattle backing up into feedlots.

In early May, Alberta Premier Jason Kenney announced a $42-million federal/provincial funding program to help cattle producers cover the cost of feeding market-ready cattle until slaughterhouses can catch up. At the time, he estimated there were about 400,000 cattle backed up in feedlots, which could take up to 30 weeks to clear.

Kelly Smith-Fraser, chair of Alberta Beef Producers which represents 18,000 beef producers across the province, said that money isn't making its way to cow-calf producers who sell to feedlots.

Smith-Fraser said in general feedlot producers are feeling calmer now, but there is “a lot of anxiety” amongst cow-calf producers.

“The emotions that are involved right now are really close to the level of BSE,” Smith-Fraser said, referring to the bovine spongiform encephalopathy outbreak (better known as mad cow disease) of 2003.

Cow and calf prices have reportedly plummeted some 40 per cent since March.

Prices weren't good last year, either. Calf prices were so low last year that Sloan decided to keep his animals back a year in the hope of selling them to feedlots for a better price this fall.

The cost of operating farms has gone up significantly in the last decade, while the value farmers are getting for their product hasn’t risen as quickly.
According to Statistics Canada, the realized net farm income of agricultural producers (cash after costs and depreciation) fell 45.1 per cent in 2018 to $3.9 billion, which was the largest per cent decrease since 2006.

To make matters worse, in 2018, farm operating expenses increased by 6.5 per cent to $50.6 billion, which was the largest percentage increase since 2012. This was due to a 9.6-per-cent increase in feed costs, as feed grain supplies were tight prior to harvest. A sharp rise in interest rates contributed to the hardships with a rising debt level.

Fuel prices for machinery rose by 18.1 per cent in 2018, followed by a 9.3 per cent hike in 2017. Cash wages that farmers were paying out to staff increased across the country as minimum wages went up.

Fed cattle prices have hit their lowest price since October 2013.

With COVID-19 driving the price of cattle down, Sloan said he will be forced to sell his 2019 calves – who are now yearlings – and could be taking a loss on those animals. He’ll have to hold onto his 2020 calf crop until 2021.

Sloan’s operation consists of 8,000 mother cows and another 1,800 heifers. Every spring, he welcomes around 8,000 calves into the world. But when he doesn’t sell his animals, he doesn’t have money coming in – and he still has to pay to feed all those extra cattle.

Those backlogged cows can cost around $3 to $4 to feed per cow per day – an expense that rises quickly when thousands of cattle back up for weeks.

Smith-Fraser said many operations across the province don’t have the capacity to keep their calves for a year and said they will just be forced to sell at a loss.

“The amount of stress that is out there in the cow-calf sector is daunting,” Smith-Fraser said.

Calves that were just born this spring will need to move to feedlots in the fall, giving producers a matter of months before they face major hits to their revenues.

“What we could end up seeing is a really depreciated price on our calves, and we may not have the pens to go into come fall,” Smith-Fraser said.

“I get calls questioning the capabilities of (producers) to make their payments this fall, and what their farm’s future looks like.”

So far, Sloan said the provincial and federal governments have not helped operations like his, and the help they’ve provided to feedlot producers isn’t enough either.
“Lots of my neighbours (bought) calves in the fall and fed them all year and then sold them for less than they paid for. So that's just an absolute disaster,” Sloan said.

The $42 million allocated to support feedlot producers won’t go far enough, Sloan said. Beef producers estimated they would need $187 million and asked the government for the funding, but received roughly 22 per cent of the funding requested, said Smith-Fraser.

Sloan said he hates taking government money for his farm operation, but producers need help. He suggested the government pay $300 per head to help feed the animals while the supply chain is backed up.

Meanwhile, AgriStability – a federal/provincial program to help farmers manage losses from major market fluctuations, among other factors – won’t help producers immediately, Sloan noted, adding money from that program will likely find its way to farms 18 months down the road, while they are haemorrhaging cash now.

While many food industries across Alberta have been impacted by the COVID-19 pandemic, the beef industry has arguably seen the worst of it, including several deaths at meat packing facilities.

Hiep Bui, 67, and Benito Quesada, 51, two employees at the Cargill meat packing plant in High River, died of the virus after an outbreak struck their workplace. Armando Sallegue, 71, the father of a staff member at the plant who was visiting Canada from the Phillippines, also died.

The Cargill plant became the largest outbreak linked to a single facility in North America, with more than 1,500 cases linked to the plant. Nine hundred forty-nine employees, nearly half of the plant’s approximately 2,000 workers, tested positive. At least seven were hospitalized, with five in intensive care.

The JBS plant in Brooks saw more than 550 of its 2,600 staff members contract COVID-19. One man died. The illness spread to the wider community, infecting more than 1,000 people out of Brooks’ population of 15,000.

Forty meat plant inspectors across the country – 21 of whom were in Alberta – came down with the virus.

Jim Vercammen, a food supply economist with the University of British Columbia said because of the need of large economies of scale when producing beef, almost all the beef in Western Canada goes through Cargill and JBS.

Plants have become more expensive to operate as food safety standards have increased, he noted, forcing smaller plants in other provinces to close. Big producers like Cargill and JBS were the only ones able to survive.

“All it takes is a Listeria outbreak in one of the plants and people freak out and governments try to come in there and do the right thing by raising the standards. Then these little medium sized abattoirs just gradually disappear, and they just can't make any more money,” Vercammen said.

“It's an unintended impact of governments trying to make food safer.”

Smith-Fraser said the immediate need for the industry, after making sure workers were safe and confident to perform their jobs, was supporting feedlot producers.

“Those feedlot producers have to carry those animals over, they've got to hold them over and try and just put them on a maintenance ration, so that when they do get the call that that load can go, they can get to the processing plant,” Smith-Fraser said.

“Those guys have animals that are ready to be processed and didn't have any plan on feeding those cattle beyond the date that they had expected. Now they're having to carry them over for – we don't know how long it could be. It could be quite a while."

Smith-Fraser said she is an optimist and hopes that through the summer the packing facilities can work through the backlog and supply and demand will be matched by the fall.

“If we can get through the backlog, my earnest hope is that we will be fine. Consumers … still need to eat and they like our product,” Smith-Fraser said, adding consumers stockpiled beef at the beginning of the pandemic. Consumer demand for beef product made up for the lost revenue when restaurants closed.

“If we can't, we're going to see incredibly low prices this fall," she said.

“The sooner we can get back to full capacity, the better we'll be.”