“Generally consumers don't get impacted at all. It's the farmers that really take the brunt," said Jim Vercammen, a food supply economist at the University of British Columbia.
May 28, 2020 2:50 PM By: Jennifer Henderson, Local Journalism Initiative reporter 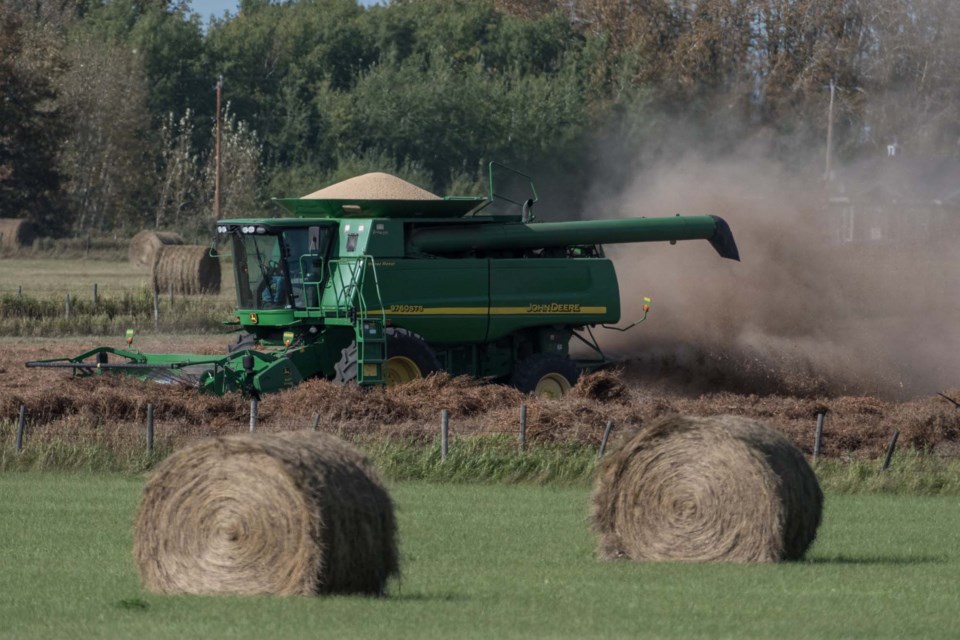 Some farmers and agriculture producers in Alberta are facing uncertainty as supply chain backlogs leave them with nowhere to send their product. JOHN LUCAS/St Albert Gazette

Over the coming days, Great West Newspapers will take a deeper look at the ways the pandemic is affecting Alberta's food supply chain and what farmers say they need in order to weather COVID-19.

COVID-19 has put a spotlight on the Canadian food supply chain, exposing weaknesses that have been lurking quietly behind the grocery store shelves for years.

With equipment prices outpacing returns on their products and unpredictable weather producing low-yield crop years, some farmers and agricultural producers have been struggling to make ends meet.

Many farm organizations operate on slim margins, with little flexibility in the supply chain to hold onto their product when a crisis like COVID-19 forces bottlenecks across their industries.

The pandemic has also revealed a fracture in the food supply chain, with producers who sell directly to consumers and grocery stores, like Paul Wurz from Morinville Poultry, saying they can’t keep up with the grocery store demand for his product. Producers who sell directly to consumers are thriving, while grocery store sales have jumped – but the other side of our food supply chain, the one that links farmers to institutions like restaurants, schools and prisons, has collapsed.

According to Statistics Canada, 54 per cent of Canadians eat out in restaurants once a week or more. When those businesses shut down in March, the ripple effects rocked the food supply chain. Despite grocery store sales surging during the first few weeks of the pandemic as panic hoarding took over, cracks appeared in other areas of the supply chain, such as processing plants. COVID-19 outbreaks in slaughterhouses not only led to loss of life, but the shutdowns and slowdowns bottlenecked the entire beef industry, as the majority of the country’s meat is processed in a handful of gigantic processing facilities.

'The straw that broke the camel's back'

Terence Hochstein, executive director of the Potato Growers of Alberta, said potato growers and the agriculture industry as a whole have been fighting an uphill battle for years, battered by frost and hail and bad weather. Now, the industry is facing an unprecedented season with COVID-19 wreaking havoc on the supply chain and causing even more unpredictability in an already unpredictable business.

“It’s the straw that broke the camel's back,” Hochstein said of the pandemic.

Right now, potato growers are being hit hard in Alberta, with the industry looking at up to a 30-per-cent reduction in acres in the 2020 growing season. Around 80 per cent of the potatoes grown in Alberta are used to produce french fries and potato chips, and with restaurants shutting down, there has been a backlog of product, filling up storage freezers and temporarily shutting down production facilities like McCain Foods because there was no market for the product.

COVID-19 also came on the heels of a bad 2019 season for agricultural producers in general. Hochstein said last year 1 million acres of crop were left on the fields across the province with early frost and snow impeding the ability for farmers to get their crops off. Insurance adjusters with the province's Agriculture Financial Services Corporation (AFSC) had completed nearly all outstanding inspections on those acres of unharvested crops as of May 20.

“Farmers in Alberta have just gone through one of the toughest harvests in recent memory and now face the many repercussions of COVID-19. We are working with AFSC to simplify their operations to be more efficient at processing claims while also improving service standards and responsiveness for farmers and ranchers,’ Devin Dreeshen, Minister of Agriculture and Forestry said in a May 22 statement.

Alberta farmers took home around 70 per cent less cash in 2018 due to high costs and low prices, according to Statistics Canada, with the 2019 harvest conditions proving to be even worse.

A report from Statistics Canada released in 2019 found Canadian farmers saw a roughly 45-per-cent drop in realized net income (cash after costs and depreciation) in 2018 – the biggest one-year drop since 2006. Alberta farmers saw their incomes plummet roughly 68 per cent to about $535,062, down from about $1.7 million in 2017.

The hit to incomes is being felt across many agricultural sectors.

In the cow-calf industry, anxiety is reaching an all-time high, with stress levels being compared to 2003 when the industry was facing bovine spongiform encephalopathy (BSE) known more broadly by the public as mad cow disease.

Chris Sloan, who owns a large cow-calf operation near St. Paul, said prices of equipment have almost doubled in the last year, while the returns on his product have not. The industry has been on a losing streak for years, Sloan said, and COVID-19 could really challenge the bottom line for many farm operators.

“I think we're in a little bit of trouble in the cow-calf industry and I don't think the government's addressing our concerns or problems at all,” Sloan said.

“It has been tough for a few years here, and some guys have been burning up some equity – and now this COVID situation, it can be the final straw.”

Under normal circumstances, pork, beef and chicken slaughterhouses are a marvel of modern efficiency, slaughtering thousands of animals daily. That efficiency has helped keep the price of meat down, with consumers always hunting for the cheapest price, said Jim Vercammen, a food supply economist at the University of British Columbia.

“In all aspects of our food consumption, you get driven down to large economies of scale, large plants, and they're the ones who win out at the end of the day,” Vercammen said.

The academic said in the past, there were more slaughterhouses in the country, but as foodborne illnesses and outbreaks hit the food supply chains over the years, such as the avian flu or mad cow disease, the standards in slaughterhouses went up and only large producers could afford to keep up with the new regulations. Slowly, smaller producers were driven out of the market and the slaughtering capacity in the country became more concentrated.

Right now, 80 cent of all of the beef consumed in Canada runs through three Alberta slaughterhouses, all of which have seen COVID-19 outbreaks, causing shutdowns and slowdowns in processing. Pandemic bottlenecks are starting to threaten the viability of farmers at the front end of the food supply chain, such as those in the cow-calf industry.

While the beef industry has seen the worst of the pandemic, with at least three deaths linked directly to slaughterhouses, the pork industry is suffering from being so interconnected globally.

Canadian pork packaging plants have seen small shutdown, but in the United States, the shutdowns have been widespread, causing backlogs of hundreds of thousands of pigs. With an oversupply of pork and nowhere for pigs to go, the price fell out of the hog market and some Canadian farmers are now selling their animals at a loss.

Meanwhile, labour-intensive industries like the mushroom industry have paid a high price for protective gear to keep their employees safe.

Janet Krayden, spokesperson for the Canadian Mushroom Growers’ Association, said it is costing the association's members $240,000 per week to keep their staff safe.

Aaron Hamer, CEO of Highline Mushrooms, said the industry already operates on very thin margins to begin with and just the cost of keeping their workers safe is digging deeply into their profits. Hamer said with mushrooms being so perishable, the industry cannot afford for an outbreak to shut down a farm and threaten their profits.

Canada’s commodities that are supply managed, like milk, eggs and poultry, are handling the impacts of COVID-19 better than other industries.

Chicken producers cut their production by 7.5 per cent in Alberta, with a 12-per-cent reduction across Canada, but industry insiders say farmers are set up to take the hit without the threat of farms collapsing.

Dairy producers have also had to take a cut in their quota, with production reduced by around five per cent to offset the decrease in the amount of milk consumed in restaurants and in morning lattés from places like Starbucks. But dairy farmers say they can handle the cut to their quota as well – it's the backup in beef slaughterhouses that is impacting their businesses more, as dairy cows go to slaughter at the end of their life.

Farm operations that grow grain are also taking a hit.

“You get this really weird phenomenon where short-term wheat prices spiked up because of the hoarding by consumers. But more distant futures prices were really low because everyone knew there's going to be a slump in the more distant future,” Vercammen said.

The price of crude oil in Alberta bottomed out in late April, trading at a negative value for the first time in history, which dragged the price of corn down.

Corn is a very strong link between the agricultural industry and the energy industry. Around 40 per cent of the corn crop in the United States goes into producing ethanol, and now with a much lower ethanol value those producers are trying to get their product into feed lots instead.

“It's going to put a much bigger supply of corn for feed grain, so it's going to push the price of feed grains down even further, which will then pull down all prices,” Vercammen said.

As a result, Vercammen said the price of meat will go down because the price of feed has gone down, noting the entire agriculture industry is interlinked.

Although there is a glut of food available, it isn’t easy to turn an industrialized food chain on a dime to respond to a worldwide crisis like COVID-19.

“These are all fine-tuned. These supply chains know ... on average what restaurants sell and what consumers want,” Vercammen said.

Despite the challenges farmers are facing behind the scenes, Vercammen said the food supply system itself is strong and resilient with the ability to produce enough food at the farm level.

“Generally consumers don't get impacted at all. It's the farmers that really take the brunt.”