Alberta industry says plastics are not the problem, waste is 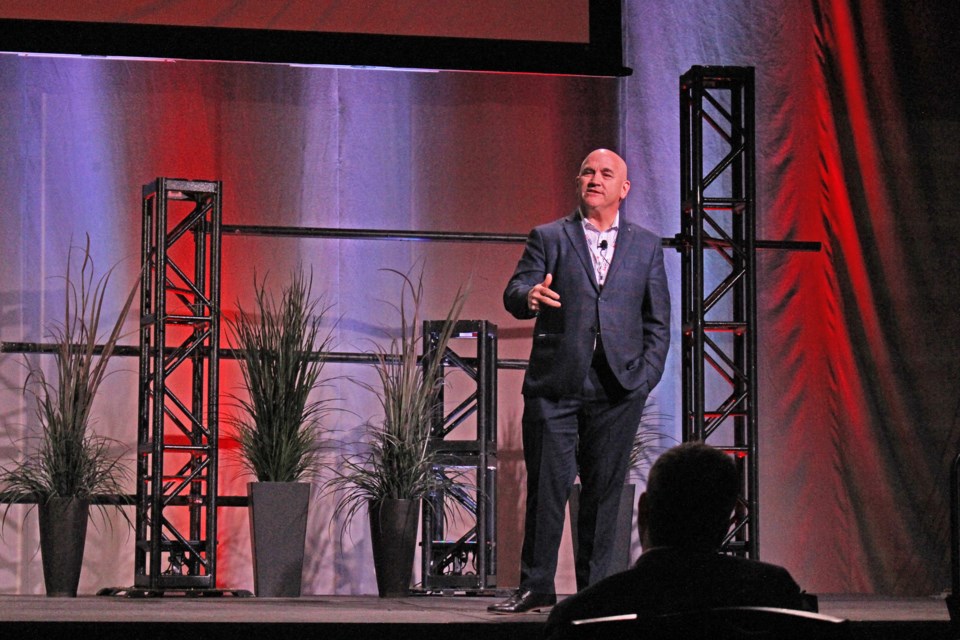 Bob Masterson, president and CEO of the Chemical Industry Association of Canada, spoke at the Alberta Industrial Heartland Association's annual conference about what needs to happen to transform the plastic industry. BRITTANY GERVAIS/St. Albert Gazette

Petrochemical companies in Alberta said they see opportunity in plastic waste, even as Environment Canada released a report backing the federal government’s plan to ban most single-use plastics next year.

Plastic packaging is the biggest contributor of plastic waste in Canada, according to a draft version of the report. In 2016 alone, it’s estimated 29,000 tonnes of plastic pollution ended up in the environment.

Dow Canada’s petrochemical complex in Fort Saskatchewan is one of the largest ethane-cracking facilities in the world, turning natural gas-based feedstock into polyethylene pellets for plastic packaging.

Plastic can extend the shelf life of food and decrease waste, Edgington said, and switching from plastic to other materials, like paper or glass, can actually increase carbon footprints and greenhouse gases.

Eastern Research Group, an independent research company, led one study for the Canadian Plastics Industry Association that compared a mix of different plastic packaging with substitutes such as paper. It found producing plastic requires fewer resources than other possible substitutes, and at the end of its life, paper in a landfill may emit greenhouse gases as it breaks down.

“I’d say it’s great for the environment, but you still need to recycle it,” he said. “We don’t like the term plastic waste because we think plastic has end of life value.”

Plastics are big business in Canada. A 2019 study of the industry said annual sales of plastics are worth an estimated $35 billion, and plastic exports account for 40 per cent of the country's domestic output per year.

But because Canada’s plastic economy is mostly linear, with 87 per cent of plastics ending up in landfills or the environment, the report notes of a massive missed opportunity for Canada’s economy —  by 2030, the value of unrecovered plastics could rise to $11.1 billion.

Bob Masterson, president and CEO of the Chemistry Industry Association of Canada, spoke to more than 1,100 attendees at the Alberta Industrial Heartland Association’s stakeholder meeting on Jan. 30 about what industry needs to do to make that shift from a linear to circular economy.

"The industry is exceptionally worried about plastic waste and what it means for the current business model," Masterson said. "Let's be honest with ourselves, the days of making plastic out of scarce natural resources, using them once and very, very briefly at that, and then disposing them into a landfill or into the environment – those days are coming to an end, quickly."

First, municipalities cannot be expected to take the lead on recycling plastic, Masterson said. Industry has to take responsibility to pay for recovery and establish markets around already recyclable plastics. Every province should look at transitioning to B.C.'s model, called Recycle B.C., he said, where business owners pay a fee for packaging they create that will eventually end up in someone's blue bin.

"B.C. does a good job, Alberta does not, and Ontario does not. We do not recycle the stuff we put into our blue box already. Why does industry have to do that? We can't rely on muncipalities. Go talk to your mayors, where does recycling actually rank on their citizens' priority list? They're not going to invest in that. The only people that can do that, who can create those markets, is industry."

Next, industry must create an internal demand for post-consumer plastic within its own business. For example, recycled plastic could be turned back into chemical feedstock, he said.

And it's going to have to happen soon – Coca-Cola and Nestlé are two corporations demanding plastic producers create packaging containing at least 50 per cent of recycled material by 2025. As an example, Masterson pointed to Dow as one of the first companies to market plastic resin made of 70 per cent recycled material.

Industry must also design products that are recyclable in the first place.

"Most of the time (resealable plastic bags) are made with seven or eight different types of plastics laminated together. But it can't be recycled," he said. "The good news, Nova Chemicals is one of the first companies to produce and market a 100 per cent polyethylene, fully-recyclable plastic pouch. Those are above demand, and I expect we will be seeing a lot more."

Finally? Industry needs to invest in technology, infrastructure and new markets in developing countries to mitigate plastic waste leakage, Masterson said, which can be a challenging feat to tackle without building a comprehensive partnership between industry and multiple levels of government.

There is opportunity for plastic industry to build a new business model off of post-consumer plastic, but it will take robust and sincere transformation, he said.

"There is indeed a future in where we solve the plastic waste crisis, and this challenge at scale and globally, where we re-earn consumer confidence and we avoid the leakage of plastic waste into our oceans. That future is right around the corner."

A zero plastic waste economy would deliver significant benefits to Canada, Edgington said. Dow Canada is aiming itself to ensure all the products they sell are 100 per cent reusable, recyclable, compostable or biodegradable by 2030.

While plastic waste is notorious for taking hundreds of years to decompose, roads built with plastic are more durable and longer lasting. Since 2017, Dow Canada’s combined efforts have built more than 100 kilometres of road made of asphalt and recycled plastic in countries across the world, diverting more than 200 metric tonnes of plastic. The company also diverted sixteen tonnes of recycled plastic to build four schools in Columbia, Edington said.

Clean-up efforts are also a focus. Dow Chemical is a founding member of the Alliance to End Plastic Waste, which has pledged over $1 billion to tackle environmental issues over the next five years to develop, deploy and scale solutions to minimize and manage plastic waste.

“We believe that plastic is too valuable to end up in landfills and should never, ever be in the environment,” he said, adding he was encouraged to see other plastic companies get involved.

“It’s going to take not just the rest of the producers, but the converters and brand owners, consumers, governments … it’s really going to take a joint effort to solve this problem.”