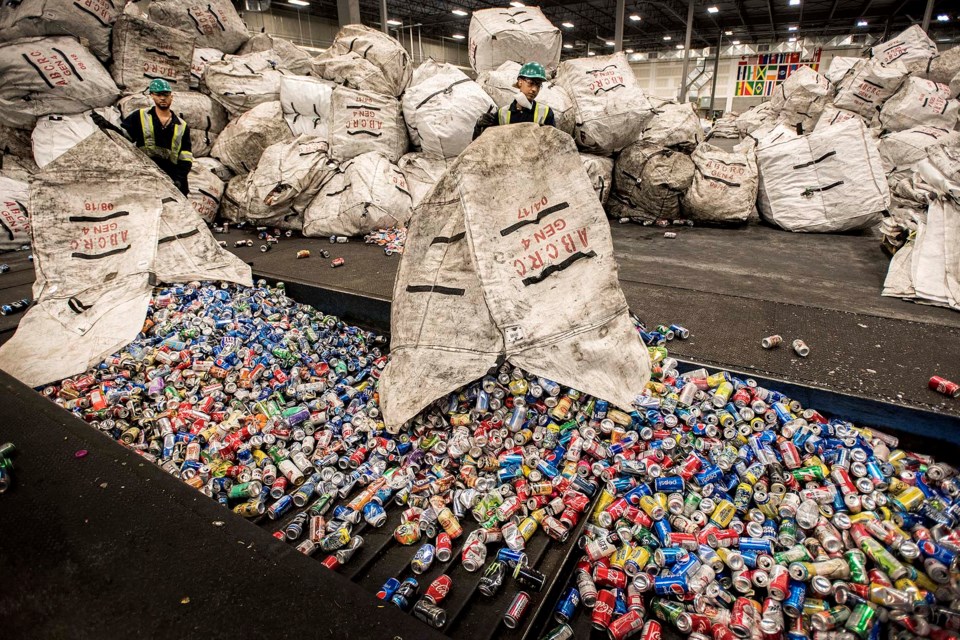 LIKE THIS, FOR EVERYTHING – Workers empty bags of aluminum beverage containers onto a conveyor belt heading for a compressor at the Alberta Beverage Container Recycling Corp. processing facility in St. Albert. The Alberta Legislature has called on the province to investigate implementing extended producer responsibility programs for Alberta, such as the one for beverage containers.

Waste-reduction fans in Alberta were celebrating last week after the Alberta Legislature officially called on the province to take a look at extended producer responsibility.

Members of the Alberta Legislature voted unanimously Oct. 26 in favour of a motion from Spruce Grove–Stony Plain MLA Searle Turton to urge the provincial government to examine the feasibility of implementing measures such as extended producer responsibility (EPR) that balance the economic and environmental needs of Albertans.

EPR is a policy that puts the cost of managing a product at the end of its life onto its producer rather than its consumer. In most cases, this means industry creates a system to handle a waste stream and chips in cash to run it.

Alberta has several EPR systems already (such as the bottle depot system). Unlike every other province west of Quebec, Alberta does not have one for paper and packaging, which includes pretty much everything that goes into your blue recycling bag or bin. Many groups, including the Alberta Urban Municipalities Association, have called on the province to bring in EPR for paper and packaging.

We’re already paying for EPR in Alberta despite not getting it as companies incorporate the cost for it in their prices which they set nationally, said St. Albert Mayor Cathy Heron. Instead of EPR, municipalities are paying an additional price to set up their own recycling systems – about $107 million a year, a 2019 AUMA study found.

When asked why he made his motion, Turton said he had spoken often with Heron and other Edmonton-area councillors about EPR and lobbied for it during his years as a city councillor.

“Alberta is actually the only province in western Canada that does not have EPR,” he said, and could reap substantial economic benefits if it brought such as system in.

Municipalities are already under the gun financially due to the pandemic, and this lack of EPR means they have to foot the bill for recycling, Turton said. Meanwhile, manufacturers are charging Albertans for EPR and pocketing the money without giving us that service.

We need a made-in-Alberta solution for paper and packaging waste, and Alberta needs to talk about how to bring it about, Turton said. This motion mandates the province to have that conversation.

“This is probably one of the biggest motions concerning the environment and recycling in the province of Alberta in the last 10 years,” Turton said.

Recycling Council of Alberta executive director Christina Seidel said she was very excited to hear of Turton’s motion, as it was the biggest move that the province had made yet on EPR.

“This is progress for EPR.”

That 2019 AUMA study found a provincewide EPR system for paper and packaging would recycle about 21,000 tonnes more waste, prevent about 72,000 tonnes more greenhouse gases (equivalent to not burning 952 tanker trucks of gasoline, the US EPA reports) and cost $4.7 million a year less to run than our current recycling systems.

“There are a lot of jobs that can be created by just properly disposing of these products,” Turton said, noting he knows of a recycling company in Bashaw that could expand substantially if there were an EPR system in place to supply it with agricultural plastics from Alberta. (Province-wide EPR would create about 219 full-time jobs, the 2019 AUMA study found.)

Heron said she was glad Turton had raised EPR at the legislature, as she had been lobbying the province about it for years. A province-wide EPR system like the one in B.C. would save St. Albert residents money and help them recycle pesky products such as those plastic clamshell containers. It could encourage companies to make products that produce less waste.

“You won’t have as many twist-ties in the Barbies you buy,” Heron said.

Turton said the province is required to follow through on his motion and Environment Minister Jason Nixon was excited about EPR when he spoke to him about it. He expects to see progress on this issue within the next two years.