Anthony at Your Service brings delivery to your doorstep

He picked up two bags of food and gently placed them in the backseat of the four-door mid-sized beige sedan. It was the first delivery of the day and he was excited to hit the road.
0
Mar 22, 2017 12:00 AM By: Dayla Lahring 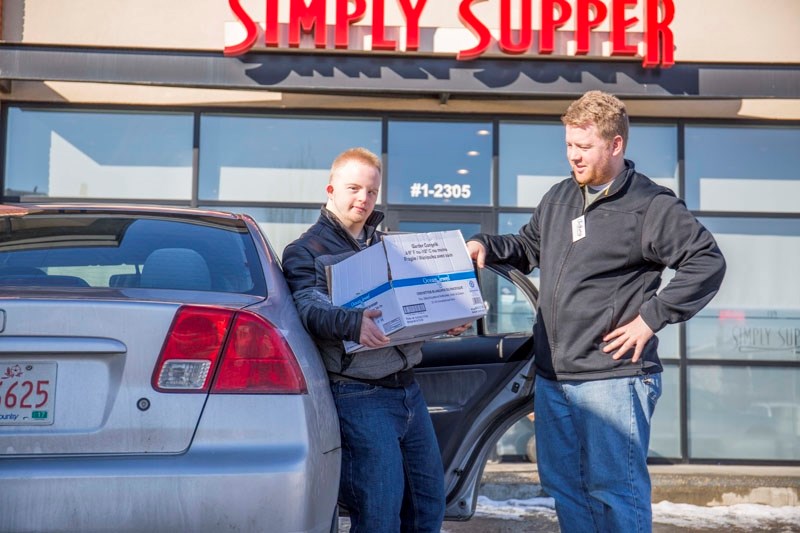 He picked up two bags of food and gently placed them in the backseat of the four-door mid-sized beige sedan. It was the first delivery of the day and he was excited to hit the road.

Christian Bayus, 26, started working at Anthony at Your Service in February. The delivery service offers employment for individuals who have developmental disabilities.

“I like it,” he says smiling. “It feels pretty great.”

This has been his favourite job to date, as it allows him to work on a flexible schedule so he can focus on his other passions in life: sports, bodybuilding and music.

Christian’s mother, Karen, says in the past Christian has been placed in jobs where he was expected to stick to a daily schedule and sometimes work in seclusion.

The 26-year-old, who has Down syndrome, thrives in social situations and prefers to work with people rather than in isolation. When alone, he gets frustrated and is no longer interested in the work.

“So I thought, ‘how do I get him in a job?’ because I can’t train them on what he needs. So that’s the beauty of Anthony at Your Service, they already understand what he needs.”

Anthony at Your Service began four years ago as a way to get people with developmental disabilities in the community meeting people while earning an income.

It offers a range of services from delivery services to picking up people’s groceries.

The employee’s personal family support worker will join them for their shift, driving them to their drop off and pick up locations and support them in their tasks.

Deborah Barrett, owner of Anthony at Your Service, has a child with disabilities. Her son, Anthony, inspired the creation of the business.

“When he graduated there wasn’t really a lot available for him, so I knew we needed to make something for him. He needs to work in a place that’s flexible where he can do things in short bursts.”

A delivery service was the immediate right choice, as it fit perfectly with his personality. It also offered him the flexibility he needed to go to doctor’s appointments.

Barrett says people, whether having a developmental disability or not, just want to contribute to the world around them.

Anthony at Your Service began in Edmonton and has been slowly expanding into St. Albert. A few local businesses, such as Over the Top Cakes, have started using the delivery service as a way to deliver their goods while giving back to a good cause.

Christian is Anthony at Your Service’s first St. Albert employee, and Karen says she hopes more deliveries start to take place locally, since most deliveries are in Edmonton.

Christian is saving up for a flight ticket to visit his cousin in Montreal. His cousin is a professional bodybuilder, which has inspired Christian to join Movimento, a training facility in St. Albert, in addition to working out at the gym a couple of times each week.

Travelling to Montreal might be his short-term goal, but Christian says he’s working towards bigger dreams in life. The job gives Christian steady employment while developing life skills for the future.

“I want to own my own house and get married,” he says smiling.

For more information on Anthony at Your Service, go to their website at www.anthonyatyourservice.com