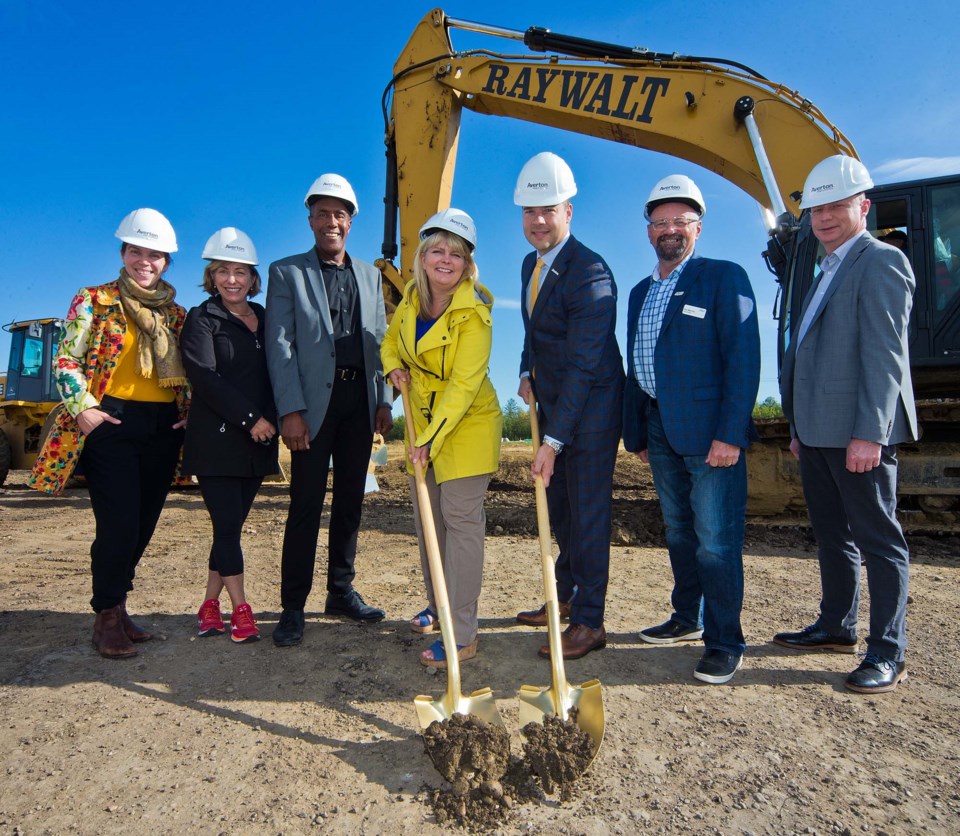 The first phase of a development in South Riel officially broke ground in a sod-turning ceremony with dignitaries Wednesday morning.

Averton Homes received the green light from city council in April for most of its three-phase development, which will see 800 residential units, seniors housing and commercial properties built across from the Enjoy Centre. The final and most dense portion was not approved for redistricting and requires further work with the city.

Averton president Paul Lanni said he is “very excited” to finally get the ball rolling, after first stepping foot onto the land seven years ago and facing years of delays, including from city sewer line upgrades for the area.

The first phase, dubbed Area A, will mostly consist of townhouses and will have an overall density of 40 units per hectare. Lanni said Averton plans to get most of the servicing for Area A complete this year and anticipates construction to take two to three years.

Mayor Cathy Heron said it is one sod-turning she “would never miss” because the development has been such a long time coming. She described the project as the “missing middle” for housing in St. Albert.

“It’s going to be a nice community and I know there’s people that want to live here. It’s probably a bit of a younger generation that will choose to live here,” Heron said. “It will be affordable; it will be different. The traditional values of a white picket fence and a big backyard are not for everyone, and St. Albert doesn’t offer much else, so this is what we call the missing middle.”

Midtown received a lot of pushback from residents during a public hearing on the development in April, mainly due to its third phase, called Area C. Plans for Area C include buildings between six and 12 storeys high to achieve a high density of 186 units per hectare. Area A will have a density of 40 units per hectare and Area B will have 60.

Lanni said the land use for Area C has been approved and Averton will try again this fall to have redistricting for the high-density phase approved by the city.

Midtown’s target is to reach an overall density of 80 units per hectare, and Lanni said those six to 12 storeys will allow Averton to ensure it meets those requirements. St. Albert developments are required by the Edmonton Metropolitan Regional Board to meet a minimum residential density of 40 units per hectare.

Lanni added the company was asked to come forward with a “bit more information” on what the land use will look like.

“We’re confident we can get back to council with a clearer picture on that,” Lanni said. He added Averton is not looking at changing designs on Area C.

It is important to get redistricting of Area C approved, Lanni said, so Averton can get started on a planned seniors complex within that area next year.

“Our hope is by this time next year we’ll have been able to kick that off as well,” Lanni said. He noted Averton is not sure yet on timelines for Area B.

Heron said as phase one of Midtown begins to take shape, she expects contention surrounding Area C “might be alleviated and people might be more accepting.”

“Everyone has been bending over backwards to make this happen, so I think our city hall is very much business friendly, open for business,” she said.