The St. Albert Farmers’ Market was buzzing with busy bees on Saturday as people tried to guess how much honey was in one vendor’s hive.
Aug 24, 2017 8:50 AM By: Dayla Lahring 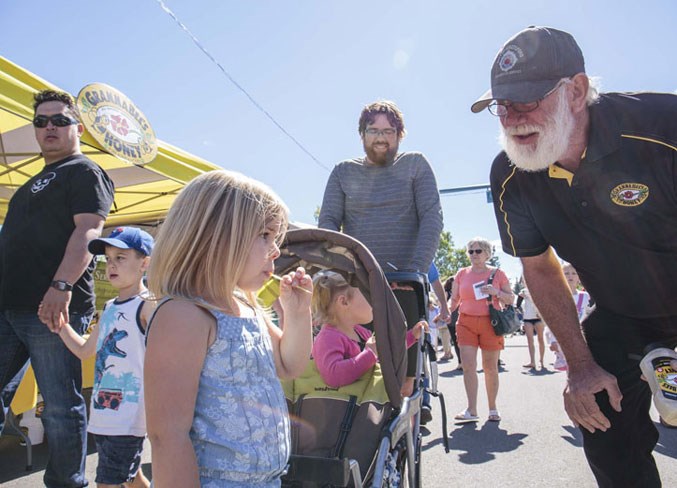 Olivia Vink, 4, tastes some sample honey at the Gramma Bee’s Honey booth on Aug. 19. Dick Heinen leans over with a bottle of their signature unpasteurized honey, while handing out samples to celebrate Bee Day at the St. Albert Farmers&#8217; Market.

The St. Albert Farmers’ Market was buzzing with busy bees on Saturday as people tried to guess how much honey was in one vendor’s hive. “I love that they’re doing Bee Day at the market,” says Dick Heinen, who was managing the Gramma Bee’s Honey Booth. “I’ve been a big advocate about educated the general public on the health benefits of pure honey.” He was one of five honey vendors at the market celebrating Bee Day. Agatha Grochowski, manager of the farmers’ market, says she wanted to centre the day on bees to bring awareness to the steadily declining bee populations worldwide. “Bee populations are so important for food production,” she says. “We’re noticing with the honey bees’ dwindling population that there’s been a big movement that’s been going on to educate people about bees.” Each vendor was asked to bring honey-making equipment and be ready to answer any questions. Heinen says they decided to bring an inactive hive to the market and have a contest. He says the business specializes in unheated and unfiltered honey, which means the honey is extracted from the hive without using heat. “Pasteurized and filtered honey has nothing in it because everything has been either heated out of it or filtered out of it,” he says. “Pure honey is filled with nutrients.” He says they feed the bees ‘bee-healthy’ foods that include essential oils. One hive can produce around 200 pounds of honey each season. As children crowded around the five-foot wooden beeless box, they took a shot at guessing how much was in the hive. In the end St. Albert resident Bradley Hove won five kilograms of Gramma Bee’s Honey. Of the 4,805 teaspoons of honey in the container, he had guessed 4,800. Elsewhere in the market other vendors had prepared to promote Bee Day. Matthew Thiessen, who partnered with his parents to run Beary Berry Honey, says recognizing the declining populations of bees is important. “Bees are very important in our society and in our environment. Without bees there’s a lot less pollination that goes around, they have an essential role,” he says, standing in his bee suit and holding a metal canister. The honey business sells their honey at Save-On Foods and specializes in strawberry, cranberry, blueberry, red raspberry, black raspberry, and cinnamon flavours. Around six years ago Alberta had harsh winters and bee businesses lost some of their colonies. This past year they’ve had 450 hives, a decline from their usual 780 hives. “It was a harsh winter but it’s getting better,” he says. Cameron Weichel produces honey in Stony Plain. His business, Good morning Honey, specializes in unpasteurized clover honey, which he says is a popular type of unpasteurized honey. “60 per cent of our honey we actually sell to Japan, because they love clover honey,” he says. He says honey has healing properties and can help with pollen allergies. “I’ve had cuts and I’ve put it on my cuts and it’s healed it,” he says. “Pure honey also has a small portion of pollen in it, which helps people with allergies build up a resistance and immunity.”