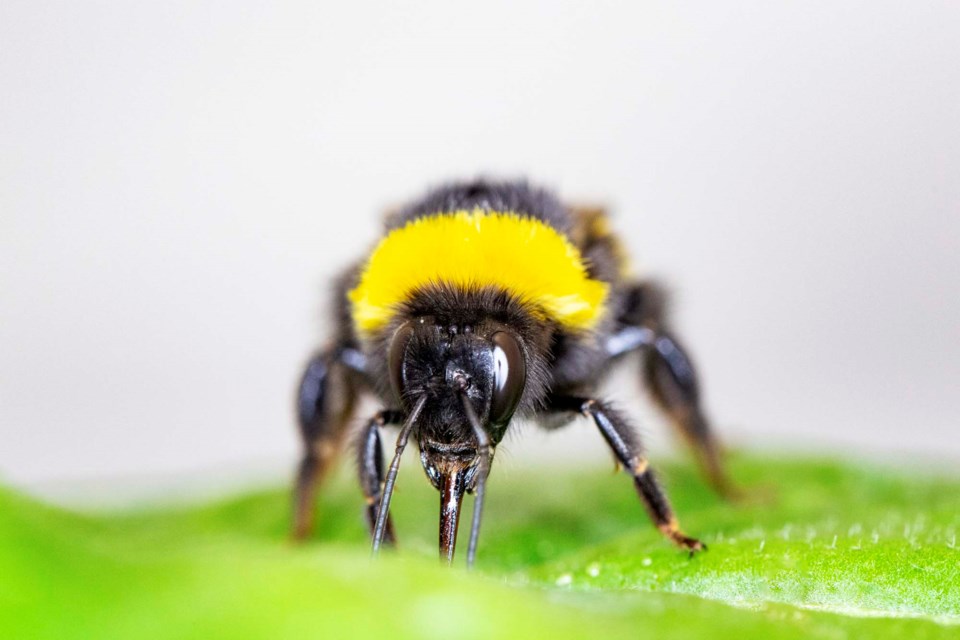 MUNCH MUNCH — A bumblebee (Bombus terrestris) worker bites a hole in a plant leaf. A Swiss-led team of researchers has found that bees can make flowers bloom earlier by biting them. HANNIER PULIDO/Photo

Bumblebees will bite flowers to make them bloom earlier, new research suggests – and that could help both creatures better adapt to global heating.

Evolutionary biologist Mark Mescher of ETH Zürich (Swiss Federal Institute of Technology in Zürich) co-authored a study in Science May 21 on how bumblebees damage the leaves of flowering plants to accelerate pollen production.

In an email, Mescher said he and his team had been studying how plants respond to the eggs of plant-eating bugs when they noticed that bumblebees kept biting chevron-shaped holes in the plants. Since the bees weren’t eating the leaves or carrying the bitten bits away, the team theorized that the bees might be trying to get the plants to flower earlier, as physical stress was known to affect flowering.

The team took pollen-starved bumblebee colonies and exposed them to tomato and black mustard plants, removing the plants once the bees had bitten up to 10 holes in them. (Mescher said the bees pierce the leaves with their tongues and cut the holes with their mandibles.) They found that the bitten plants flowered up to 30 days earlier than unbitten ones. When they tried to replicate the bites using forceps and razors, the plants bloomed just 25 days earlier, suggesting there was some sort of bee-specific factor here the scientists couldn’t replicate.

The team repeated the experiment outdoors with plants they either replaced or mowed periodically to prevent flowering. The team found that the bees still bit the plants, but did so less by late April when plants outside the test area started to bloom, suggesting that the bees bit more when pollen was scarce. They also saw two other wild bumblebee species biting the plants. Mescher said that this suggests this behaviour is evolutionary ancient and widespread, and likely present in North American bumblebees.

Bumblebees feed on nectar and pollen and need lots of both when they establish colonies in the spring, the team noted. This study suggests bee bites can somehow trigger earlier flowering in plants, providing bees with more food and signalling plants that there are bees available for pollination.

“We think it is pretty remarkable that the bees are actively interacting with the plants in a way that causes them to flower earlier than they would otherwise,” Mescher said.

Mescher said this mechanism could make bees and flowers more resilient to climate change, which could otherwise throw bee emergence and flowering out of sync through temperature changes.

“Not sure if there are any implications for florists,” he added, when asked if florists should hire bees to get flowers to bloom faster.

“They probably have more practical methods for regulating flowering time.”