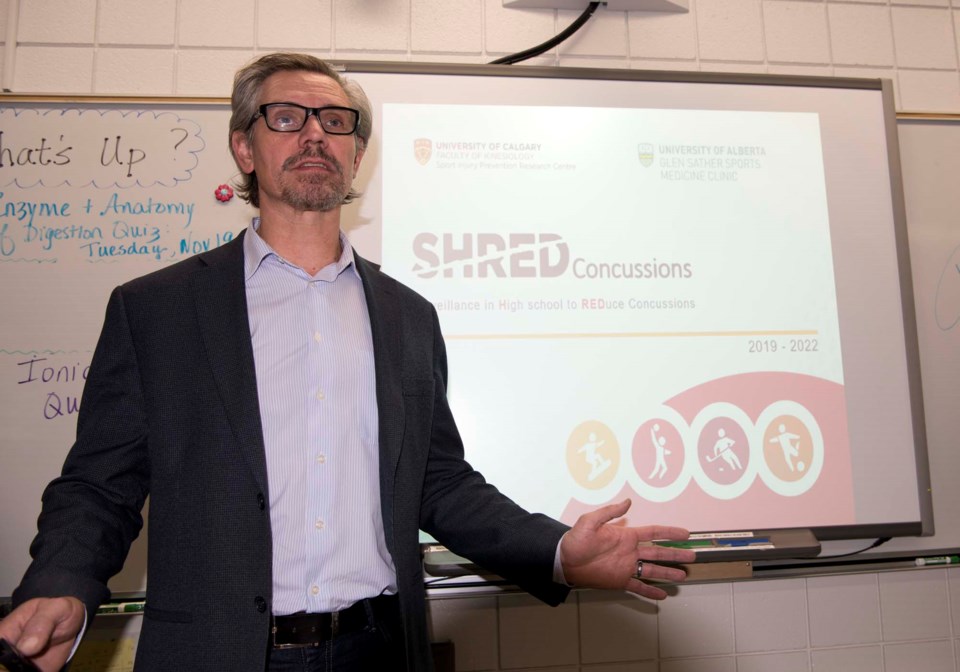 HEADY RESEARCH – U of A neuropsychologist Martin Mrazik speaks to about 100 Bellerose Composite students Thursday about the SHRED Concussions study. He is seeking about 200 Edmonton-area Grade 10 athletes to take part in this Canada-wide three year study on concussions in youths.

“I was just playing around with my friend on the street and he pushed me,” he said, and he hit his head on the ground.

Segger blacked out for 10 seconds. Later, when his parents asked him how many fingers they were holding up, he guessed wrong, as he couldn’t see straight.

Segger said his second concussion came when he blocked a soccer ball with his head, and it left him dizzy and nauseous. He doesn’t recall the details of his third one – his forgetfulness was probably not concussion-related, he added.

Segger was one of about a hundred Bellerose athletes who piled into a science lab at the school Thursday to hear about the Surveillance in High School to REDuce Concussions (SHRED) study – a Canada-wide project backed by a $12-million grant from the National Football League that looks to study concussions in high-school athletes.

There’s a heightened interest in concussions right now as the NFL recently settled a $1.1-billion lawsuit based on them, said Mrazik, a clinical neuropsychologist at the University of Alberta. High-profile hockey and football players have also come forward with reports of cognitive and mental health problems, and researchers want to know if concussions are to blame.

“Every year, there’s about 3 million concussions that happen” in North America, Mrazik told the students. About half of those happen to high school students.

About 20 students raised their hands when Mrazik asked if anyone had ever had a concussion. Thompson said about 13 Bellerose students had reported having concussions in the last couple of months, one of which was school-sports related.

Concussions are serious injuries that can lay you out for a long time, Segger said – he couldn’t read without a headache for two weeks after his first one.

“Even just running, with the bouncing of your head, it hurts.”

While we know a lot about the short-term effects of concussions – dizziness, memory loss, irritability – Mrazik said researchers know little about the long-term ones. Most concussion research has also focused on pro or college athletes, who have much different brains and bodies than high-schoolers.

Led by University of Calgary physiotherapist Carolyn Emery, the SHRED study hopes to follow 6,000 Grade 10 high-school athletes for three years to see what happens to them after a concussion.

“This is the biggest study that’s ever been done in the history of any scientific research related to concussions,” Mrazik said, and it involves 10 universities across Canada.

“We want to reduce the incidence of concussions. We don’t want concussions to happen, and we need to know how (to prevent them).”

Mrazik said students who sign up for the study will undergo a range of tests measuring blood biomarkers, balance, cognition, physical abilities, and psychological functioning to create a baseline, with the first round of testing scheduled for Dec. 5. Students will answer short online surveys each week on sport participation and injuries, and report any injuries (concussion or otherwise) to a sports therapist who will visit Bellerose each week. That therapist will evaluate their injuries and, if they have a concussion, get them treatment at the Glen Sather Sports Medical Clinic within 48 hours that will include an MRI scan.

Researchers will be looking for any changes in the student’s physical and mental traits after an injury to see what factors make them more likely to receive or recover from concussions, Mrazik said. This research should help them create and test concussion prevention plans.

Mrazik said his team hopes to recruit 200 Edmonton-area athletes and plans to take their recruitment drive to other St. Albert schools.

Segger said he plans to join the study to help other students who might have concussions and make use of its medical care if he suffers another one.

Parents can hear more about the study at an information session at Bellerose this Nov. 20 at 6:30 p.m. Other questions should go to [email protected]