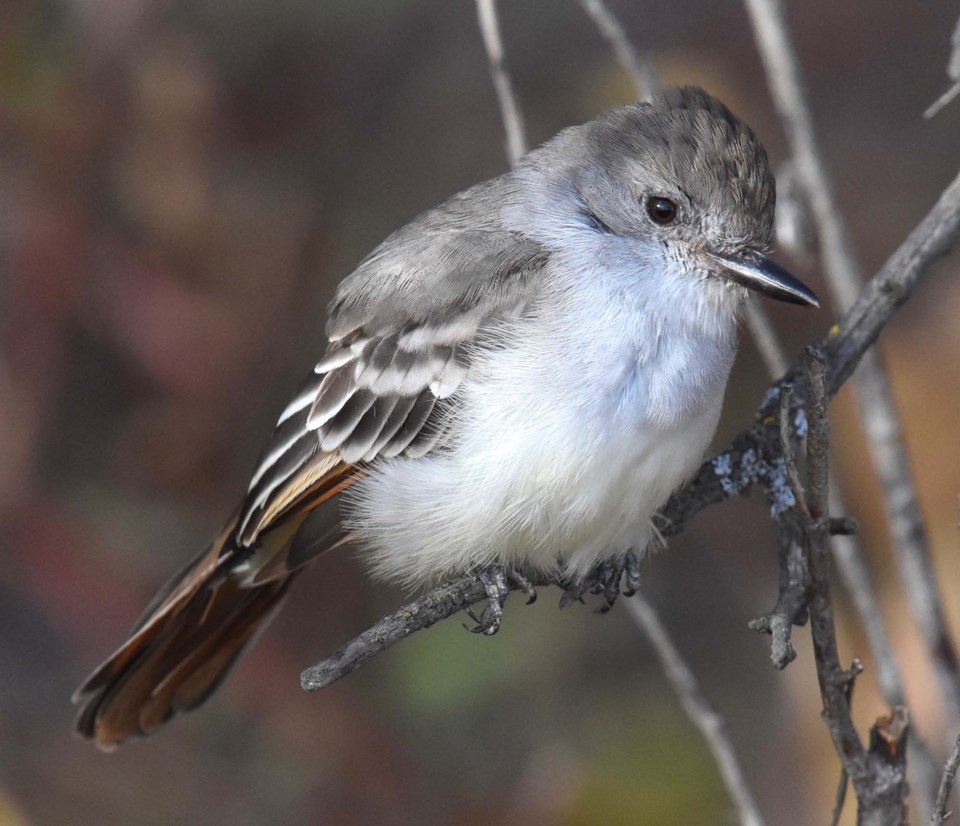 RARE VISITOR – Alberta birders have flocked to Big Lake this month in hopes of spotting this ash-throated flycatcher – the first of its kind ever reported in this province. The bird was first confirmed to be at Big Lake on Oct. 9 but may have been in this area since mid-September. LUDO BOGAERT/Photo

Alberta birders are flocking to Big Lake this month to check out an ashy flycatcher that has never been seen before in this province.

Dozens of birdwatchers from across Alberta have dropped by Big Lake in recent weeks in hopes of catching a glimpse of an ash-throated flycatcher frequenting the woods near the parking lot by the John E. Poole wetland boardwalk.

It’s the first time this bird species has ever been seen in Alberta.

St. Albert birder Alan Hingston said the bird was first reported to the eBird citizen science website on Oct. 9 by one Logan Bradley.

“The bird was first reported as a great-crested flycatcher,” Hingston said, which resembles the ash-throated and is more typical of Alberta, but experts who reviewed the photos soon realized it was an ash-throated.

News of the bird spread fast, and at least six people were at the boardwalk’s parking lot the next morning to try and spot it, Hingston said. Many did, leading to a plethora of photos online.

Edmonton birdwatcher Don Delaney said he saw the bird on Oct. 10 and 11, and said others had spotted it as late as Oct. 15. He’s met birdwatchers that said they’d come from Calgary, Lethbridge and Rocky Mountain House just to see the bird.

“I have never seen the ash-throated flycatcher before,” Delaney said, and he was excited to see it.

Jocelyn Hudon, curator of ornithology at the Royal Alberta Museum and manager of Alberta’s official bird list, confirmed this was the first ash-throated flycatcher ever seen in this province.

“There are some records from B.C., even Ontario and Nova Scotia, but this is the first one for Alberta.”

Hudon said researchers have since determined this bird was spotted around Big Lake back on Sept. 13 but it was not identified as an ash-throated at the time.

Out of place and doomed

The ash-throated flycatcher is a relatively common robin-sized bug-eating bird that has a pale yellow belly, cinnamon edges on its primary wing feathers, a broad cinnamon stroke down the centre of the underside of its tail, an ashy grey head and face and a whitish throat, reports the Cornell Lab. The great-crested flycatcher generally has more yellow on its belly and more rusty brown in its tail and primaries.

The ash-throated flycatcher lives in the desert and scrubland of the southwestern U.S. and does not typically come anywhere near Canada, reports the Cornell Lab.

“It’s way out of its range,” Delaney said, and no one’s sure how it got here – it may have been blown off course by a storm, or it may be confused.

Delaney said this bird didn’t behave like most of the flycatchers he was familiar with – instead of sitting high up in a tree, this one was down low, and would fly a few feet above the ground as it sought out tasty caterpillars. It looked very healthy and made an occasional short “peep” sound as it hunted.

Hingston said this bird is unlikely to survive if it sticks around Big Lake, as it’s supposed to be in Mexico at this time of year.

“The weather at this time of year is not very kind to a flycatcher,” he said.

“Unless it relocates in a hurry, I’m afraid it’ll end up as a casualty of the weather.”

Delaney likened this bird to the unusual Costa’s hummingbird that showed up in Sherwood Park a few years ago. That bird died from the cold, but this one might have a better chance, as it’s bigger and has a more diverse diet that includes berries.