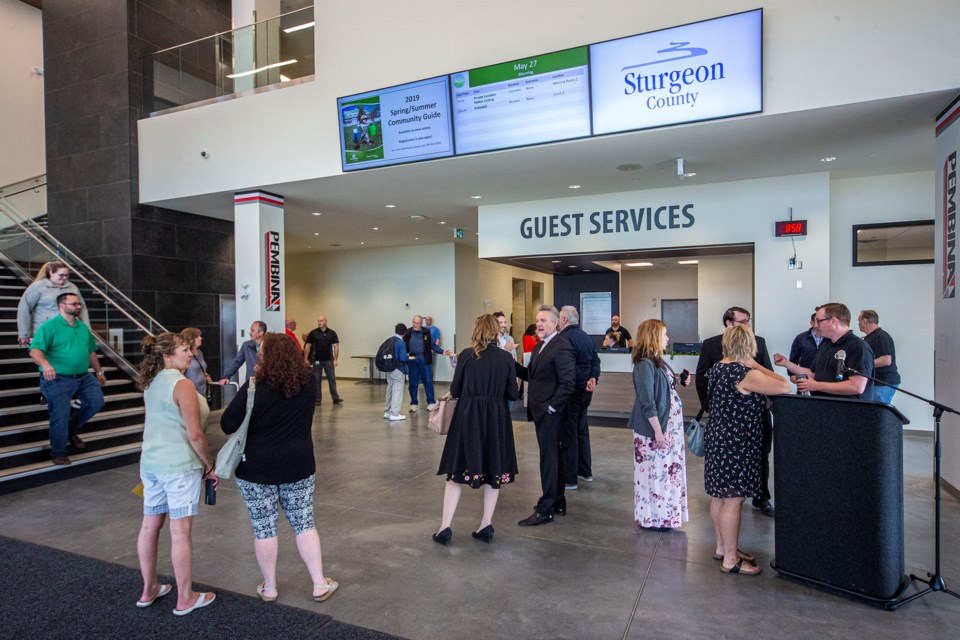 Morinville town council plans to erect a towering sign on Hwy. 642 using spare cash from the construction of the Morinville Leisure Centre.

Councillors voted unanimously Oct. 13 to borrow about $3 million to finish construction of the Morinville Leisure Centre. Some $160,000 of this would go toward a road sign for the centre.

Town council has been borrowing chunks of cash to finance the MLC’s construction, which was budgeted at $30.5 million once you include land costs. This last chunk of borrowing would cover landscaping, the toboggan hill and costs previously expensed on the town’s line of credit, and would bring the town’s MLC-related debt to about $20 million.

Town corporate services director Shawna Jason said the MLC is under budget by about three per cent ($799,679). She proposed about $160,000 of this be used to add an outdoor digital sign to the MLC upon which the town could post notices and emergency alerts.

Town chief administrative officer Stephane Labonne said the pandemic proved the town needs ways to quickly get messages out to the public, such as a digital sign. He added this sign probably should have been included in the MLC’s plans from the start.

Town engineering and facilities manager Jim Gourlay said the sign would be about 8.5 metres high and would feature a 1.7-metre-by-3.7-metre digital display. He plans to place the sign next to the MLC’s turnoff of Hwy. 642, and said it would be installed this fall or next spring.

Council directed administration to proceed with the sign once they receive at least two price quotes for it.