Dan Stoker knew something was up when he heard a cheery little songbird warbling away in the dead of winter back in December 2006. Stoker was out with fellow birder Dave Nadeau taking part in the Christmas Bird Count.
Feb 4, 2014 11:00 PM By: Kevin Ma 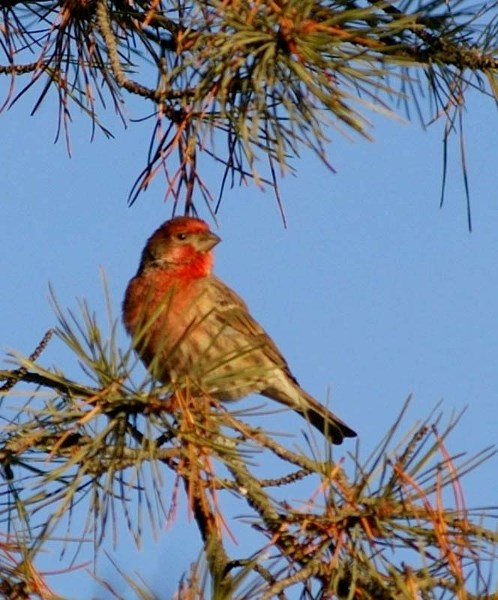 POPULATION RISE – The house finch is an introduced species that made its way to Alberta from the U.S.

Appearance:
Small finch with big beak, streaky brown back, rosy-red face and upper breast, with a red rump. Females are greyish-brown with thick, blurry streaks and no redness.

Commonly seen:
Camping out at your feeder, singing like it's spring.

Occasionally confused with:
Redpolls, which are just red on top; purple finches, which are nearly identical to them; house sparrows, which have black bibs.

Fun fact:
The redness of their chest is determined by the colour of their food, so you can get orange or yellow house finches. Female finches seem to prefer red males as it suggests they are better at finding food.

Like wildlife? So do we! Every second Wednesday the Gazette profiles a reasonably common wild creature in the St. Albert region. Birds, beasts, bugs, fish … so long as it's alive and kicking, we'll feature it. Got a creature you'd like to see profiled? Send your suggestions to [email protected]