Repairs of the BLESS observation platform begin as an Edmonton scientist seeks a solution for Canada thistle in this week's Environment File.
Jan 12, 2020 1:00 PM By: Kevin Ma 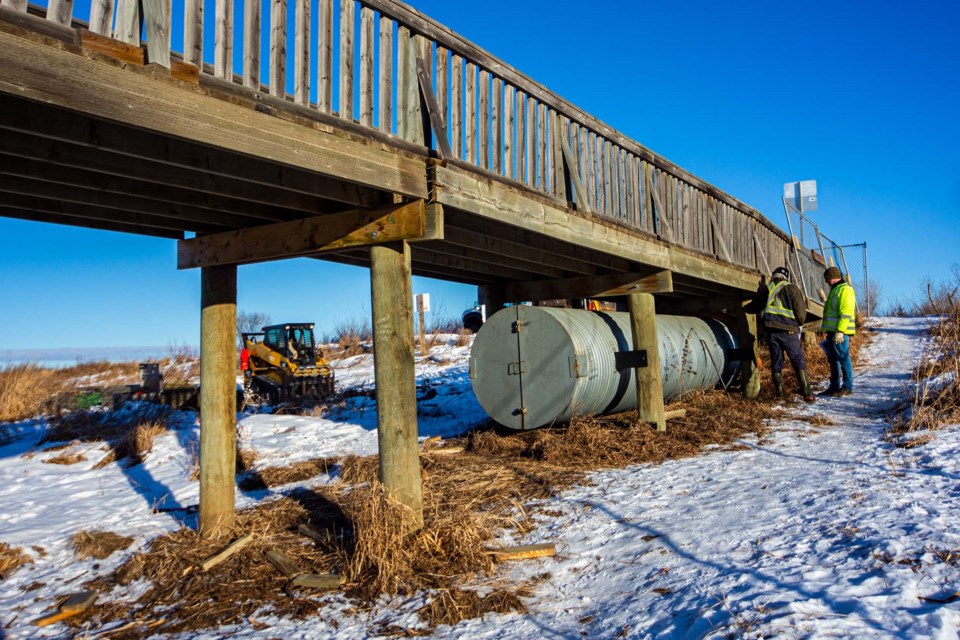 THE FIX IS IN – Contractors with Stony Plain's Formula Alberta prepare to start repairs on the BLESS viewing platform Jan. 6. The site has been closed to the public since 2017 after it was deemed unsafe. Crews expect to start work this week if ice conditions permit it. CHRIS COLBOURNE/St. Albert Gazette

Birdwatchers rejoice – repairs on the Big Lake viewing platform are about to begin after a three-year wait.

Built iaround 1996, the platform was for many years a popular meeting spot for birders and drew hundreds of visitors on most weekends. The city closed it in June 2017 after it developed a potentially dangerous tilt.

City council voted in July 2018 to repair the platform with new screw-in piles for $342,900. Part of that cost will be offset by a $125,000 provincial grant BLESS received last year.

In an email, city spokesperson Juliann Cashen said work on the platform would likely start later this week once crews confirm the ice is thick enough to work upon.

Crews will remove the platform’s deck framing, guardrail and the eight support pillars under the octagonal portion, Cashen said. Those pillars would be cut off at lakebed level and replaced with new screw piles. Crews will also install new wood and metal cross-braces, frames and guardrails. The repairs should be complete by March and are expected to last 10 years.

BLESS president Al Henry said it took this long for this work to start because the project had to go through an extensive environmental approval process.

“I think it’s tremendous,” Henry said of the start of the work, adding many birders would be excited to see the platform reopen.

Henry said he hopes the platform will be ready in time for International Migratory Bird Day in May. BLESS also plans to add new educational signage to the platform later this year.

Visit stalbert.ca/rec/parks/system/big-lake for details on the project.

Chris Saunders, a retired pest management biologist with the City of Edmonton, will give a free talk this Monday to the Edmonton Nature Club’s plant studies group on a potential new biological control agent for Canada thistle.

Canada thistle is a noxious weed found throughout Alberta known for its spiky leaves and urn-shaped, purple-haired flowers.

“It’s probably one of our worst weeds in Alberta,” Saunders said, as it’s unpalatable to many animals and out-competes crops and native plants.

It’s also very difficult to control, which is required under provincial law, said Hole’s Greenhouses horticulturalist Jim Hole. It spreads rapidly through roots and seeds, and requires either expensive herbicides or repeated mowing to stamp out.

Saunders said he’s looking for better ways to control the thistle, which is widespread in the Clifford E. Lee Nature Sanctuary southwest of Edmonton. At a recent conference, he learned Colorado had found a way to harness a rust fungus that attacks only Canada thistle and has long been found in North America.

“The fungus has an extremely complicated life cycle,” he said, but once it takes hold, it can wipe out 40 to 100 per cent of a Canada thistle infestation within five years.

Saunders said he harvested the fungus from two infested thistle patches near Edmonton last year and planned to test it on thistles in the Clifford Lee sanctuary this spring. (He is a director with the sanctuary’s management board.) If it works as advertised, it could be a useful tool for farmers and conservationists. He was not aware of anyone in Canada that was using the fungus to control Canada thistle.

While people are always interested in natural weed controls, Hole cautioned that natural controls often only work under specific conditions.

“If it (the fungus) is here, it’s certainly not controlling the Canada thistle.”