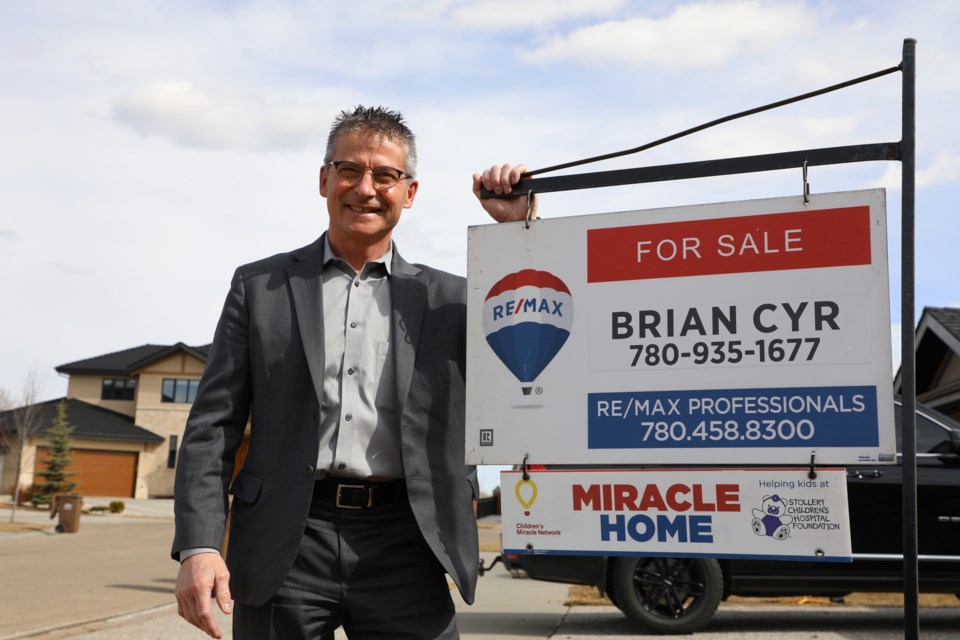 Hard work and taking care of people, that’s what Brian Cyr claims are his secrets to success. There must be more to it – and there is – with the announcement this week that the realtor with Re/Max Professionals has broken the top three for individual real estate sales in all of Western Canada (British Columbia, Alberta and Saskatchewan) for 2020.

“That's always been my mantra: just whatever we can do to help our clients, and at every step, every touchpoint, what can we do that's maybe better than what somebody else is doing? How can we just make their experience a little bit more positive? Just keep building,” he avers.

It’s a fine accomplishment but one that becomes even more dramatic when you consider the comparison of St. Albert’s market (where he does 80 per cent of his business) and how he was toe-to-toe with realtors in cities like Vancouver where the average property sales price is approximately $1 million, which is about two-and-a-half times what it is here. This ranking is based on sales dollars earned, not numbers of properties transacted.

The business isn’t really rocket science, he confirmed, and realtors don’t actually have a product: they’re consultants helping to sell something that’s basically intangible, meaning it’s all about what you know and what you can tell your clients.

There must be something to his mantra because he has earned top individual sales with the brokerage for the last three years.

Cyr started his legacy with a home building and renovation business for 15 years (check out his YouTube channel called ‘From the Ground Up’) before he became a real estate agent.

That background is the fundamental difference between him and other realtors because it affords him a level of knowledge that others might not naturally have.

“I understand homebuilding inside out, backwards, forwards, what things cost, what's possible, what's not. I speak from a very high level of knowledge about the home, about the product. What that does is that it gives me a significant amount of credibility when I'm dealing with buyer clients as well because they know I know what I'm talking about. If I were to point to one thing, I would say that's probably one of the key advantages that I've that I've been very fortunate to have. It’s certainly made a difference in how I'm perceived by a lot of people in the market just by having that. Whether you get a buyer or a seller, they appreciate having that level of knowledge behind them.”

Broker owner Shandrie Lewis congratulated Cyr, confirming that he is indeed a workhorse and fully earned his placing. He sees the value in collaboration with other agents and remains fully engaged with his colleagues in order to best serve his clients. On top of all that, “Brian's very, very humble. He's just the kind of guy that sees the value of being present. I think that's been a big part of his success is his engagement with our office,” she said.

In talking about the local real estate market that contributed to a fertile environment for him to realize his sales, she used the word “bananas.”

“He was top three for 2020 in Western Canada in all of Re/Max and so that’s even including Victoria, Vancouver, Kelowna, all those really hot markets. I think that's what makes it just even more impressive: the fact that St. Albert is a relatively small market compared to those other markets. He doesn't sell just in St. Albert, but he's a St. Albert-based agent and that's technically a small market. It's pretty incredible what he's done also in just such a short time.”

The fact that he has only been operational within Re/Max Professionals for several years is “quite unheard of, actually.”

St. Albert’s real estate market, though small, is definitely strong and is typically stronger than a lot of other regions. Lewis noticed the market here speeding up at the start of 2021, with properties selling a little bit quicker than the rest of the Edmonton region.

“It's a very, very desirable place to live and to also sell real estate. It's looking a lot more like a seller's market right now. I'm dealing with listings with multiple offers here almost every day. Anything under $500k is in demand. We can't hold on to inventory it seems. Good properties are selling very quickly. I would say (that) we have now crossed the threshold from a balanced market to a seller's market.”