Six candidates spoke at St. Albert and District Chamber of Commerce lunch on Wednesday.
0
Oct 20, 2019 9:00 AM By: Jennifer Henderson 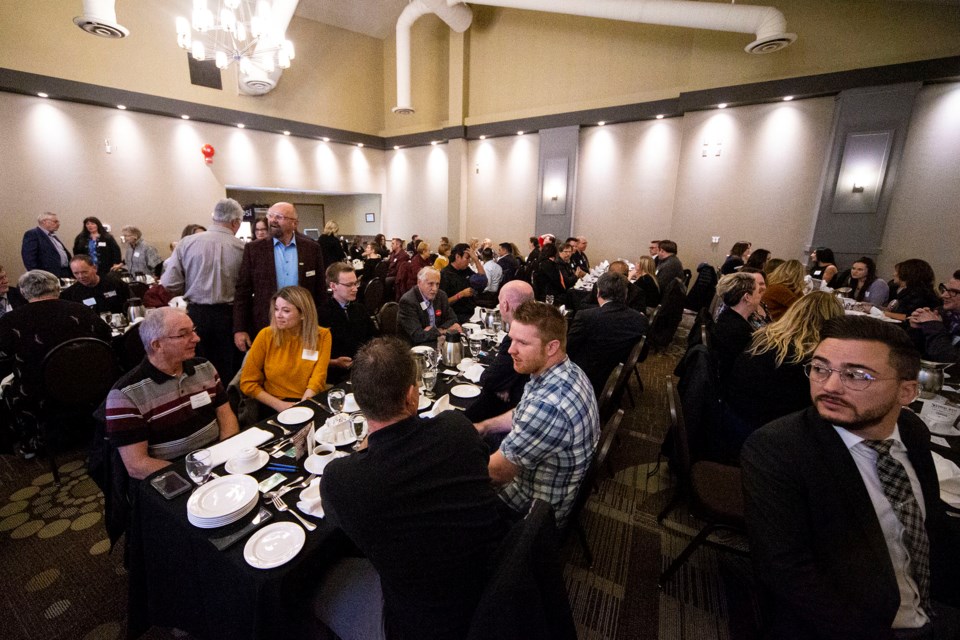 Political hopefuls for the federal St. Albert-Edmonton riding pitched their platforms to St. Albert's business community to sway local business owners to cast a ballot for them Monday.

On Wednesday afternoon, all six candidates running for the federal seat delivered a short speech to the business community at the St. Albert and District Chamber of Commerce lunch.

Lauri Forcade, who owns Forcade Virtual Assistant Services, said she was left wanting to know more after their speeches were over.

“They didn’t give me a lot of specifics. I would imagine I’d have to show up at the debate (Thursday) night,” Forcade said.

Forcade said she isn’t really comfortable with either of the leading parties right now and struggles with the idea of voting for the Liberals in the wake of the SNC-Lavalin scandal. She added she is concerned about the cuts a Conservative government could make.

"I’m going to really have to think about who I vote for.”

John Harrison from World Financial said he supports People’s Party of Canada candidate Brigitte Cecelia’s stance of climate change. Harrison does not believe in man-made climate change, and neither does Cecelia.

“I think the whole (climate) change issue is a waste of time.”

Harrison said it was good to hear the candidates and their platforms and said overall the afternoon was informative for him. He added he has been impressed with incumbent Conservative candidate Michael Cooper and what he has accomplished over the last four years.

Jarrett Delaney from Confections Cake Co. said the event was informative and he appreciated all of the candidates did their best to address the concerns of the business community.

Delaney said this election, it will be a bit more difficult to decide who to vote for, now that he owns a small business, which he started up two years ago.

“It's hard for me this year, deciding. My mindset has changed a lot over the last couple years after starting a small business. It's never been a factor for me before. It's a huge factor now and it steers my whole life, my family. And, you know, I'm still doing homework every day leading up to election day and it helped and honestly I haven't made a decision.”

Chris Siracky, who has owned Twisted Landscaping for the last six years, said he has already made up his mind.

“I’ve studied the platforms quite a bit and made an educated decision.”

Siracky said he doesn’t vote for the candidate but rather the party that best represents his interests.

Conservative Party member and incumbent Cooper is running for his second term in office. Cooper won his seat four years ago against incumbent Brent Rathgeber, was the official opposition deputy shadow minister for justice, served as vice-chair of the Standing Committee on Justice and Human Rights and was vice-chair of the Special Joint Committee on Physician-Assisted Dying.

People's Party of Canada candidate Cecelia is representing the newly formed party. Cecilia has lived in St. Albert for over 25 years and ran for a seat as a trustee for the St. Albert Catholic School District in the 2017 election.

Greg Springate is running for the Liberal Party. Springate is a professor at MacEwan University and a chartered professional accountant by trade. Springate is passionate about federal politics and has experience working federally with the Auditor General of Canada. The Edmonton resident said he audited departments like Service Canada and the Department of National Defence.

Rob Dunbar is the confirmed candidate for the Green Party in the riding. Dunbar has been living in Edmonton for over 25 years. Dunbar has worked as a corporate educator and facilitator, working in retail, running a kitchen as the executive chef and operating his own successful company.

Kathleen Mpulubusi is the NDP candidate for St. Albert-Edmonton. Mpulubusi has lived in northwest Edmonton for 20 years and has been a letter carrier with Canada Post for 16 years. She is active with the Canadian Union of Postal Workers as a union representative and member of the local executive committee. She serves on the executive council of the Alberta Federation of Labour and the Edmonton District Labour Council. Before working for Canada Post, Mpulubusi was a teacher who taught in Maskwacis and Zimbabwe, and taught English to new Canadians.

The Veterans Coalition Party Of Canada, a newly formed party, has candidate Robert Bruce Fraser running in the Edmonton-St. Albert riding. The party's platform includes having CPP no longer be taxed, repealing the United Nations Compact, having a four-year moratorium on all international aid, balancing the budget, meeting our nation’s commitment to its NATO allies, repealing the carbon tax and reviewing Canada’s refugee policies.