Whiting, who has not yet received any government supports as her application is still pending, said the money will be helpful but it’s going directly into her landlord’s hands.
Mar 3, 2021 2:30 PM By: Jessica Nelson 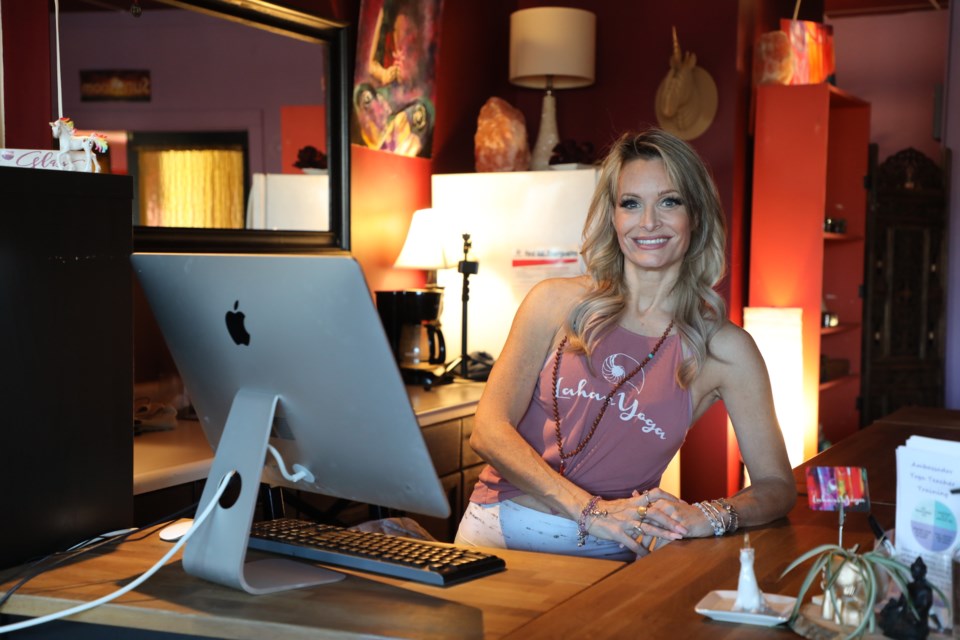 Larissa Whiting's yoga studio, Lahari Yoga, has been shut down since Nov. 13. The Alberta government recently announced additional supports for businesses that have been affected by the pandemic. Feb. 24, 2021.JESSICA NELSON/St. Albert Gazette

It’s been 100 days and counting since Lahari Yoga was last open for classes.

“We were shut down on (Nov.) 13th, and on my birthday this weekend it marked 100 days shut down – which I thought was sort of funny,” said owner of Lahari Yoga, Larissa Whiting.

Businesses that have been hit the hardest by public health measures are being offered additional supports. On Feb. 17, the province announced the Enhanced COVID Business Benefit which, starting in April, will provide payments to small and medium-sized businesses affected by the pandemic.

Businesses able to demonstrate a reduction of 60 per cent in revenue will be eligible to receive 15 per cent of their monthly revenue to a max of $10,000. Altogether, businesses could receive up to $30,000 in grant money.

Whiting, who has not yet received any government supports as her application is still pending, said the money will be helpful but it’s going directly into her landlord’s hands.

“It's going to still leave me tens of thousands of dollars in the hole that I'm going to have to pay out of my savings to just pay the landlord to stay open for this year," she explained.

“It's not a unique story – this is what many people are going through right now. It definitely takes the edge off but it doesn't cover the rent, let alone pay my groceries or put my kids in school or anything like that."

Before the pandemic, Whiting had three yoga rooms in her studio.

“All three were jam-packed to the max – it was just wonderful,” she said.

She had over 70 contracted workers and offered over 100 classes per week.

Now her studio is down to two yoga rooms. She has 10 staff that would be ready to come back when she opens up again.

Whiting does have suggestions for other supports that could be offered to small businesses.

“I think, personally, it would be really nice if the municipalities would step up and offer to help pay utilities because a lot of what I owe is actually for the utilities. I mean, I get rent relief. I get half the rent, but a gigantic portion of my rent is actually utilities, which you don't get any relief for,” she said.

Eligible organizations must have fewer than 500 employees. Businesses also need to report the levels of support they have received both federally and provincially to ensure they do not receive more than 80 per cent of their revenue through these supports.

Chantelle Beasley owns four Aradia Fitness locations across the Edmonton region, with one located in St. Albert. She has also been shut down since November.

She has applied for and has received all the grant money the government has offered small businesses and will be applying for the enhanced grant when applications open in the coming weeks.

Beasley thinks the government should have done things a little bit different with this grant.

“I look at my industry and how much harder it was hit than, say, a salon. The salon gets the same government funding and grants as we do. And, you know, I love that for them, and I think that all businesses should be set up for success," she said.

“I don't think that we should think about taking away their grants. I just think there should be an additional grant provided for gym owners because we've been hit really hard."

Beasley thinks the 60-per-cent reductions eligibility will end up qualifying business that are now open for business, like salons. Salons were closed for five weeks while businesses in her industry have been closed for three months and counting.

“I would say not that they shouldn't get this money but that there should be an additional grant, on top of this new one announced, for fitness studios,” she said.

Beasley would also like to see rent subsidies continue and a small additional relaunch grant. She does, however, understand the difficult situation everyone is in.

“It's a hard place to be, because where does the money come from? There's always that question, and it comes from taxpayer dollars so it's not like there's all this money just sitting there that the government has for unexpected pandemics,” she said.

The biggest misconception Beasley has faced during the pandemic is that it is simple for her business to pivot to online classes and that online classes solve all her problems.

“They don't realize that not a lot of people want online classes. So 240 of my members just immediately, as soon as a closure is announced, they just pause or cancel their membership, because there's so much free online content, and you're up against people who have been doing this professionally online for years," she explained.

“It's just not the same and it definitely nowhere equates to running an actual fitness studio – and we're pole dancing, too, so it's very specific and not like everybody just has a pole at their house, because they don't."