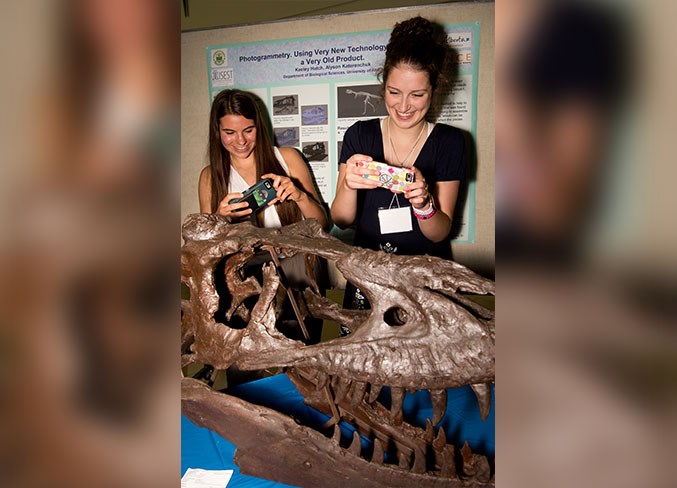 CELEBRATING SCIENCE – International Day of Women and Girls in Science is this Feb. 11. This UN-backed day aims to encourage women to get into science and technology fields and promote women scientists, such as Paul Kane's Alyson Katerenchuk (left) and Archbishop Jordan's Keeley Hatch, who are shown here explaining their photogrammetry work through the U of A's WISEST program last summer.

If you looked for a fisheries biologist at Alberta Fish and Wildlife 15 years ago, odds are you’d find a guy with a beard, says Laura MacPherson.

The Edmonton-based scientist says nowadays, it’s almost the opposite.

“Almost all the biologists coming in now are female,” she said, as are most of the ones behind them in university.

MacPherson is one of the many examples of women in science and engineering that will be celebrated this Monday as part of the UN’s International Day of Women and Girls in Science. Established in 2015, the date promotes the critical role women play in science and technology.

This international day is meant to raise awareness of the issues women in science face and highlight role models for prospective scientists, Gemmell said. Makonsinski has invented gadgets like a flashlight powered by body heat and has appeared on Jimmy Fallon’s talk show, for example, while Johnson crunched the numbers that helped put the Mercury space capsules in orbit and was one of the people depicted in the film Hidden Figures.

The UN reports less than 30 per cent of the world’s scientists are women and just 30 per cent of female students get into science and engineering during post-secondary. That gap is likely to widen, as some 65 per cent of today’s new students will have tech-driven jobs that don’t even exist yet.

Compounding that is the “leaky pipeline” problem where large numbers of women drop out of the sciences shortly after graduation or in their 30s and 40s, Gemmel said. Part of that is due to family life, as it’s very tough to pick up your career in a fast-moving field like science after nine-plus months off raising a kid.

Another is sexism. A study released this week by The Lancet found women who applied for grants from the Canadian Institutes of Health Research were four per cent less likely to succeed than men, but only when those grants were judged based on the quality of the applicant. When judged solely on the quality of the proposed research, there was effectively no gender gap.

This lined up with other studies that have found women are more likely to have their papers accepted for publication when reviewers don’t know their identity, have to perform to a higher standard than men to receive the same recognition, and receive lower teaching evaluations despite no difference in teaching effectiveness.

MacPherson said recent efforts to promote the sciences to girls appear to be having an impact on the field. While some of her colleagues still report discrimination from male co-workers, she said it’s much less common now than it was a few decades ago and the work environment in the lab was very supportive.

“We like smart people. Doesn’t matter if you’re male or female.”

The women and girls in science celebration goes on all day at the science centre and is free with admission. Visit telusworldofscienceedmonton.ca for details.