What the census told us about St. Albert

After a 10-year hiatus, Statistics Canada released the results of the long form census this year helping to paint a clear picture of St. Albert and the people who live here. According to the data from the 2016 federal census, St. Albert grew by 6.
Dec 22, 2017 10:05 AM By: Jennifer Henderson, Local Journalism Initiative reporter 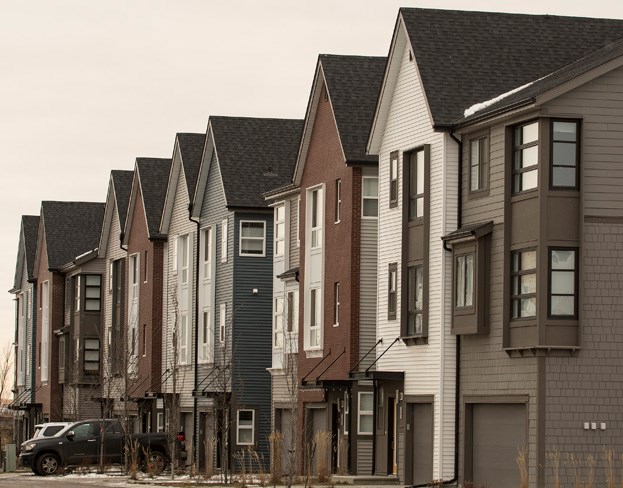 A row of condos along McKenney Ave. At Riverside Drive. Mayor Cathy Heron said there is a big demand for duplexes, condos and starter homes in St. Albert. Of the 23,955 homes in the city, 73 per cent are detached homes.

After a 10-year hiatus, Statistics Canada released the results of the long form census this year helping to paint a clear picture of St. Albert and the people who live here. According to the data from the 2016 federal census, St. Albert grew by 6.7 per cent in five years. In 2011 the city was home to 61,466 residents and by 2016 it had grown to 65,589. The steady growth of the city was not surprising to St. Albert Mayor Cathy Heron, who said that the city typically grows by around 1,000 people per year. Heron said that the steady growth is good news for the city, as it is easier to plan for. “We can have a 10-year capital plan that is as closely aligned to the needs as possible,” Heron said. Many communities around St. Albert saw a large population boom since the last census in 2011 and Heron said that large population spikes can make long term planning challenging for the city. The city of Edmonton grew by 14.8 per cent since 2011. By percentage, Spruce Grove saw the biggest boom in the capital region with an influx of 7,894 people driving the population growth up by 30.1 per cent. Overall the Edmonton metropolitan region grew by 13.9 per cent. Heron said that communities in the area with large booms are struggling to meet the needs of the rapidly growing population. “Not only do they need to build another library, pool and rink – like St. Albert does – but they are probably forced to build a new fire hall,” Heron said. The mayor also said that residential growth is more expensive than non-residential growth, because residents require more services while contributing less in taxes. Heron said that attracting non-residential businesses to the city is important to help fund services and amenities. The mayor noted that the city has been climbing towards the ideal 80:20 ratio of residential to non-residential tax assessments and in 2016 the tax assessment was 85.9:14.1. “Residential growth is a cost. There is never a cost recovery side on a home,” Heron said. Within St. Albert, most of the growth over the last two years has come on the north side of the city. According to the most recent municipal census released in 2016, North Ridge grew by 791 people since 2014 while Erin Ridge followed closely with 785 residents. The most populated residential areas in the city are Lacombe Park, Grandin and Erin Ridge, which together house just under one-third of the city’s residents. Overall, Canada grew by five percent or 1.7 million people between 2011 and 2016, pushing the population above 35 million. This makes Canada the fastest growing nation of the G7 countries. Immigration accounted for most of the growth. Within Canada, Alberta was the fastest growing province in Canada. The province grew by 11.6 per cent with the most growth happening in Calgary. The southern city grew by 14.6 per cent, making it the fastest-growing metropolitan area in the country. Edmonton’s capital region came in close behind with 13.9 per cent growth.

The province is attracting new immigrants and workers from across Canada and many of them tend to be younger. The average Albertan is 37.8 years old, while in Edmonton the average resident is 37.7. Across Canada the average age hit a record high of 41. St. Albert has an average age higher than the region but lower than Canada overall at 39.9 years old. The municipal census done in 2016 shows that St. Albert did tend to be more mature. The fastest growing age group was those between 70 years old and 74 years old with an increase of 318 residents. The federal census showed that the most populous five-year cohort in 2016 was the 50 to 54 group at 5,030 residents. The city is home to 12,210 children between the ages of 0 to 14, which makes up 18.6 per cent of the population. Seniors, who are aged 65 and older, make up 15.3 per cent of the population with 10,065 residents. The working population in the city, who are people aged 15 to 64, make up 66 per cent of the population. Heron said she suspects that while many younger workers and migrants are drawn to the area for job opportunities, St. Albert attracts the more established families in the region. “I think initially when they move to the region St. Albert may be a little bit out of reach in housing prices but as they get older they can afford to live here,” Heron said.

Heron said that the population that is attracted to St. Albert is directly tied to the housing availability in the city. The mayor said that the type of housing that the city offers draws in families with higher incomes with the ability to purchase detached homes on the larger lots the city offers. Using the data from tax returns in 2015, Statistics Canada ranked St. Albert as the municipality with the 16th highest income in the country. In 2015, St. Albertans had a median household total income of $119,905, which is a 14 per cent increase from 2005 when the median income was $105,106. The median total individual income in 2015 was $52,581. When separated for sex the median total income for men was $69,820 and for women it was $40,172. The province had a median household income of $93,835, which sat above the rest of Canada that hit $70, 336. Edmonton finished with a median income of $87, 225. Sturgeon County came in one spot above St. Albert with an average median household income of $121,984 and Morinville fell below St. Albert with $110,896. St. Albert also has a higher rate of education when compared with the rest of the region. Around 71 per cent of the population over the age of 25 has a post secondary certificate, diploma or degree while that number drops to 65 per cent in the Edmonton Metro Region and 64 per cent across Alberta. Residents in the city have a higher rate of completing high school with only 5.7 per cent over the age of 25 holding no certificate, diploma or degree. In the Edmonton region 9.7 per cent of residents do not hold a certificate, diploma and degree while Alberta sits at 10 per cent. Heron said that although it is great to have high incomes and education levels in the city, she said it would be nice to attract residents of all income and education levels. “I would never want to say I would like the average household income to go down in St. Albert but I feel like there needs to be a place in St. Albert for everyone,” Heron said. Heron said that in 2018 council will be changing the land use bylaw to make St. Albert friendlier to all income levels. She said the region has a booming market for homes in the $300,000 to $350,000 range and St. Albert’s land use bylaw makes building new homes at that price very difficult. In the last few years Heron said that the city has increased the amount of rental properties in the city but they are still lacking the “missing middle.” She said that they city does not have enough duplexes, condos and starter homes to attract and keep families who are buying their first or second home. “Pretty much every one of the changes that we have been considering over the last year on the land use bylaw have been focused on getting that missing middle,” Heron said. Hero said she want to continue to try to provide housing to the aging residents who may want to move out of their big homes and downsize into condos. Right now the average household size in St. Albert is 2.7 people who live in 23,955 dwellings overall. The majority of the residences are detached homes with 17,535 in the city. Some 84 per cent of residents own their home in the city, with the remainder renting. In the Edmonton region 70 per cent of residents own their home, while 30 per cent rent.

The census revealed that many St. Albertans  commute to Edmonton and the surrounding area for work. Some 65 per cent of residents travelled outside the city for work, with 86 per cent of those workers driving themselves rather than carpooling or taking public transit. About 33 per cent of the population is employed within the city limits. The city continues to see a gender split in career paths with many more men working in trades while women dominate healthcare and education. Of the 5,705 residents who work in trades, transport and equipment operators and related occupations, 93 per cent were men. Some 2,780 community members work in health occupations and 85 per cent are women. Some 72 per cent of the educational services employees in the region were women. The city does a municipal census project every two years. The last municipal census was done in 2016. The next Canada-wide census is slated for 2021.