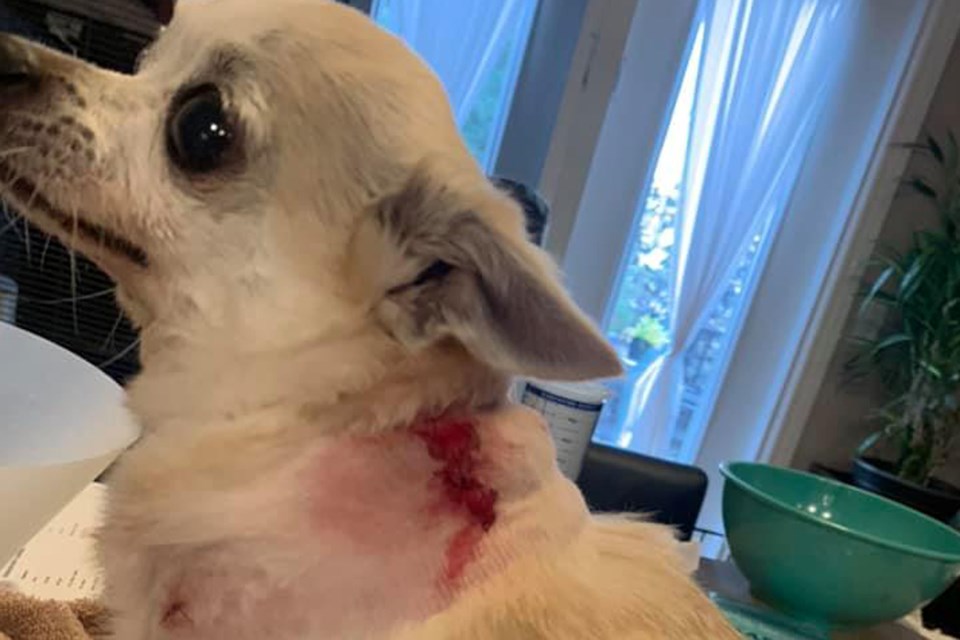 Tony the Chihuahua needed 40 stitches after being attacked by a hawk.

Two Grandin pups faced off against a hawk last week and lived to tell the tale.

Tony the tiny Chihuahua was outside enjoying his backyard Friday after a long week when he was suddenly attacked. A hawk swooped down and dug its talons into the dog, trying to carry him away.

Thanks to the protection of another Chihuahua, Jagger, Tony survived the ordeal.

Tony lives in a house in Grandin with his mom, Sherry Theriault. That day, Theriault's daughter, Kim Bellerose, had come to let him out into the backyard along with her own pup, Jagger.

The duo were minding their own business after doing their business when the vicious attack occurred. Bellerose had left moments before, forgetting to close the back door and bring the dogs inside, and they were outside alone for just five minutes before Theriault returned home.

When Theriault came into the house to find the back door open, she went outside to grab her cats who had also slipped out. A few minutes later, she was approached by her tiny dog.

"Tony had come up to her and she noticed he was covered in blood," Bellerose said.

At first, Theriault thought her cats had attacked the nervous little dog, because they had gone after Tony before. The family quickly called around to vets to find one that was open at 5 p.m. on a Friday, and rushed him to the Crestwood Veterinary Centre in Edmonton.

The vet sedated Tony, shaved him, and sewed him up. Three open wounds on his side, three claw marks and a bite mark on his neck, along with some other scratches and punctures, required 40 stitches.

The vet told Theriault and Bellerose Tony was lucky to survive the severe trauma to his body and there was a concern that his heart would give out from the shock.

“When (the vet) came out they said it was definitely a hawk. They saw the injuries he had and he had the three claw marks where they picked him up,”

The cats, who were also likely outside at the time, were unscathed in the incident and Theriault found them hiding underneath the swing.

Bellerose said the only reason she believed Tony wasn’t carried off in the attack is because her dog Jagger is protective of Tony. Jagger, who was unscathed, likely barked at the hawk to scare it off.

“He's very protective. And he's very aggressive in that way, not toward people, but if somebody were hurting Tony, he is very aggressive. We have seen it many times before."

“I think the only way he was saved was my other dog probably went after that hawk and allowed Tony to get away.”

Bellerose is sharing her story with the community because she wants people to know to keep an eye on their pets in their yards.

“I just want people to know and I don’t want them to let their dogs out alone,” Bellerose said.

“It’s not anything you think of until something bad happens. We were more concerned about the coyotes.”

The dog was released from the vet on Friday and sent home to rest. Tony is in a lot of pain but he is expected to make a full recovery from his injuries.

Along with suffering life-altering injuries, Tony will never be able to go to the bathroom unsupervised again.

“It’s definitely scary to no be able to let your dogs out in the backyard alone. We have to be out there.”