Many kids moved to centres in north Edmonton and away from the friendships with adopted 'Grandmas' and 'Grandpas' at the building destroyed by fire May 6.
May 13, 2021 1:30 PM By: Anna Borowiecki 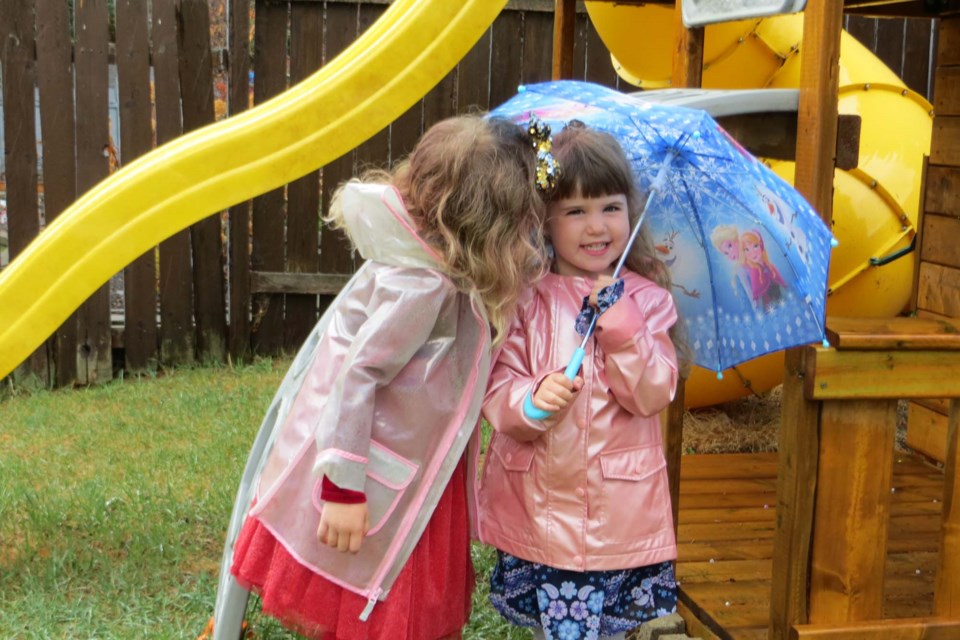 Sloan Crouse plants an affectionate kiss on the cheek of best friend Ruby Lewis. Both girls struck up a solid friendship at YMCA Citadel Child Care Centre, now closed due to a devastating fire May 6. ANNA BOROWIECKI/St. Albert Gazette

Sloan Crouse and Ruby Lewis like to tear around play parks giggling, hugging, and whispering secrets to each other. Even when dressed in holiday finery, the two five-year-olds find it tough to sit still.

Their budding friendship blossomed and was nurtured at YMCA Citadel Child Care Centre located inside Citadel Mews West, a seniors’ continuing-care facility now closed due to a devastating multi-storey fire May 6.

“It was pretty shocking to hear. The daycare and the caregivers had been a big part of our lives. It’s such a safe place, and I know it’s a place she loves. And it was instrumental in my life, too. I’m heartbroken for the staff. But it could have been much worse,” said Shandrie Lewis, Ruby’s mother.

At one point, Sloan said, philosophically: “None of our toys were taken out.”

To which Ruby sagely replied: “But it was a good thing everybody got out safe,” a sentiment echoed by everyone in the room.

The 33 children from six months to five years, formed a special bond with seniors living at the retirement community. Since both young and old were located in the same building, the elderly would visit the daycare once a week to read stories and make crafts with the children.

The newly adopted “Grandmas” and “Grandpas” also hosted a Halloween March where children would go door-to-door in the residence bagging treats and good wishes. At Christmas the young singers reciprocated with a goodwill concert. It was an ideal match until the fire tore through the south and east of Citadel Mews West.

The fire was burning intently by 8 p.m. that night. No one was working at the daycare at the time, however tweets and text messages quickly exploded on social media.

“I live in Deer Ridge and I could see the flames. Word quickly spread among the YMCA team. We mobilized and initially reached out to the families to let them know we wouldn’t be able to provide child care the next day,” said Michelle Hynes-Dawson with YMCA Northern Alberta media relations.

By Friday afternoon, new spots for fire-devastated cohorts were made available at YMCA Castle Downs and YMCA Kipness child-care centres in Edmonton.

“Some parents may choose to put children in daycares closer to their work. We wanted to work with families to offer them as much flexibility as possible and to offer what was best for them,” said Hynes-Dawson. “Even if parents didn’t know what they would do by Friday, it was OK. We would still keep in touch with them.”

As of Friday night, Lewis was one parent who was unsure whether driving Ruby to an Edmonton location was a good idea.

“It’s a whole different challenge. There’s not enough space for all of them in one place, so they’ll have to split them up. Realistically, I don’t want to send her to another daycare in Edmonton,” Lewis said.

At the writing of this article, no one from the YMCA team had been permitted to enter the building to assess damages.

“There’s a fire investigation still ongoing. Once the investigation is complete, we’ll have a more complete picture. We’re eager to have answers, but we respect the process and will wait to hear along with everyone else,” Hynes-Dawson said.

At the moment, it is anyone’s guess as to the destruction. Hynes-Dawson said it's safe to assume there is damage to the play area, toys, shelves, books, tables, and chairs.

“There wouldn’t be as many of the children’s personal belongings because of COVID. We do keep some food on site to provide snacks. We would have an administrative office with technology and files. And with Mother's Day, of course there were projects. And we do like to display children’s art.”

She said the child-care centre is committed to St. Albert families and hopes to be back in service as quickly as possible.